Currently, DCM credentials appear to only be used in combination with a DCM Data Source.

For ease of use for my end users (non-Designers), I would like my end users to be able to save a user ID and password as a standalone DCM credential.  Then, I want the user to have the option to select that credential for use in two places:

Having this functionality would remove administrative burden from both our Designers and the end users they support.

We would like to have the option to configure the timeout of the manual running jobs, as already exists for the schedule jobs.

I would like to be able to view all schedule results from all users in my Gallery.  Currently, I can see the "Workflow Results" for any schedules I create.  But I cannot see them for users unless they share them.  As admin, I want an option on the Gallery Admin screen just like there is on the Gallery user screen to see "Workflow Results" for every schedule that is in the Scheduler Database, regardless of who the user shared it with.

Currently, the only way to accomplish this is to go to Designer, View Schedules, connect to the Controller, and go to the Results tab.  This should be built into the Admin screen in the Gallery.

Add ability to delete a user from gallery

currently, there isn't any way to fully delete (safely) a user from the gallery. So if there is a previous client or previous employee in gallery, we cannot clean up the gallery settings - only "disable". It would be great to have a "trash can" symbol next to the users where we can remove them from the server and keep all of the users clean.

I would suggest a service split to simplify maintenance actions in the Alteryx Server.

This service split will help perform some maintenance tasks and enables the Platform Administrators to shutdown the platform correctly shutting down the services in the correct order.

Usage Example 2 (Changes in the worker configuration - By doing this the users will still have access to the gallery and their jobs):

Usage Example 3 (Changes in the Gallery Page or Configurations):

Add ability to disable all schedules temporarily on server.

One of our Server customers has a need to disable all schedules temporarily across all worker nodes.  I do not see an easy way to do this unless we go into each worker's settings and disable from there, but this is not ideal.

The reason is for scheduled maintenance windows during a large upgrade or migration.  Currently stopping the Alteryx Service on each worker is time consuming.

Status: Not Planned Submitted on ‎01-04-2021 09:55 AM Submitted by FilipeCosta on ‎01-04-2021 09:55 AM
9 Comments (9 New)
We noticed that the Alteryx sessions are tab oriented and not browser oriented. When opening a new tab the user is compeled to sign in again.
We would like to have an option to make the sessions more browser oriented like a "keep me signed".
Ex:
- Opening a new tab
- Going to the gallery through a published app link
See more ideas labeled with:
45 Likes

It would be very useful to have a standardized method to set up notifications to the server admins and to the job owner themselves if an alteryx canvas fails (error).

My understanding is that currently the only way to do notifications on failure for every canvas is for every canvas to individually set up events.   On a large implementation, this becomes very difficult to manage.

user interface settings to be set and/or remembered

1. Sorting of content to be saved: Cohoseing wether to sort by name, date, type or all

2. number of entries displayed to be saved, 10 is not a good default

Currently, to allow a user to schedule jobs, prioritize jobs, assign jobs, create collections, or have API access, toggles must be set at the user level.

As a server administrator, I want to configure these toggles at the group level, so that a) I don't have to modify a large number of users individually to grant them such permissions, b) I ensure consistency across groups of users that doesn't rely on humans clicking all the right things for each of the relevant people, and c) I can easily change these settings for multiple people, if needed.

I would like to see some functionality in the Alteryx Gallery in which you can select multiple schedule workflows to disable/enable. Currently as an admin if I have many schedules I need to enable/disable I need to go into each schedule manually to disable or enable. This is okay for one or two, but I have about 20-30, it is very time consuming. I would like to see maybe some checkbox functionality next to the workflow to select and then an option to either disable all selected or enable all selected.

Currently one of the pain points when looking at integrating Alteryx Server into an organisation, is the role of a Curator, and who should be given that role. Of course, from an IT perspective, they want governance and control over data connections, users, and configuration - as it is important that users aren't simply able to change the default role to Curator and give all users access to the Administration portal, for instance. On the other hand, a Super User is typically given Curator access to allow for adjustments to all other sections of the Administrator Portal, that IT quite frankly don't care about.

What would be useful, is for a new role to be created, elevated from Curator. Let's call them 'Super Curator'. These 'Super Curators' (or, User-Curators, for a less exciting name) have access to all of the Admin portal as usual. 'Curators', would now only have access to the following (Highlighted yellow for Curator access):

This would aid the conversation from an IT perspective, allowing them to take control of user, data connection, and credential administration, whilst leaving the rest of the control to the other Curators. As this wouldn't always be a requirement, it would be useful to allow for a toggle of this setting within the Configuration on the Gallery. This would also not effect pre-existing setups of curators, as in the update of implementation, all current Curators should be adapted into 'Super Curators'.

Currently Alteryx has a timeout setting at a worker level which applies to all of the workflows/schedules that run on that node.

It'd be great and very useful is that setting is made available at a granular level like at the Collection/User Group or workflow level.

I've been told by Alteryx support that this is not a feature that is currently available. Hence proposing an Idea on the community requesting for such an ability!

Multi-Forest as well as Multi-Domain support for Windows authentication

We have several clients that operate in a Multi-Forest environment due to mergers and acquisitions.  Currently with Alteryx Server the only option we can offer them is to use Built-In authentication.  A lot of corporate and particularly finance institutions prefer a single sign on approach and utilise Windows authentication to do this.

This would really benefit us in selling Server in to organisations with complex structures and reduce friction in publishing or preparing workflows.

I have a support case (#00278355) advising unsupported changes to the alteryx.config file, involving an undocumented setting for chainedTimeout, as in:

This setting should be documented, supported, and made user-configurable through the System Settings GUI.

Hello, I would like improved user management features and/or training

I work at a large organization where Security and Privacy are of utmost importance. The ideology that we need to follow is Least Privilege and Need to Know.

We (Curators) do not want all the Artisans to publish workflows to Home Page, either knowingly or unknowingly. We however do want to allow a few power users to publish their work in Home Page, but currently the Gallery does not provide the ability to pick and choose who can share workflows publicly. We are educating users to not share any contents publicly, but as we scale up, it will be difficult to manage and govern this.

I'm suggesting to implement a global Yes/No feature that will Enable/Disable Artisans to publish contents in Home Page (just like the way we have for Jobs/Scheduling feature). Further, in Users section, Edit User setting needs to have a Yes/No button that will allow Curators to let certain Artisans place workflows in My Company's Gallery.

Organizations that never want any workflow to be shared publicly can disable this feature using global Yes/No button. Organizations (like the one I work at) that want to enable this only for certain Artisans, can set the Global Yes/No to No, and then in Users tab, they can pick and choose the Users that need this functionality (which will override the global default). Finally Organizations that do not really care about this functionality can just set the global setting to Yes.

Hoping other organizations find value in this functionality as well. Thanks.

Currently the e-mail settings for the server are set up using a wizard and are not available within the admin UI.

Please could you add an explicit section to the Admin UI to allow the admin team to set up approved SMTP settings, allowing this all to be managed in one admin console.

Further: Can you allow the admins to push these settings down to the desktop users.   This would allow the admin team to control the SMTP usage and prevent data leakage.   It would also reduce complexity for the user since the SMTP settings are all pre-set making eMail tools; and Events easier to set up. 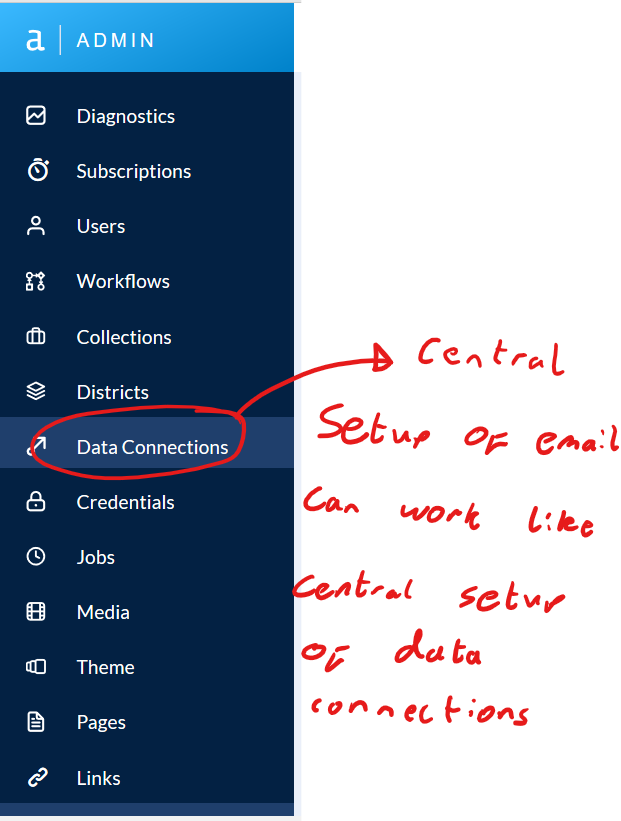 Currently the server diagnostics (http://localhost/gallery/admin/#!diagnostics) covers a narrow time window (from what I can see - only the last few hours)

.... and if you attempt to zoom out or pan to see a broader time window - the graph gets smaller, but the data does not grow to fill the remaining space

Please could we request 2 changes:

b) Increase the time available for analytics to an arbitrarily broad set of data (which the admin can configure as a server setup parameter - retention period).   For us - we'd want to keep at least 3 months of data, and be able to view this analytically.

Control the workload in Alteryx Server

*This is an idea from @cneivam  from the Portuguese Community*