I've seen various solutions/workarounds but this seems to be a table-stakes ask?  When scheduling a workflow I should be able to specify which parameter values to run with.  Just two of many use case examples -

Use case #1 - a single analytic app could be scheduled multiple times, each schedule specifying a different line of business

Use case #2 - credentials, allow the user to schedule a workflow with their saved credentials.  When their credentials change all they would have to do is update the schedule parameters

(If you know a better way I'm all ears, not the API thought that isn't a bad way to do it, just not super Easy) 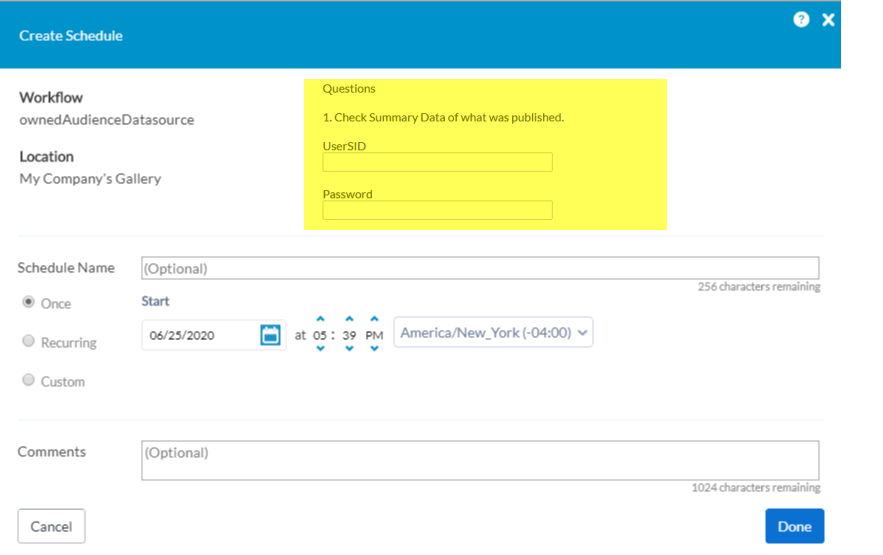 I would like to see the enhancement of being able to schedule a start and stop time for specific jobs that need to run multiple times per day, so they don't run during the nightly backup periods of the Alteryx server. This can cause the daily backups of the Alteryx Gallery to fail. Currently SQL Server Management Studio/SQL Server has the function to able to schedule start and stop times for specific job. Currently Scheduler page on Alteryx Gallery/Server lacks this feature. 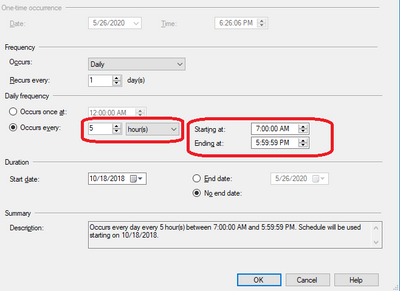 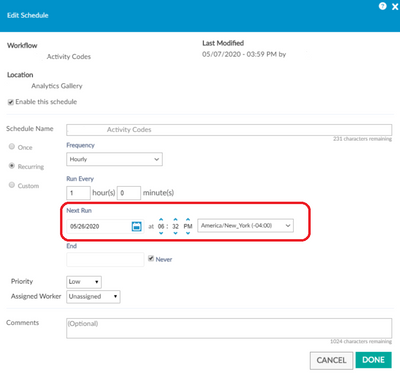 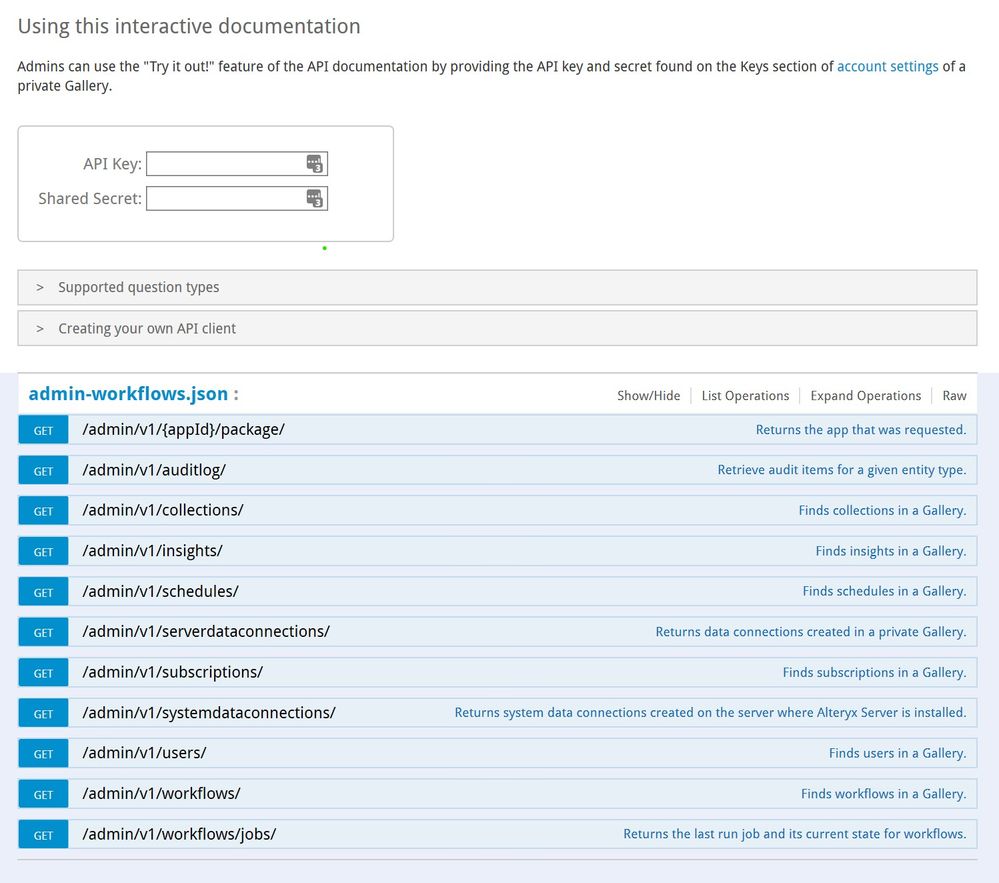 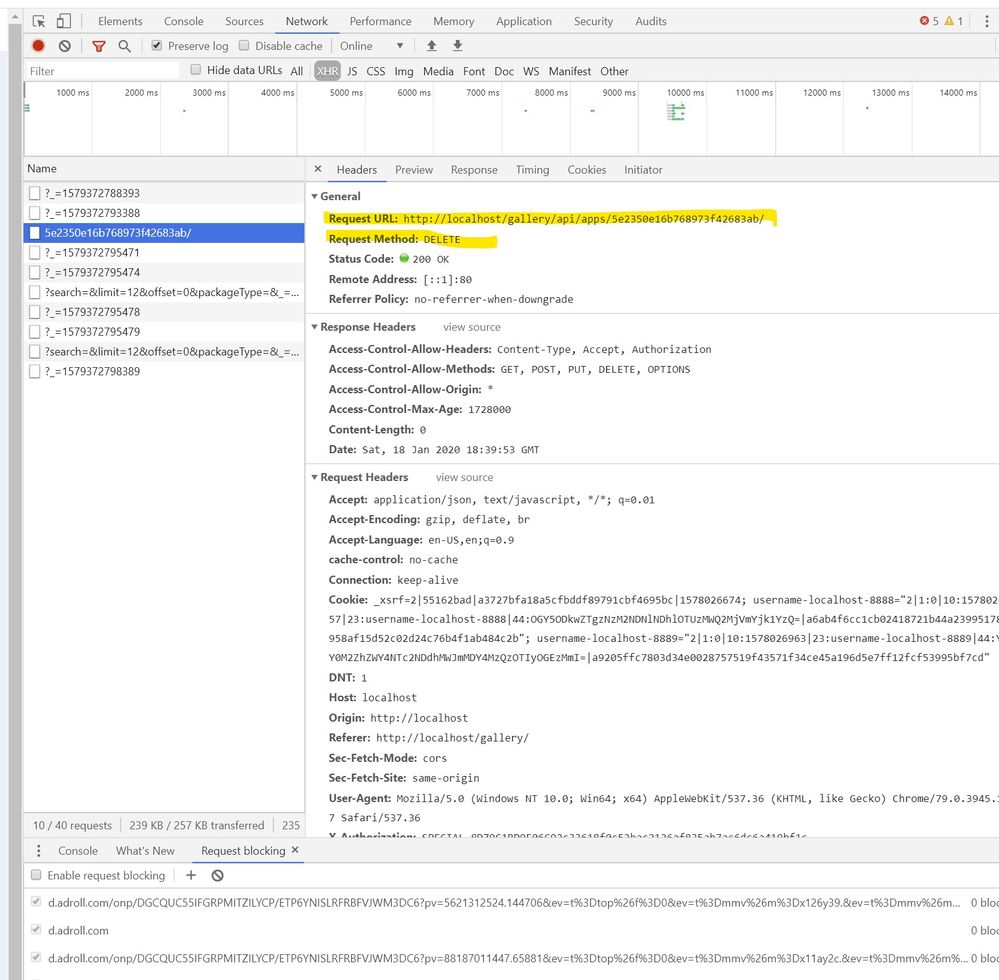 I would like to set a retry count when scheduling a job, and also to specify to duration in between retries, e.g. job fails, but then will retry to run 3 times with a 5 minute wait in between each retry.

Also would like a radio button next to all workflow results, so when you get a list of failed jobs you can click all the jobs and then hit rerun.  This should be complimented with select all functionality.  This will prevent me from having to go into each job and rerunning, i.e. save me loadsa clicks!

This idea has been touted in different flavours over the years (but not implemented), but I'd like to push it a little further:

1. Create the ability to collaboratively edit an Alteryx workflow - e.g. like you can edit Microsoft documents collaboratively. If the front-end is primarily an XML interface, this should in theory be possible?

2. Version control (not version tracking) - i.e. automatically state the differences in scripts between versions and allow for checking in and checking out of code

3. Power BI & Tableau Prep have the ability to see exactly what changes were made and to reverse steps to get back to a specific stage of development: it would be great to have a panel that tracks all the edits you've made since you started editing the workflow

In simple terms, a modern, interactive way for multiple developers to work together, but also to encourage the use of Server to "check in" your application and to avoid developers saving the same file over & over again locally.

I would propose that the internal APIs for Collections and Scheduler be exposed to the Admin Key/Secrets so that we can use these APIs to move our Users workflows directly to their collection or automatically schedule for them, if needed. It seems that all this would take would be to release the Authorization from internal to the Admin on the API.

APIs I am requesting be released:

Ability to change the default workflow settings when to also include [Others may view this workflow's history] in a similar way to the other attributes in workflow settings that are set by default.  This would prove beneficial for workflows which are shared across a large team and need to be run on a consistent frequency and are not run headless.  The inability to set this by default leaves a risk that the setting remains unchecked and more than one user triggers that workflow in a given month which could result in a material impact if the output of that workflow is posting to another system in the firm.

I would like the ability to add Groups to a collection as well as individual users. This would make things a lot easier for situations where large sets of users needed to be added to a collection at once, or removed at once.

Hello,
One of the frustrations we have faced in using Alteryx Gallery is the question "How do we set up many users with their respective collections easily?".

If we take for an example, the scenario where a company has 300 potential users of the gallery, who are all going to login and generate a report based on their department.
In order for them not to be able to generate the reports on other departments, the report generation workflows are put into collections. The current solution to this (atleast on SAML Authentication), is for a user to sign up, and then a Curator to assign them to their given collection. This is fine for small scale solutions, but the purpose of server is allowing for large scale deployment and automation of tasks, and this is far from ideal for a larger company.

If the server is setup on Windows Authentication, the users are able to be categorised within the Windows Active Directory, and then these groups (which may pre-exist) are able to be added to the gallery straight from the AD (see here), however this is not a feature within SAML Authentication.

From my knowledge, SAML Authentication should easily allow for this functionality, and it works very similar to Windows Active Directory. I mentioned this on a call with a Customer Support Engineer, and he explained that this wasn't part of his known roadmap for the Alteryx Gallery.

I do believe this to be an extension of a current post on the Alteryx forum, however, this details opening the API to allow for this on an API level, however I would also suggest for this to be integrated within Alteryx Gallery, as not all users are experienced with using, or building tools around, the API.

View the Workflow Results for an On-Demand Workflow

Currently you can only view the workflow results / history for other users workflows that are scheduled and the schedule is shared in the collection.

A lot of our workflows are set up to run on-demand, some as analytical apps and some as standard workflows.

The first point of reference when a user experiences an issue should be to view the workflow results, but currently this is not possible and just gives an error "Access Denied" even when the tick box is selected within Workflow settings.

My suggestion is that you should be able to see the workflow results of any workflow that is shared with you (regardless of whether it is scheduled or run on-demand) as this would make fault finding and user support much easier.

From which collection was the user executing/scheduling a workflow? Indicate in MongoDB.

When I publish a workflow, I want it to have different behaviour based on the collection from which it was executed or scheduled. Let us suppose that I create a DEV collection and a PROD collection. The workflow is shared in both. If the workflow is executed from DEV, then I will have some logic to do X (output to specific folders, etc). If from PROD, the logic will do Y. The logic will be up to me. If the collection information is captured in the MongoDB layer, then I can pull it out on the fly by joining the collections, appInfos, and AS_Queue or AS_schedules collections. Querying the DB on the fly during execution and pulling that value is trivial. Once I have it, I can use it for any sort of logic as an environment sensing variable. Can you please store the info in MongoDB?