So while working through a workflow that takes up a bunch of canvas space, I find myself jumping between two points, one at the beginning and one at the end. Every time I need to jump to the other point, I have to zoom out and scroll over and down and then zoom back in.

What if there was a tool that you could drop on the canvas as a "point of Interest" that if you select it (perhaps) on some other part of the interface, takes you right to that spot in the workflow. I know that currently you can look up tools and it will take you to the location of the tool, but it can be difficult when you are jumping around 4 or 5 different spots to remember which tool number is which.

I would use this all the time!

There are some hotkeys for jumping from beginning and end of workflows (Shift+Home, Shift+End). The only other thing I found helpful is to put points of interest in containers and move them around. If you are adjusting the tool names you can search for those or you can do the full canvas view Ctrl+Alt+V and hide it in the lower corner.

I wish they had a hotkey worked like a browser, it went back to the last selected tool, no change adjustment just the canvas view.

Bookmark a tool or spot on the canvas that you can click on a link and it will direct you to that location. Similar to a word document bookmark. Would be a nice feature for 500+ tool workflows and you could put the links in a container box at the front of the workflow. I realise there is a find tool function, however, you cannot put wording/justification across that which is what the bookmark would enable.

I was coming here to submit this idea, but now I'll just chime in with the following:

Apart from a few zooming shortcuts, navigation in the Alteryx Designer is a constant chore of zooming in and out and panning and then zooming in a little more because the anchors aren't big enough to click on, etc. It doesn't have to be this way.

In almost every software IDE worth its salt, there is a bookmarks feature. This allows you to rapidly jump to points in the code. In my favorite text editor, UltraEdit, you can set/delete a bookmark by pressing Ctrl+F2 and then cycle through them by repeatedly pressing the F2 key.

Obviously, the GUI experts at Alteryx will create a design that make the most sense for Alteryx. But to seed their imaginations, I think that there are a few possibilities for this feature

1 - Create a new canvas object called a bookmark and would probably live in the Documentation toolkit. When selected, the Properties window for that bookmark tool would appear and allow you to configure that bookmark as well as manage the other bookmarks, including their order. The UI could signify the bookmark with no background and a dashed outline, for example. 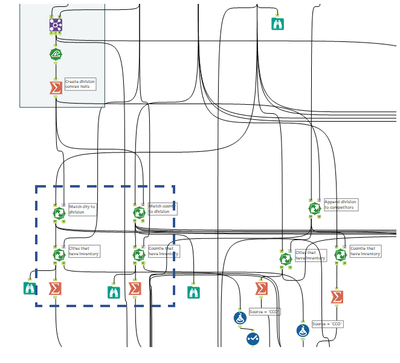 2 - If a new object is not wanted, start by giving each Container tool the option of having a bookmark associated with it. But I could also see this being an artificial limitation if a user wanted multiple bookmarks within a single Container.

Regardless of the final implementation, I think this is an idea that would rapidly make navigating a workflow possible with the least friction possible.

Previous work on this idea:

1 - During research for this idea, I found the Bookmark macro (https://www.dropbox.com/s/aqgfxxhwv85ldn6/Bookmark%20Macro.yxmc?dl=0) written by @chris_love. I think this is a step in the right direction, but think there could be more ease of use added to the feature. For example, I'd rather not have to use the Find tool interface at all.

2 - Back in 2015, there was a call for this idea (https://community.alteryx.com/t5/Alteryx-Designer-Ideas/Alteryx-Canvas-Bookmark/idi-p/5684) that was subsequently marked as Implemented. A description of the implementation can be found in the Canvas Navigation in Alteryx document (https://community.alteryx.com/t5/Engine-Works-Blog/Canvas-Navigation-in-Alteryx-10-1/ba-p/9224) where there is a section on how to zoom to containers using the right-click menu. Again, a step in the right direction but a) all containers are included by default and b) still no keyboard shortcut to cycle between them. 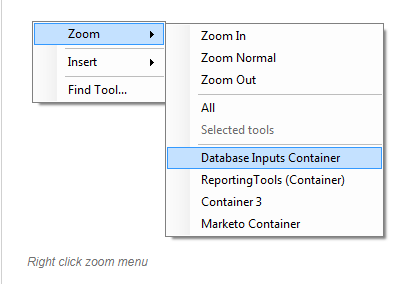 I'm updating this idea back to the New Idea status as it has reached the required amount of engagement to be no longer considered inactive. This idea will also now enter the process of being brought to the product team's attention.

Thank you all for your feedback!