If I understand right, currently, Alteryx only accept projection defined with WKT, but not support WKT as an input or output spatial object.http://downloads.alteryx.com/Alteryx/Help/Projection_Support.htm

A good article demonstrated how to work around before Alteryx can help to do this inside current spatial object output. I think it shouldn't be too difficult for the Talents in Alteryx to integrate this inside Alteryx, hope it is heard by the Alteryx people.

"Flights of the World: How to map great circle routes in Tableau 10.4

A short-cut. Writing directly into a TDE

If you know that you want to use this data in Tableau (and you have the Personal or Professional Edition of Tableau Desktop), you can take a shortcut and write your routes directly into a Tableau Data Extract (TDE) file using the TableauSDK (SDK = Software Development Kit). The SDK supports several languages (C, C++, Python, etc.). We used the Python version to turn the routes created using geographiclib into a TDE.

A benefit of writing straight into a TDE is that the files are much smaller because coordinates for each route are compressed into our spatial data format as you drop them into the TDE."

Hope this is something the community also support

I recognize that the Polygon for Tableau tool covers the use case presented in this idea, but the ability to convert WKT to/from Spatial Object is an important one for working with spatial servers.

For input to Spatial object, the Poly-Build tool will not build a polygon with holes.  If you have one, there must be a convoluted process to cut each hole out of the object (who knows how many there will be).

Converting from Spatial object to WKT is a little bit easier, but comes with some of the same problems of identifying holes and correctly ordering point sequences (polygons read clockwise and holes read counterclockwise).

Many web services and programs use WKT to pass spatial information, and in order to use these services it is imperative that we are able to make these conversions.

If this question is too focused on the Tableau aspect rather than WKT, I would be happy to post this as a new idea to get visibility.

@StephenR  Thanks for following the post. Indeed, WKT and spatial object transformation is very important, and in need of when working with spatial database. Also, as I mentioned before, FME can write spatial object directly into tde file a long time ago, but Alteryx does not support spatial object when files are writen to tde file for Tableau. I think one of the bottle neck is the spatial data format transformation functionality. I am not sure if my observation is correct, would be very helpful if the experts from Alteryx can share some thoughts. I would encourage you to post a new idea, and get more visibility 🙂

For the Polygon for Tableau tool, I think it was a not so good solution which was created in the old times when Tableau did not support spatial files connection. At that time, polygons are linked by points and path, but the problem is the polygon will be associated with various number of points depending on the shape.

I know it is possible to get something similar by copying the spatial object inside alteryx to text format, but it is not exactly WKT. Would you mind sharing some more information on how to convert spatial object to WKT?

I find by connecting to SQL Server, Alteryx SaptialObj can be translated to either Geometry or Geography object inside SQL server table. Then WKT or WKB can be generated from SQL server, by function .STAsText() or .STAsBinary(). Very straight forward.

The drawback of using a database is they normally have strict requirement for data quality, and I got different type of errors:

A .NET Framework error occurred during execution of user-edfined routine or aggregate "geometry".

The well-known binary (WKB) input is not valid;

Currently, there seems to be no options for viewing Spatial object as WKT or WKB. It will be good to see Alteryx Support both WKB and WKT in the future. A relavent post on WKB can be found here:

I upvote this idea. WKT is an open standard available in many different software systems. It would be a great help to us for cross-compatibility.

Just noticed that the second part of this idea has been implemented, ie. "output spatial object in TDE file directly".

Spatial Objects in Alteryx can be written directly into both TDE and Hyper, at least for Alteryx version 2020.2. (But I guess, it may have been implemented earlier, probably in 2018.2, looking at previous documentation.)

For Hyper file, apart from write, Alteryx can also read Tableau hyper file as a database, though the performance may not very good for large extract. (ref: https://help.alteryx.com/2020.2/DataSources/SupportedDataSources.htm ) 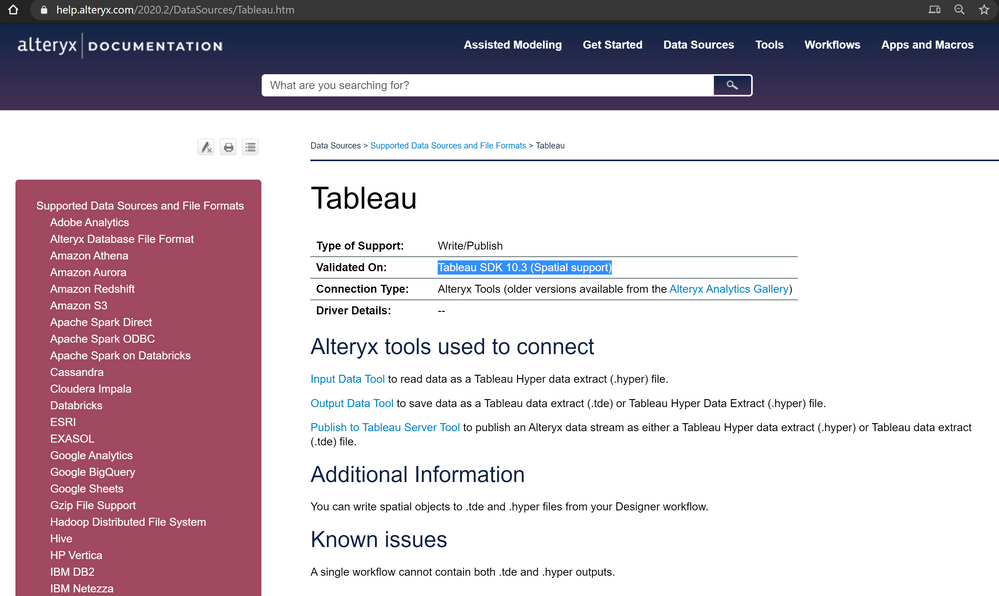 I suggest the above documentation also add information on Hyper API, which made Alteryx can talk to Tableau hyper file in two ways- both write and read. Also, may help to explain why a single workflow cannot contain both .tde and .hyper outputs.

Some spatial files (eg. polygons without closed rings etc.) may not be written to hyper/tde due to spatial data quality issue. Workaround could be, connect to Tableau directly, or use GIS tool/ spatial database to fix invalid geometries.