The desginer autosave feature is fantastic when you need it. However, it's pretty annoying when you don't need it as it seems like it:

Hopefully all of the above can be filtered out from Autosave:

The only workflow from the screenshot above that I'd want Autosaved would be the Parse Directory workflow as this is the only one which I made changes to:

- New Workflow2 - Completely blank (however, I had dragged a tool onto canvas and deleted it, so something had changed)

However, Alteryx brings up all of the workflows: 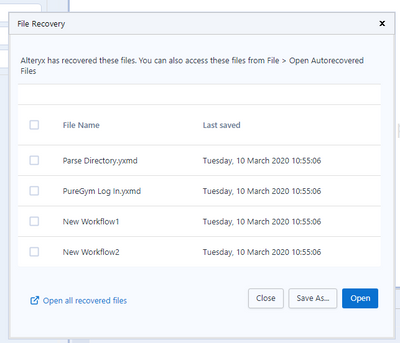 Thank you for your feedback! We're updating the autosave functionality to not include blank or saved workflows in an upcoming release! We'll update this idea again once the release containing this update is available for download.

Thank you for suggesting this! Starting in 20.2, auto-recover no longer shows blank workflows or workflows with no changes made to them. You can download 20.2 at http://downloads.alteryx.com/