There are many circumstances when you have to build an interative macro where it's not just the iterating data set that needs to change every iteration, but also a second data set.

The way that users work around this is to use a temporary yxdb file where instead of a macro input you input from the yxdb, and then write back to the same yxdb.    This allows you to pretend that you can adjust 2 different data sets on every cycle of the loop.    there are 4 downsides to this:
a) User complexity - this breaks the conceptual simplicity of macro inputs since now the users have to understand that in situation X I use macro inputs; and in situation Y I have to use some other type of tool.

b) Speed penalty - writing to disk is between 1000x slower and 1 000 000x slower than working with data in memory (especially if it's in cache) - so by forcing this to go through a yxdb file, you do incur a speed penalty which is just not needed

c) blocking penalty - Because of the fact that you can't write to a file that you're still reading from, you need to pepper this with Block until done tools - and you need to initialize the macro using a first write to the yxdb file outside the macro - which further hurts speed.    Given the nuanced behaviour of block-until-done, this also introduces user complexity issues

d) Self-contained - because you have to initialize these files outside the macro - the macro is no-longer self-contained and portable (which breaks the principle of Information Hiding which is a key pillar of good modular decoupled software design.

The other way that users work around this - is to serialize their entire second recordset into a field which then gets tacked onto the iterating data set using an iterative macro.   This is HIGHLY wasteful becuase then you have to build a serialize & deserialize process for this second recordset.    It fixes the speed and blocking penalites from above, but introduces a computational overhead which is generating no value; and makes this even more complex for users - and a further blocker to using macros.

We could make this simpler by allowing users to create multiple pairs of macro input / macro outputs so that 2 or 3 or n different data sets can be updated with every iteration.

Below is a screenshot demonstrating this, from an Advent of code challenge - the details of the problem are not important - the issue at hand is that there are 2 record sets which both need to be updated on every iteration. 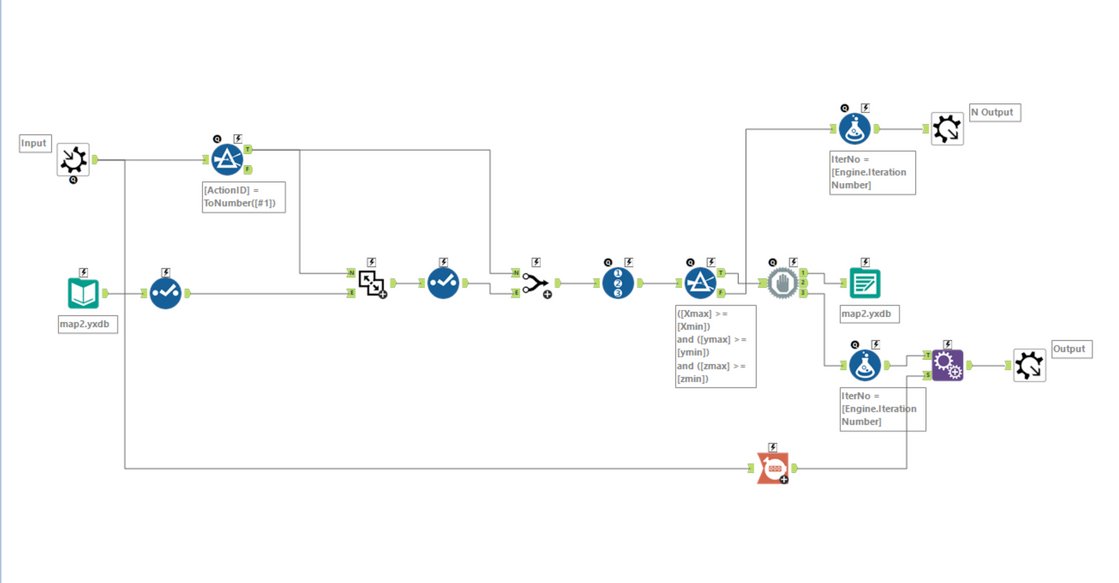 I have a whole talk about figure 8 macros which is about how to get around this too. I actually join all the data back together and use a filter to push it back around and then filter it back out.

@SeanAdams Agreed we need this, AoC drove it home for me this year.  I feel like this is mostly a UI/UX problem because let's be honest, the current UI for iterative macro setup is both hard to find and obtuse.  Refining the UI to specify multiple input/loop connections seems straightforward, I would have to look at the macro back end to see how difficult it is to implement in the engine(s).