Discussion thread for day 8 of the Advent of Code : https://adventofcode.com/2020/day/8

Part 1 is simple, but Part 2 is too slow to search the result.

Part 1 is an Iterative macro and Part 2 is a Batch macro.

Spoiler
After the getting the stars, I improved the workflow a little. 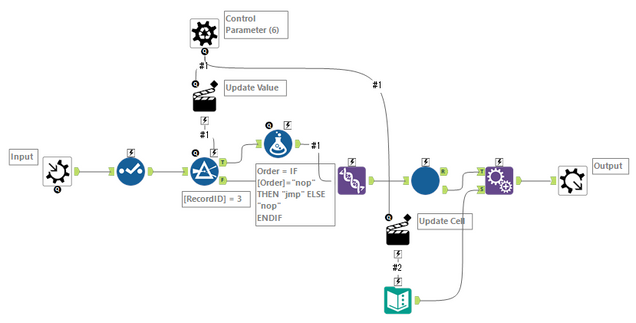 patrick_digan
16 - Nebula
Spoiler
Iterative for the first part and then just duplicated the data for the second part so that way it's pretty fast still (4.4 seconds for parts 1 and 2). Similar to intcode last year, I just stuff the input into a single long string with everything spaced appropriately so that I can get objects based on position. I was using a lot of macro outputs to debug... 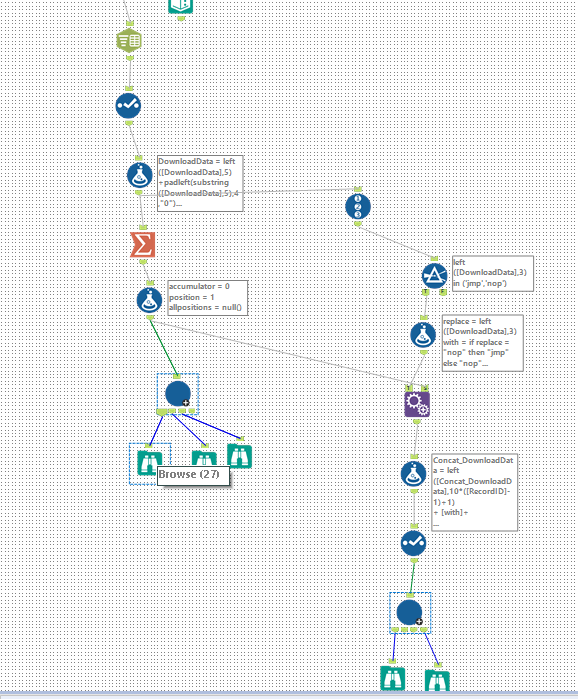 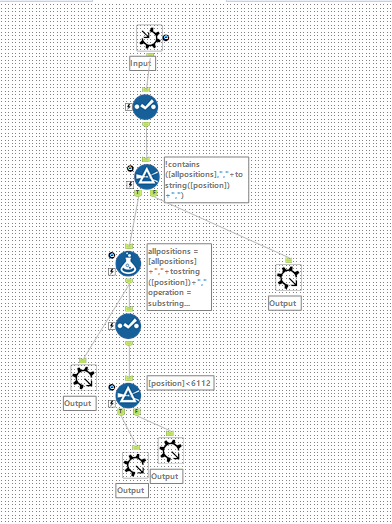 I was very happy that I managed to solve it without any macros!  They are such a pain to debug, if you can avoid them its always good.

@NedHarding you're a madman but those multi row formulas are excellent.

Part 2 was tough for me. I ended up rebuilding and simplifying my initial iterative macro in order to solve part 2.

Solved part 2 without needing to do it with a batch macro by generating the rows for each of the 300 versions of the model input that are needed.

Same concept for the iterative macro for both parts, just a small tweak on part B so it exits when a solution is found.

Macro for Part B with the break when total records < records in previous step i.e. a solution has been found.

Sorry, no head for part 2 today.

Just for fun, I can generate rows and then do most all of the work in 1 formula tool using the Alteryx Abacus (non-BaseA). It's pretty fast. 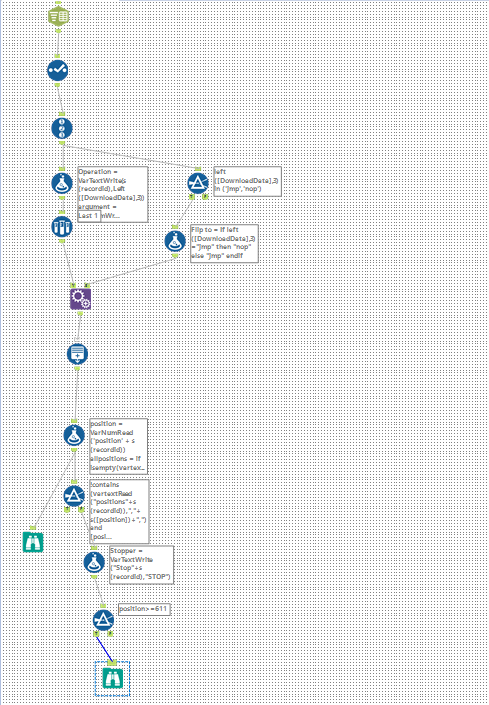 I DID IT!! I figured out how to do this one without macros!!!!! Now to be fair, I solved it the hard & painful iterative-macro-within-an-iterative-macro way last night when I was trying to get stars... but then I spent all night not sleeping thinking there had to be a better way, and lo and behold, IT WORKED.

Part 1 macro (which is also used in the Part 2 macro) - I'm not even sure at this point what it is doing, but has something to do with updating the value & the next instruction number for each iteration. And probably some extraneous inputs that are no longer needed... it was like 11:30pm by the time I finished, and I never want to see this thing again.

Part 2 macro, which will run the selected jmp/noc replacements through the Part 1 macro. Took about a half hour to run on my server - was shaping up to take 5 or 6 times that long on my laptop. I made it an iterative macro because it was slow and I wanted it to stop running the first time it ran into a scenario where it completed, rather than running ALL scenarios, potentially unnecessarily. I sort of hate this solution... but it worked, so there's that.

Second solution (Runs both parts in ~26 seconds + NO MACROS):

Spoiler
By combining the instructions into a single standardized pattern and then using a goofy but quite functional Substring+RegEx_Replace Multi-Row Formula, this ended up being extremely efficient and so much simpler to understand (and modify in future challenges, probably) than the macro-inception route above! I think I could make this work for running Part 1 & 2 at the same time with some tweaks to the post Multi-Row tool logic, a la Ned's approach that I see is sans macro as well - the Multi-Row formula tool is exactly the same for both parts, with the exception of grouping by Batch ID in Part 2.

Is BootCode the new Intcode? BRING IT ON.

Definitely not winning tool golf here. And I love @NicoleJohnson 's method of putting the row skipping and accumulator into one tool. For my brain, worked better in 2 multirows. Plus I added another multirow tool to see if codes repeated because I hated that the unique tool sorted the data and then I had to sort again to get back into order.

Credit goes to @patrick_digan 's method of concatenating and replacing pieces of code from last year. Worked like a charm.