Margot Gerritsen, Stanford professor and a founder of Women in Data Science, joins us for our debut episode. 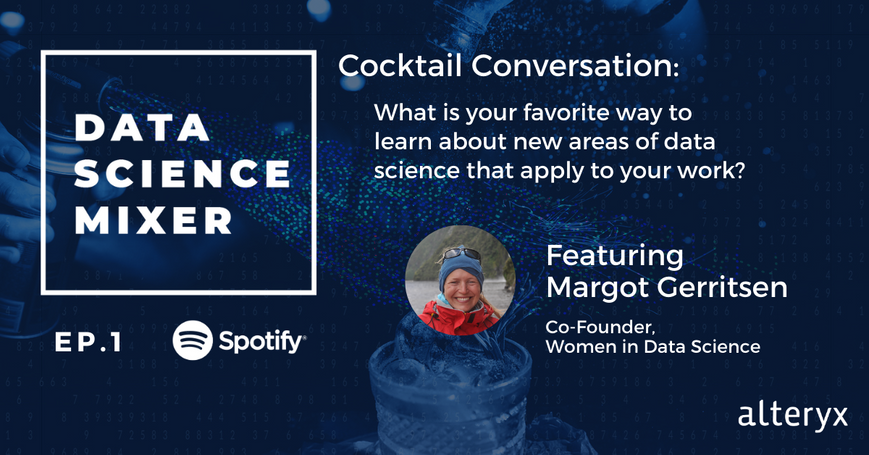 Join this episode's Cocktail Conversation by commenting below!

This episode of Data Science Mixer was produced by Susan Currie Sivek (@SusanCS) and Maddie Johannsen (@MaddieJ).
Special thanks to Ian Stonehouse for the theme music track, and Jenn Ho for our album artwork.

Great idea for a cocktail conversation - I'm always looking for new data science news outlets. Quanta Magazine is my go-to for great science journalism, including machine learning and AI. I also follow KD nuggets for more hands on tutorials and new libraries and stuff like that - a lot of it is re-posted from Medium but I think it's well-curated. What about you, @rafalolbert?

I love sharing resources! Right now I'm obsessed with the Stanford Social Innovation Review (SSIR). I even get to attend their Data on Purpose conference in Feb, to learn from researchers, policy makers, leaders of nonprofits and foundations; human-centered AI, civic tech, and How to Not Use Data Like a Racist, for a start.

@chriswilliams41 you've been in the "data for good" biz forever - where do you go to stay current with data science stuff?

@CristonS , that's a hard question because it's a plethora of different outlets. I come here to Alteryx Community because it's the best technical community out there, period. I learn so much from each of you on here. It's great. I just try to keep myself fresh with analytics use cases I see with my clients. Even if I see similar use cases, I try find multiple ways of solving those problems.

From an Alteryx standpoint, I just try to learn tools section by section and apply them with the Weekly Challenges. I combine that with staying on top dashboarding tools like Tableau, Power BI, and IBM Cognos. I always try to find ways to develop datasets in Alteryx and send those to other tools for additional reporting. This allows me to be a technician in those toolsets as well as instinctive because of the situations I was in to come to decide on those tools to execute the plan. It's an ongoing process. Familiarity with different work situations eases professional stress.

These are just my thoughts. 🙂

One of my go-to ways to learn new areas of data science (DS) is to watch my feeds on linkedin & twitter, as well as Google. Those will usually lead me to some very good articles about new topics and areas, which will lead me to investigate further. An example is when I saw an article come across my feed on linkedin regarding using AI to detect Cancer cells, and it being a significant improvement from a human looking at cells under a microscope.  Never thought about applying DS in that way, but it was fascinating to learn about how to train and tune the algos to detect the bad cells.

I guess just constantly being curious about new developments is my "favorite" way!

My favorite way to get up to speed is to purchase a great textbook and work through the exercises in the python tool in Alteryx.

Three that I have worked on are all from O'REILLY:

Each of these books approaches different topics in DS. This may be a time-consuming approach!  But I find that I learn best by doing - and evaluating results - and by debugging where I may not have entered code correctly!

Love this topic! As someone whose just starting to dig deeper into Data Science myself, the more recommendations on where to go to learn, the better.

@SydneyF a friend and colleague, who also happens to head up a team of Data Scientists here at Alteryx, recommended a few books to me when I posed a similar question to her several months ago:

(not exactly "new areas of data science", but hey -- for me, someone whose building a foundation -- these books have been AWESOME)

@mbarone -- Are there any recent articles or resources that stood out on your social feeds? Also, I don't know about anyone else, but it's been awhile since i've updated my content preferences on linked-in, I get a lot of nonsense -- do you subscribe to any specific topics, groups, companies that you'd recommend?

Hi  @LeahK !  Nothing specific that I subscribe to - lots of analytic/data science/AI info comes to my feed.  I'm guessing it's based on what I have listed as "skills" (LinkedIn).  And then once I started clicking on them and reading them the algorithms keep sending them to me.  Surprisingly I don't get too much junk.

Some resources from me:

My latest life-hack is that my org has access to O'Reilly, but the book format is not my favorite - not as quick, visual, and interactive as some other ones. Just recently I was pretty desperate to read this tile: https://www.packtpub.com/product/transformers-for-natural-language-processing/9781800565791, which is available on the O'Reilly platform, so here is what I did - I've installed Natural Reader Text To Speed in my Chrome browser and it reads the book aloud to me, it also highlights the sentences as the book progresses and gives me great quality audio in real-time, which I can tune for speed etc. I'm re-discovering books again and this is very exciting, maybe this content delivery trick could work for others as well!

#Excuse me, do you speak Alteryx?