Well, things are starting to cool off around here, and that means only one thing - droves of people eating and drinking pumpkin spice everything because it's not a million degrees outside any more. OK I lied, it actually means at least two things - the aforementioned annual pumpkin spice apocalypse AND your September Highlights and Release Blog! This month's edition is pretty cool, as you're going to be getting a peek behind the curtain to look at just how things work here in the Alteryx Community - so let's go!

This sprint was on the lighter side, with most of our updates being smaller quality of life changes or preliminary work on features you’ll be seeing in the future. Some highlights of these updates were a change to our red announcement banner that now allows us to specify where it’s being shown in greater detail, or the update to the ‘Was This Helpful’ UI on a knowledge base article’s tile. One of the biggest highlights is the update to our threaded forum UI! While we’re still looking into how and when we will roll this functionality out, we’ve included a picture of what this UI will look like on a discussion thread. 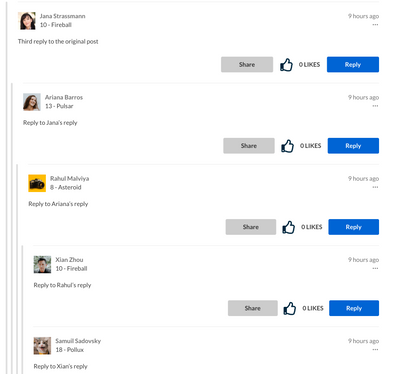 If you’re interested in what these other smaller updates were, you can always check out our version history article which outlines everything we’ve changed in the Community. It often includes items we can’t cover in this blog. However, some of you might be wonder what makes it into a release and why we pick certain items or have quieter releases periodically. So, I thought we could include some insight into how our sprints work.

Our community development team runs on a monthly sprint system. This means, with rare exceptions, we typically push new code at the end or beginning of a month. Our cycle commonly follows this format: requirement and scoping > development work > stakeholder approval, QA, bug fixes > push to production, with longer projects continuing development during the first and final stages to be pushed to production in the following month. Right now, we have a large project that is taking up most of our development resources, with our kind third-party vendors pickup up the smaller items and bug fixes we’re unable to do in our spare time. We’re excited to show you everything we can about this new project, but in the meantime, I’ve included a snapshot of what one of our sprints looks like in it’s early stages. 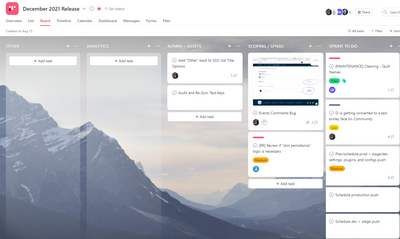 In case you somehow missed one of the big things happening recently in the Alteryx Community, we launched a brand new area! SparkED is a brand new space within the community specifically for educators, students, and career changers - it gives so many opportunities for people to engage with like-minded members that are doing the same things they are, all while increasing their knowledge in every capacity! But even if you don't consider yourself to fit into one of those categories, there's really something for everyone, including a brand new Job Board in the community. So if you have a new role opening up in your organization, go share it there! You're bound to find some people that probably know what they're doing.

I'm also going to point out another post from our own @lmisenhimer_CSR this month - Social impact and business growth belong together. In sharing these webinars, there are some fantastic opportunities to drive conversation among you, our community members, around how the organizations that you're a part of make social issues a part of their mission. This edition's question has to do with just that and asks how your company integrates social impact into the core purposes of your business. Check it out and weigh in with your opinions!

We've also had a few great posts brought to us by none other than @Emil_Kos - Creating internal Alteryx centre of excellence goes into what tools would be useful for creating an internal space for a company's Alteryx users to get information (other than community, that is). The second - Alteryx Second Polish user group recap - Alteryx Community Birthday gives a great recap of the Polish User Group meeting that was held (complete with champagne and balloons!).

And that gives an absolutely perfect lead-in to one other thing that you might have missed in September - The Alteryx Community turned 6 years old! We're basically adults now, Mom, and don't you forget it. In case you didn't see it, we have a birthday blog up that goes into some of the amazing contributions that you all have made to the community, as well as some major milestones that we've hit in the past year Definitely give it a read, even if it's just to see the snazzy infographic to get an idea of the great things we all accomplish when we work together as a community!

Our blogs had plenty of new posts to keep you busy in September. Some posts went deep on cool projects, including how to experiment with APIs, tinker with video transcripts, investigate images and apply topic modeling to text (stay tuned for part 4)! We also dove into digital transformation in finance and banking in another series of posts. And for a glimpse inside Alteryx life, we followed along with a day in the life of one of our own customer support engineers, from rolling out of bed to savoring a well-earned happy hour.

On the podcast front this month, we had an interesting debate focused on if analytics in sports adds to or takes away from the “magic” of human athleticism, and how satellite imagery and data science are used to study wildlife in Antarctica. We were also reminded of how important it is to enable underrepresented groups in STEM fields, and learned about how data literacy can act as a key skill for online community success.

Alright everyone, now that we've gone through all of that, it's just about time to wrap things up around here. Get out there to watch the leaves change, drink some pumpkin beer, eat a pumpkin scone, carve a pumpkin, go to a pumpkin patch, light a pumpkin scented candle, basically just add a pumpkin into any activity that you would like and it'll be a great fall activity that is somehow more seasonally appropriate than it was before! Seriously, though, enjoy the season and don't forget to really jump into the Alteryx Community now that the kids are back in school! You finally have time to ask all of the pressing questions you had but were probably way too busy this summer so now is the perfect time. 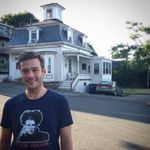