Formula 1 and McLaren Racing are ready to party in Brazil! Brazilians have a passion for racing unlike any other country. They have a wonderful history of exceptional drivers like Fittipaldi and Senna.

Ayrton Senna is a national treasure in Brazil and is arguably the best driver in Formula 1 history. Ayrton was the youngest driver to win triple world championships. He also dominated Monaco during his time, having the most consecutive wins and the most wins at the track that is typically considered the most difficult track on the calendar.

Unfortunately, Ayrton was killed during a race in Italy in 1994. Ayrton was one of the reasons why I became fanatical about the sport. The Brazilian fans honor Ayrton every year by packing the grandstands and creating a festival-like atmosphere. 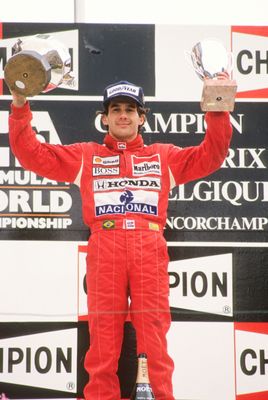 Brazil is a great event to introduce the Formula 1 fan base. Formula 1 fans are considered some of the most passionate fans in sports. I’m one of those fans, and my passion for the sport hopefully comes out in these blogs.

There really is something for everyone in this sport. The technology alone can keep a fan busy for the entire year, then the technology changes the next year. The drama among the teams and the drivers creates a palpable experience. The teams and drivers all seem to have love-hate relationships. The competition is extremely high in a very expensive and dangerous sport. All of these elements create an atmosphere in which anything can happen, and everyone can find something within the sport that interests them.

I don’t have the numbers, but the success of Formula 1: Drive to Survive on Netflix has had a major impact on the sport. I have seen many interviews of drivers on popular interview programs where the interviewer says something to the effect of, “I didn’t know about Formula 1, but after watching Drive to Survive, I’m hooked.” 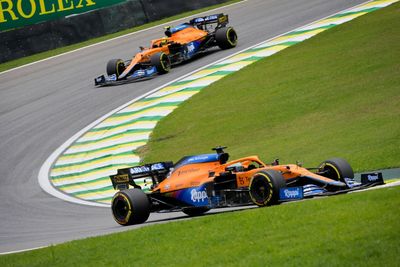 Just like any other sports team, the fans help make the wonderful experience at each venue. McLaren understands how important the fans are to the sport and to the McLaren Formula 1 team brand. McLaren is known for how connected they are to the fans and how open the team can be, especially with their drivers.

McLaren has a superb driver line-up in Daniel and Lando! There probably aren't two other drivers on the grid who have as much charisma and charm as those two. You can check out “Unboxed” on YouTube and see all the fun videos with Daniel and Lando. Watch the race and see McLaren commercials, and of course, check out their social media posts. These pieces, similar to other businesses, are important to the success of the brand.

Just like McLaren, Alteryx has their fanatical fans as well. Doing data analysis to understand our fans and know where they are is important to both Alteryx and McLaren. For Formula 1, locating fans around the world can be difficult. This is another area where Alteryx is helping McLaren get ahead of the competition. McLaren takes advantage of geospatial capabilities in Alteryx to identify where the fans are located. The team then works with their lifestyle partners to create engagement opportunities to get McLaren closer to their fans.

“It is meaningful to be able to innovate and bring our fans closer to the sport, especially in the wake of a global pandemic.”

I’m jealous of all the fun everyone will have at the track in Brazil and know that the McLaren fans will be going wild for the team!

This track has been around for quite a while. It’s another World War II era track where there are many banked corners. This track also has a lot of elevation changes and, in my opinion, many blind apexes that drivers have to deal with. Sector 2 is where a lot of this occurs and can be a tough test for the drivers to pass. I think one of the interesting parts of this track is that the first turn is downhill, but then the last turn is uphill. The start/finish line is basically on top of a hill with the rest of the track cascading down below. This weekend is another Sprint race for the start of the race. McLaren has done well in the sprint race so far, so fingers crossed they do it again.

Check out this virtual lap of São Paulo.

McLaren Racing just couldn’t catch a break this weekend. The start of the race looked promising as Lando Norris started fifth and got a great jump off the line. Just before reaching turn one, he was about to pass the Ferrari and the two cars touched, puncturing Lando’s left rear tyre. Lando then had to limp his way back to the pits for a new set of tyres. With yellow flags waving for the next few laps, Lando was able to catch back up and begin to pass his competitors. This first lap incident took Lando out of the tyre game plan as he was off cycle for new tyres. In the beginning this actually helped him move his way through the field as other competitors tyres started to go off. Eventually though Lando was unable to continue to move his way up the field and finished 10th.

Daniel Ricciardo had a different type of race from Lando. Starting 10th, Daniel had a day of moving back and forth from that 10th position making his way all the way to 5th at one point. Daniel seemed poised to be able to catch the Ferrari’s for the end of the race. Unfortunately, Daniel’s car had a power unit issue about three quarters of the way through the race. McLaren decided to retire the car to avoid any other major issues.

With the races left McLaren will continue to push Ferrari to the end to grab third place in the constructors championship. 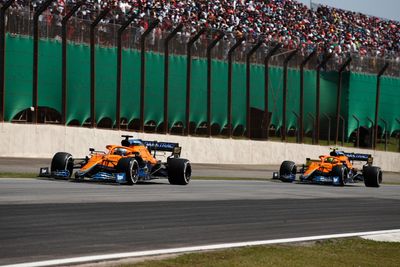