An Overview of Stepwise Regression

Regressions are models that assess relationships between variables. Multiple regressions assess the potential power of multiple predictor variables (e.g. ball possession, corner kicks, pass completion) on a given dependent variable (e.g. goals in a soccer match, or whether the team will win or lose).

It can be tempting to add and add and add predictor variables to a linear or logistic regression in the spirit of trying to get a well-fitting model - what could go wrong?!

Well, if the predictor variables have not had their statistical significance or collinearity evaluated, there is a risk the model is going to be overfitted, confused by the complexity of so many variables, or suffer unnatural inflation of at least one estimated regression coefficient.

Enter stepwise regression. Stepwise regression helps select features (i.e. predictor variables) that optimize a regression model, while applying a penalty for including variables that cause undue model complexity.  In Alteryx Designer, the Stepwise tool can be used for this process.

Much like relative X, adding features/predictor variables to your model “just in case” can backfire on productivity or utility. The new variable can be irrelevant to the task or not super helpful (relative X is just in the kitchen to “see what’s up”), given that there is already another predictor variable pulling enough weight for the rest of them; i.e. they are redundant. “I want to feel useful, what can I do? Can I help you chop this last carrot?” They add confusion without adding much value.

According to Occam’s Razor, when there are multiple competing hypotheses (or models), the one that makes fewer assumptions will typically be the one that is selected.

What is one way we know if our R-squared is being faithful to the actual strength of the predictor variables in a regression, and not getting inflated due to a lot of added independent variables that do not produce value? 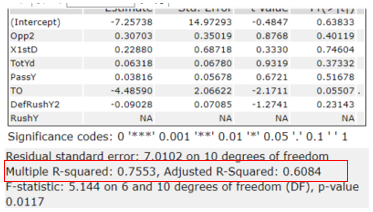 A logistic regression has a line more akin to an “S” because it is a sigmoid function.  Therefore, an ordinary least squares test and trend line will not fit that “S” shaped curve.  There are multiple different pseudo R-squareds: there is Cox & Snell, McFadden, and McKelvey & Zavoina, just to name a few. McFadden R-squared (which also ranges 0 to 1) is the most common for logistic regressions because it works well with nested models.

Although Alteryx uses a non-adjusted McFadden R-squared in its report for logistic regression, you will notice that it does provide the penalty criteria on the same line, which can be used as an indicator for unnecessary model complexity - keep reading to find out how!

Voila! Now we know why our report says “McFadden” when you use logistic regressions in Alteryx.

The Stepwise tool takes two inputs: one is the model object coming out of your regression model and one is the raw (or pre-model) data.  The Stepwise tool looks at the regression model with your selected variables, and looks at the data before it got to your regression.  The output will help give perspective on which independent variables should be selected, and which can potentially be removed.

You will notice that the Stepwise tool input anchors are not labelled with indicators (e.g. O or D); it does not matter which anchor takes the model object and which takes the data. The R engine will recognize the model coming in from the O output of the prior regression as an R model object. Fun fact: Model objects are also part of the process for Alteryx Promote.

Stepping in the Right Direction 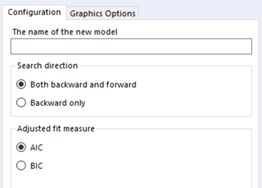 What are some examples in which a predictor variable might be removed from the regression?  If it has no statistical significance to the target variable, or if it is collinear with another variable.

The Stepwise tool starts with the full set of variables and removes them one by one (starting with the least statistically significant) until the adjusted fit of the model cannot be improved anymore.  The variable that is removed does not have an opportunity to be re-considered for being added back in as the Stepwise tool moves through this process.

The Stepwise tool removes variables one by one, but it will also test adding back variables that were previously removed. Why? There might have been a variable that was initially removed but re-adding it with a different combination of predictor variables yields a more optimal model.

Remember that both backward elimination and forward selection are assessing the variables that you had in your model leading into the Stepwise tool, not all the potential variables in the data set.

Bayesian Information Criterion (BIC) or Akaike Information Criterion (AIC) are two criteria for model selection.  The BIC applies a larger penalty for model complexity than the AIC.  The AIC does not take into consideration the number of records per independent variable in the model; i.e. the BIC takes the sample size of the data into account. Whether you select the BIC or AIC, generally a lower score is better. Fewer penalties = a better fitting model.

Looking at our outcomes of the Stepwise tool we have several points of information to look at.  Below are some areas that are useful to get started with: 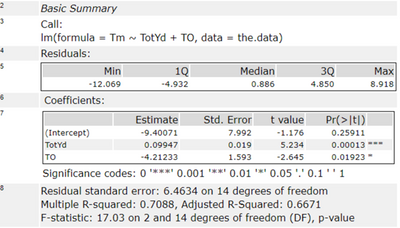 Want to use data investigation techniques to try and select some strong predictor variables upfront instead of or in tandem with using a Stepwise? Of course you do!  No problem. One method is to use the Association Analysis tool to identify the association measure and find the corresponding p-values.  The association measure is the method that is going to explain the strength of association between two variables, as well as potential covariance, and whether they are positively correlated (if one goes up, so does the other) or negatively associated (if one goes up, the other goes down).  This is a useful way to see if a predictor variable has a strong association with the target variable.  This is also useful in identifying if multiple predictor variables have a high correlation to each other; this indicates there is collinearity between them.  The Association Analysis tool also has an interactive chart with an interactive thematic grid and scatter plot to visualize association.

Step Toward the Future