In our third post we learned about induction algorithms, the machinery within an analytical model that one uses to calculate a prediction (or, during model development, a retrodiction).  We discussed “estimating” the values of an induction algorithm’s parameters to fit a given dataset, but we didn’t dwell on what that means.

To discuss fitting (and other subjects, later) intelligently, we need to define some terms.  Stay with me for a few paragraphs.  No way around this stuff!

Recall that a model’s generating process is an empirical process that produces data.  The data is a collection of data points.  Each data point is a vector of values for a fixed set of variables (including the model’s dependent variable), with one value for each input variable.

The set of theoretically possible data points is the model’s sample space.  A point in the sample space is termed an outcome.  (Thus in data science an outcome is a possible, not actual, data point.)  An event is a set of outcomes.  An event occurs when one of the outcomes it contains is realized as a data point.

There are many ways to gather a sample systematically.  We won’t go over them today.  For now just know that it’s not enough to say, for example, that we want to collect a “random sample.” 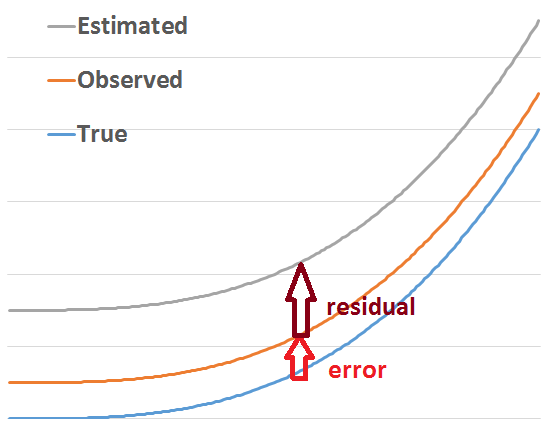 Enough with the dictionary, and back to fitting induction algorithms!

The essence of fitting an induction algorithm to a dataset is choosing values for the algorithm’s parameters to minimize some function of the resulting residuals over the entire data population.  In practice most models pursue this goal by balancing two other goals:

Notice that the second goal does not refer to the test set.  We’ll return to this point.

A fitness function (also termed a loss or cost function) is a real-valued function that combines the two functions above.  Let’s call them the underfitting penalty function and the overfitting penalty function.  A model fits an induction algorithm to a sample by searching the space of possible induction-algorithm parameter values, to find a vector of parameter values that minimizes the value of the fitness function.  (The search algorithm is the model’s fitting algorithm, which we’ll discuss next time.)  Thus a model’s fitness function expresses the model’s approach to the underfitting/overfitting tradeoff.

Fitting the Data We Have

By far the most popular underfitting penalty function is ordinary least squares (OLS), sometimes termed the L2 penalty.  It is the sum of the squared residuals (taken over the training set when fitting an induction algorithm, or over the test test when testing the algorithm).  A common alternative is least absolute deviations (LAD), the sum of the residuals’ absolute values, or the L1 penalty.  Each has advantages.  There are many others.  Knowing what they are, what their advantages are, and what model types use them helps us apply good judgment in choosing a model type.  (Later we’ll also learn about model-quality metrics we can use to compare model quality across model types having different fitness functions.)

Let’s cook up a trivial example, to illustrate.  Our training dataset is n = 10 data points from the EMR dataset we’ve used in previous examples.  We use the Linear Regression tool to fit an OLS model for the R formula pbf ~ gender + height_inches + age + weight_lbs.

(For now we’ll forego wrapping this script in Alteryx’s R tool.  But it’s easy to do so!)

All but the weight_lbs coefficients are substantially different.  Table 2 below compares the two models’ estimates, pointwise penalties, and overall penalties (fitness-function values):

Table 2:  Comparison of OLS and LAD Residuals and Penalties

It’s interesting to observe that the LAD model fits five of the data points perfectly.  On the other hand, its worst-case residual is 4.03, compared to 2.34 for the OLS model.

Fitting the Data We Don’t Have

An induction algorithm that overfits its training data has a low underfitting penalty value for the training data, but a high underfitting penalty value for the rest of the data population (including the test set).  The fitting process has overemphasized consistency with the training data at the expense of consistency elsewhere.  It would be nice if we could somehow directly measure or estimate the undefitting penalty’s value on data outside the training set.  That’s what the test set is for.  But once we’ve testing the fitted induction algorithm, it’s too late to change the algorithm’s parameter values.  We need some way to penalize overfitting while fitting (training) the algorithm, so it also fits the test set and out-of-sample data well.

Unfortunately, there is no fully general concept of model complexity.  In fact, many regularization penalties include an arbitrary parameter (a coefficient or bound) that must be chosen judgmentally.  This fact highlights the degree to which a model’s concept of fitness is a subjective, judgmental decision.  Happily there are widely accepted techniques to guide us in setting these parameters’ values.

Other examples of model complexity include the depth and number of nodes in a decision-tree model, the number of trees in a random-forest model, the number of terms and size of the exponents in a polynomial function, and statistical learning theory’s VC dimension.  The important thing for now is to recognize that different model types may include different notions of model complexity, or different penalties on the same concept of model complexity, even for the same type of induction algorithm.  We implicitly choose among these when we choose a model type.  This makes it important to learn about the practical consequences of specific types of fitness functions.  Many of the data-science design patterns we’ll encounter relate a specific fitness function to a class of modeling problems.