Honda Motor Co., Ltd., which Mr. Soichiro Honda started up in 1946, manufactures and sells motorcycles, automobiles, and power products. Honda's three main business pillars are "2-wheeled vehicles," "4-wheeled vehicles," and "power products." However, the company wishes to evolve by leveraging the strengths of these existing businesses' technological capabilities, manufacturing capabilities, and global market platforms to build new strengths in creating solutions that include new experiences. Aiming to create the fourth pillar, Honda is actively developing R&D in the fields of energy, AI, and robotics. Learn in this use case how Honda used Alteryx to build comprehensive insights using spatial data.

Since 1998, Honda has provided "Internavi" (the equivalent service in the U.S. is known as “HondaLink” or “AcuraLink”), a telematics service that offers real-time traffic, safety, security, and environment information to an on-vehicle navigation system as well as a mobile phone. Honda was the pioneer of collecting driving information from vehicles equipped with Internavi and distributing knowledge obtained from them as traffic information.

Mr. Yoshiaki Sugimoto, Strategy Planning Department - Business Development Division, said "similar services are currently being offered by other companies, but Honda's Internavi is available in all models, from Kei cars and A-segment cars to luxury cars. Furthermore, these vehicles are also equipped with ‘Link up Free’ – a free-of-charge communication system. The data is collected from all over the country after processing it into statistics, so as not to identify any individual, and we believe that this accumulated information is very useful."

For example, at the time of the 3.11 Great East Japan Earthquake in 2011, traffic condition information was shared on Google Maps and the other websites, which became known as "Historical traffic information." This information was later put to use during the Kumamoto earthquake in 2016 and other natural disasters. Other examples include analyzing transitions such as traffic patterns with frequent sudden braking. This information can be used by local governments and police for alerting or city planning. The data can also be used to analyze tourist areas and determine where tourists are traveling, as well as serve as a guide to help determine the most efficient means of travel.

Traditionally, Internavi collected data when Honda owners drove their cars, and returned it to the driver with valuable insights. Honda’s next goal as a business is to return these insights to the public and enable people all over the world to improve their daily lives as described in Honda 2030 Vision.

In providing an information service that utilizes big data, Honda had a problem of how to extract and analyze the data accumulated from Internavi. A huge amount of data is stored in the data lake accumulated in the cloud. Mr. Sugimoto and his team were originally expanding the use of Amazon Web Services (AWS), and were planning to build the foundation of data analysis with AWS.

Therefore, Honda chose to partner with Classmethod to build out an environment. Classmethod decided to create a small elite team that could meet Honda’s operational needs. The deciding factor was being able to choose a partner who can provide services and know-how currently not available in Japan.

In general, Honda’s process copies data from the existing data lake to Amazon S3, analyzes and shapes the data with Alteryx, and visualizes it with a BI tool. Initially, Amazon EMR was adopted for data processing on S3, but replacing it with AWS Athena was the new proposal. Once the data is imported, Honda uses Alteryx to prepare and blend, and then uses Tableau to visualize insights. 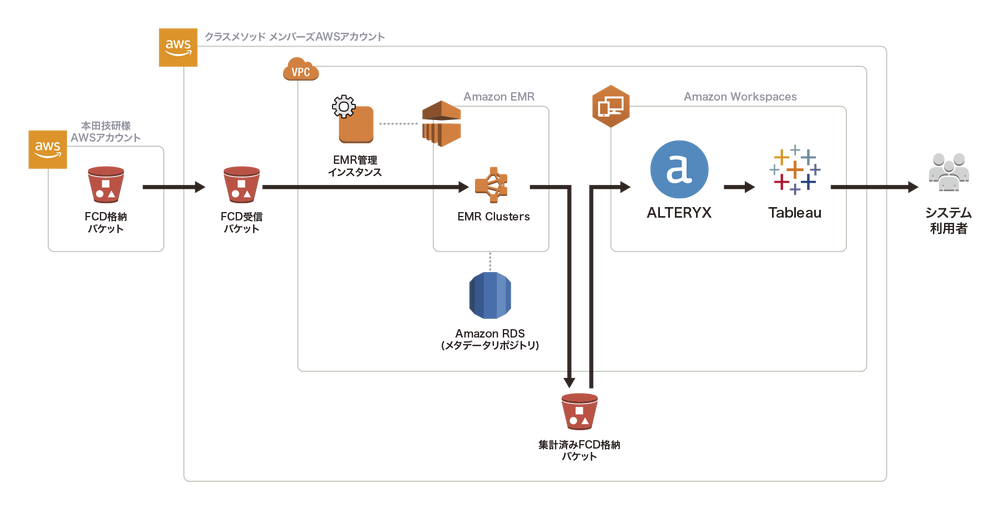 The data is based on location information. Alteryx has tools that can handle spatial analysis, such as the Create Points tool, and it perfectly fits the needs of Mr. Sugimoto. "I'm originally specialized in mechanical design such as racing cars and, therefore, my analytics and programming skills were rather weak, but with Alteryx I can execute my analyzing ideas because the functions are represented by icons and can be handled intuitively. It is also easy to understand and deal with error messages. It is fun to manipulate data with Alteryx,” said Mr. Sugimoto. When AWS Athena became available in Japan in June 2017, Honda and Classmethod began updating the foundation and replaced it with the existing EMR.

Describe the benefits you have achieved
"We believe that our data will be useful for a variety of things such as avoiding traffic jams, road construction planning, planning of new tourism events, etc. The more Hondas are on the road, the more useful it becomes for the people. I would like to create a world that makes people happy," Mr. Sugimoto said. In addition, he said that he would like to actively utilize new services, functions and technologies, and would like to evolve Honda's information service.

Honda said that Alteryx helped them to provide telematics data accumulated over the years as useful information to the world, while creating a new income stream for Honda. In addition, Alteryx lowered the technical hurdles of data analysis for them. Business and data science issues can be solved at once by one person. There is no need to have several data scientists which makes the process more agile.
Related Resources

An amazing use case and for Alteryx with AWS at scale