A hyperparameter is a model parameter (i.e., component) that defines a part of the machine learning model’s architecture, and influences the values of other parameters (e.g., coefficients or weights). Hyperparameters are set before training the model, where parameters are learned for the model during training.

Hyperparameter tuning is an art… possibly a dark art. 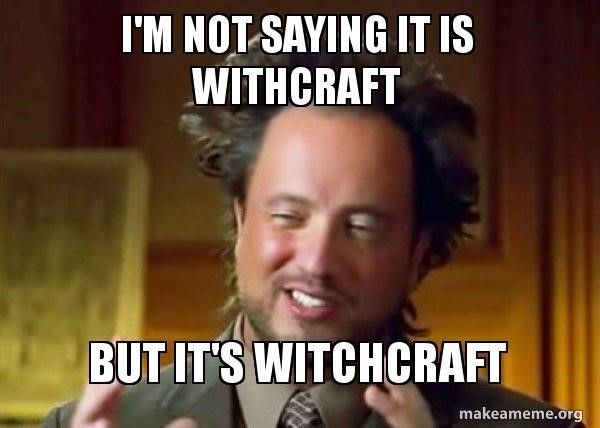 I love this meme

What Exactly are Hyperparameters and Why do They Matter?

Taking a step back to think about all the inputs that go into creating a trained machine learning model, there are three broad categories; training data, parameters, and hyperparameters.

Training (input) data is the dataset that you use to train a model. The training data is what the algorithm leverages (think: instructions to build a model) to identify patterns within the data and exploit the patterns to make predictions. The training data (typically) do not become a part of your model directly; they are just used to teach your model what the data look like, and how to handle the data to make meaningful estimates of the target variable.

The third component of a trained model, hyperparameters, are variables that regulate the process of training a model. Hyperparameters typically determine when the model is done being trained, or how many records an algorithm considers at a time during training, among other things.

Because hyperparameters define the actual structure of a machine learning algorithm and the process of model training, there is not a way to “learn” these values using a loss function and training data. You can think of hyperparameters as the knobs and levers you turn and pull to make the algorithm return the clearest signal possible within the trained model.

Hyperparameter optimization is usually accomplished by some automated variation of the good old “guess and check” method (called manual search or hand-tuning in the world of hyperparameter tuning when done by a human).

Hand-tuning (guess and check) entails running multiple trials of training your model, where each trial has different hyperparameter values (but the same training data – as with any good experiment, let’s try to minimize the independent variables here 😉). Each “trial” is then evaluated by a specified hyperparameter metric (specified by you). Accuracy calculated with a holdout dataset is a common metric used for hyperparameter tuning. Popular automated versions of guess and check are called grid search and random search.

Grid search involves specifying a list of possible hyperparameter values you’d like to test, and then the algorithm will train models with every possible combination of the provided hyperparameter values and assess the performance of each trained model using a specified metric (e.g., the accuracy of predictions on a test data set).

Let's imagine we are developing a Decision Tree model. We are interested in tuning two hyperparameter values; the minimum number of records needed to allow for a split, and the maximum allowed depth of any node in the final tree.

The minimum number of records needed to allow for a split hyperparameter sets a minimum number of records in the training data that need to end up in a node in order for that node to be split further, and the maximum allowed depth of any node in the final tree limits how many layers of splits the decision tree can have. Both of these hyperparameters can be used to mitigate the model overfitting the data, and they limit the number of splits that can be made in the dataset. For more detail on the hyperparameters for decision trees in Alteryx, please see the Decision Tree tool mastery.

As you can probably imagine, this can get out of control pretty quickly. In our example, we are only tuning two hyperparameters with three values each, but a total of nine different models will be trained to find the best pair of values. Although hyperparameter tuning is easy to parallelize (or, known as an embarrassingly parallel problem in computer science parlance), it is still a time-consuming process without a guarantee of finding the best possible values.

Another issue with grid search is that it is testing incremental values - so if the best possible value for the minimum number of records is actually 25, grid search will never find it unless it is specifically specified.

Random search works a little differently. Instead of giving a list of hyperparameter values for the optimization algorithm to test, you'll provide statistical distributions of hyperparameter values that you'd like the optimization algorithm to test values from. So, for our decision tree example we might provide a normal distribution for the minimum number of records with a mean of 20 and a standard deviation of 5, and a uniform distribution ranging from 1 to 6 for the maximum node depth. 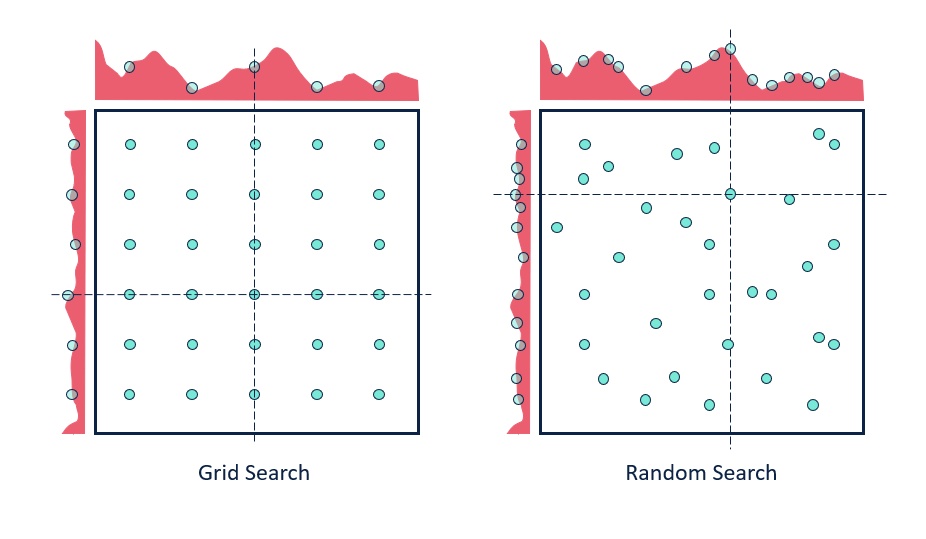 Adapted from Bergstra and Bengio 2012

Entire companies have been built around hyperparameter tuning - this is a non-trivial task. Finding the optimal hyperparameter values for your model can improve performance, but there is a cost (e.g., time, effort, money, sanity) to return ratio that should be considered before diving into the more complex approaches for hyperparameter turning. For the best possible success with more simple hyperparameter tuning methods, my recommendation is to follow the maxim "Don't Be a Hero".

Ultimately, you will need to pick a starting point for your hyperparameters, and in selecting In the same way that a hypothesis isn’t really a blind guess (it’s a well-informed guess) the initial values of your hyperparameters should be grounded in something. Hopefully, you did a literature review before getting involved with your machine learning project, and hopefully, in that literature review, you came across some relevant to your work. It is best practices to start with the hyperparameter values used is use cases similar to yours, and expand your search space based on that. The methods used for searching (manual, grid, random, or something fancy, as well as whether to use a validation dataset or cross-validation for evaluation) will be determined by the assumptions you're making for your model and the time and resources you have for the task.

Scikit Learn's documentation on tuning the hyper-parameters of an estimator details the available hyper-parameter tuning techniques in the Python package, as well as suggestions for using them.

If you'd like more details on Bayesian optimization for hyperparameter tuning, this article does a nice job describing the intuition.

Hi Sydney - I found this to be an incredibly useful introduction to hyperparameter tuning!

I was curious, though, how best to implement this within the Alteryx toolset. Is it possible to perform, for example, a grid search on the hyperparameters of an Alteryx predictive model, or would you need to use specifically the Python tool to call GridSearchCV on a sklearn model?

Thanks for the great question!