Integration Consulting is an international strategy, management and operations consultancy that routinely uses Alteryx for daily tasks inside client projects as well as to perform advanced analytics, such as machine-learning and geospatial analyses. Integration Consulting employed Alteryx to support a client that sought to understand how teachers and classrooms allocation in state-funded middle and high schools could be optimized to allow the implementation of a new education model. Using a customized iterative modeling process through Alteryx, Integration supported the client in a pilot analysis that identified that an average of 5-7 percent of teachers and 4-6 percent of classrooms could be optimized.

Beginning in 2015, a Brazilian client began working with local representatives in a selected Brazilian state to propose and implement an innovative model of education for middle- and high-school students ages 11-17. For example, one study from the Brazilian state where the Alteryx analysis was performed showed that students in the proposed model scored up to 40 percent higher on standardized tests compared to those in regular schools.

The implementation of this model requires an increase on the number of classrooms and teachers. Prior to requiring a large government investment to support this change, the first step of the project was to increase the current efficiency of the state-funded education system.

The objective of using Alteryx in this context was to find specific opportunities to free up resources. However, this posed an intricate analytics problem—the allocation of classes and teachers is complex, with multiple specific restrictions surrounding class sizes (both physical and student-to-teacher ratio), working hours, distance between schools, subjects of teacher expertise and so forth. Thus, it became impractical to translate these variables into a linear, equation-based programming model. Instead, Integration Consulting chose to create a customized, depth-first search algorithm to identify a viable average among many scenarios and factors.

Integration Consulting worked alongside the client and state representatives to identify and organize the data that should be factored into the model. For the solution itself, Alteryx Designer was leveraged to include several advanced features, including Spatial Data Analysis, Batch Macros and Iterative Macros.

The spatial tools were used to define the possible movements of students to optimize classrooms as well as the allocation of teachers that could lecture in up to two schools inside a specific radius. The resource allotment was done using Iterative Macro, considering that each allocation (school/class/subject) output resulted in a change to the resource availability for the subsequent school/class/subject. Iterative Macro was also used to test and select the best possible combination of teachers from surrounding schools.

The eventual workflow that was created from these tools held the capability to assign students to classes and classrooms, generate the demand of teachers per subject and allocate actual professionals according to the restrictions above. The final output of the analysis was a detailed allocation list of students and teachers across the complete middle- and high-school network for the pilot Brazilian state, encompassing more than 500,000 students, 23,000 teachers and 15,000 classes.

With the baseline result of the analyses validated, the client additionally needed to determine the impact of the most important variables on the optimization—for example, the maximum distance that could be allowed between schools or if a high school teacher could be allocated to teach in a middle school. In this way, Alteryx enabled Integration Consulting to generate modified workflows rapidly, calculating the results for more than 50 different scenarios with multiple variations in boundaries. 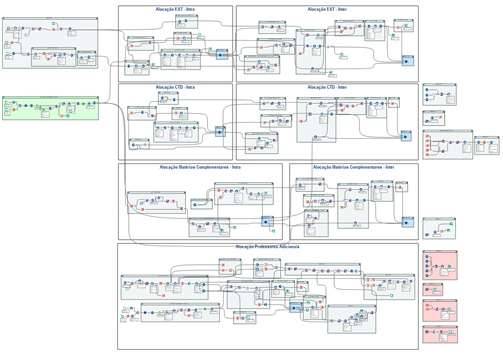 Iterative Macro Allocation for Teachers at a Second School

For the selected Brazilian state, the customized Alteryx workflows discovered a solid average of 4-6 percent of classrooms and 5-7 percent of teachers that could be optimized to be allocated on the new model. In addition to establishing a repeatable analysis that is planned for use in two more Brazilian states, the workflow described above has helped the client create an implementation plan that identifies which schools in the first pilot state are best suited to transition to the new learning model. This process is now underway, and the client estimates it will go live at the start of the 2020 school year.