The Periodic Table of Alteryx tools

If you went to Inspire 2017 you probably picked up The Periodic Table of Alteryx tools, but only 100 of you were able to take home a laminated one. One of our ACEs, @Ken_Black, even got his autographed! That was a first for me. And then @Joe_Mako had me autograph my Icons of Alteryx Community card. You guys sure know how to make a girl feel special.

Back to the table. This is something I have wanted to do for a really long time and have even considered it for the last 5 or so Inspires. I had a conversation with my friend, @NeilR, who mentioned that he was classifying the predictive tools into a cheat sheet to better understand when and why you use them. He had a technology track speaking slot at this Inspire and I thought, not only would this content make a great side B, I finally had outside pressure to do this project and get it done for the conference.

Even in this year’s planning, it got pushed to the back burner as the number of assets I had already committed to (and even more I hadn’t) started piling up. I decided if I was going to do it, Memorial Day Weekend was going to be the time.

Ordering tools in the table

How should the Alteryx tools be ordered? The standard periodic table (of elements) is a tabular arrangement of the chemical elements, ordered by their atomic number (number of protons). Of course Alteryx tools do not have protons. When I would discuss the periodic table with others, the first thing they would say was ‘oh, are you going to put them in their tool categories?’ This confused me, because they are already separated into tool categories in the product and in the Help documentation. Tool category is prevalent in the icon itself, so it seemed redundant to me to call it out in the table. I thought tool usage was a far more interesting way to lay them out, so I started there.

I got the tool count data from @BenG and I joined it to the DefaultSettings.xml file and the Macros directory that installs with Alteryx. Once I had the list of tools and their counts, I needed to decide the classifications. 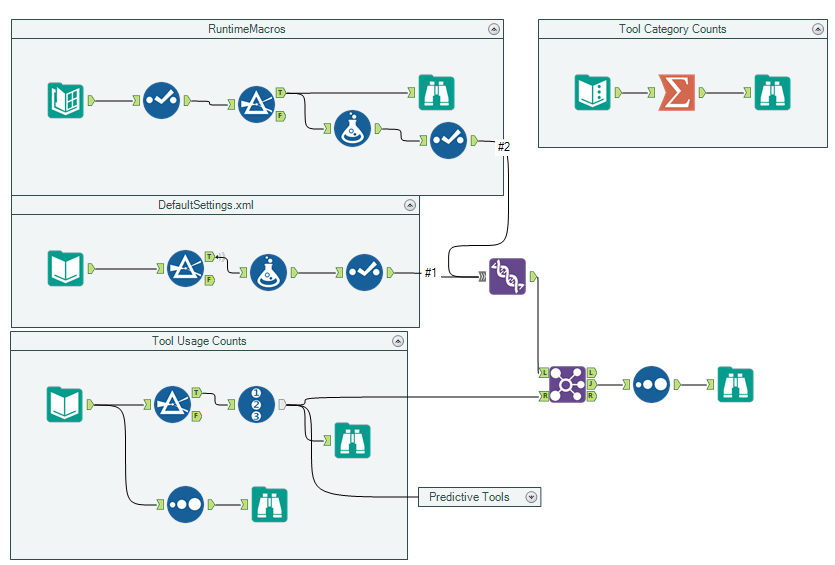 There are many things that are interesting about Alteryx tools. Each having a specific function, an engaging front end, yet mysterious backend, I sought to simplify down to specific, less-obvious categories. I posted in our Alteryx Associates discussion board on community, asking for suggestions on interesting ways to classify tools. The responses included:

I set up a call on Friday morning with @AdamR to do a quick run through with me. He helped me decide what to concentrate on in the list above. We decided embedded select and formula editor were probably not necessary, and instead to focus on the classification of how tools affect your workflow: macro vs tool, tools that require a data install, tools that are optimized by a data install, and this concept of blocking tools, conditional blocking tools and whether tools are multithreaded or not. After 30 minutes with Adam, I had enough data to get started.

How I built the table

I had every intention of using Alteryx for this and I do think it is possible to. It is just a table after all, but I had several obstacles (mostly in the way

there must be over a thousand layers in here! of asset management) and time was not on my side. I knew that if I couldn’t figure it out in Alteryx, the time I had put into it would mean I couldn’t do it at all. So, I am slightly disappointed to say I quickly went to plan B and built it in Photoshop.

I have 2 Photoshop files. One file set up to build each tool – each tool is comprised of its own element table and its layers in a folder – 170 folders. Then I would slide that folder into the template file and put it into position. This was repeated 170 times (plus every time I made a mistake, so probably 3045 times).

Yes, there was a lot of repetition, but it was a fascinating exercise. It was really cool to see what tool came next and what set it apart. By Tuesday I had a rough draft that I could pass around and get feedback on. And I received A LOT of feedback!

I was lucky enough to have @Ned drop by on a different topic. I handed him a paper copy and asked what he thought. He pulled up a chair and we geeked out for the next 60 minutes or so, looking at each and every tool – we discussed blocking vs multithreaded and the fact that most people do not understand why multithreading matters. We scaled back the multithreading classification to only include it on the tools that will utilize each CPU in the stack.

After my time with Ned I went back to my monster Photoshop files and made some changes. He also encouraged me to classify the Interface and Documentation tools as tools where no records pass.

What does it all mean?

Some more verbose descriptions of the above legend:

Optimized by data install – This tool will have additional options if an Alteryx Analytics Data Set is installed.

Tool icon and anchors – The tool image that gets placed on the canvas and the type of connection anchors that indicate how data comes into and out of the tool.

Multithreaded – These tools will utilize all cores of the computer it is run on. The more cores, the more records Alteryx can process.

Tool rank by popularity -  Tool usage data is collected each time a workflow is run. I used the resulting counts to determine the order of the table.

Records stream – meaning no additional magic other than the magic of Alteryx touches this tool. Ned would argue there is no magic in Alteryx. Of course, we all know he is Dumbledore, Gandalf, Merlin and Shazam all rolled into one.

Blocking tool - Some tools need to read the contents in more than one pass, such as any tool that sorts the records prior to executing the tool process. Temp files are created so that the second pass can happen faster. A blocking tool will not pass any records until all records have been read.

Conditional blocking tool – These tools are only blocking tools in certain configurations such as a Check box that calls for grouping records.

No records pass – These tools are cosmetic and therefore pass no records in or out.

Requires a Data Install – These tools require a data install such as an Alteryx Analytics Data Set.

Tool Name – this is the tool name as it appears in the tool palette.

By Wednesday I had a final version of side one, and it was time to use Neil’s classification of the Predictive tools. Admittedly, I was burnt out at this point. Had I had even one more day, I could have done more, but I was able to knock it out Wednesday night and drop the files to the printer first thing Thursday morning. 1300 copies were ready by Saturday morning and they made it into my carry-on suitcase weighing over 35 pounds. Yes, I was stopped by TSA.

I am already thinking of the next revision of this table. The first change I will make is to get it into Alteryx. That step boils down to placing all the icons with the right file names and their connection anchors into a directory, and building a data file with all the pertinent classifications. The next thing I need to do is create an alphabetical and rank lookup so that you can find tools a little easier in the table. I’d also like to add the numbering to the Predictive side and color the borders with the classification. Maybe I’ll even include a classification for interactive reporting outputs.

After that I’m all ears – what would you like to see in a future version? Are some of the classifications we left out initially interesting enough to include? What about tools that have a 1-tool example or a Tool Mastery article - should they be called out?

There are two PDFs attached to this post below for the front and backside of the poster. Any print shop should be able to print and laminate an 11 x 17” poster for you. With lamination, it will run around $5.

I made two small edits to the front side of the tool poster.

Thank you to @PaulaA - her eagle eye spotted these 2 inaccuracies. 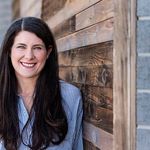 
Tara McCoy is the Creative Director at Alteryx. Since joining Alteryx in 2004, Tara has held roles in Product Management, Content Engineering, and Community where her focus has always been on delivering an amazing product experience with Alteryx. From designing product icons and community badges, procuring excellent swag, concocting engaging contests, and crowdsourcing content from internal and external Alteryx advocates alike, Tara is dedicated to the Alteryx brand and wants everyone to experience the thrill of problem solving with Alteryx.

Tara McCoy is the Creative Director at Alteryx. Since joining Alteryx in 2004, Tara has held roles in Product Management, Content Engineering, and Community where her focus has always been on delivering an amazing product experience with Alteryx. From designing product icons and community badges, procuring excellent swag, concocting engaging contests, and crowdsourcing content from internal and external Alteryx advocates alike, Tara is dedicated to the Alteryx brand and wants everyone to experience the thrill of problem solving with Alteryx.