Alteryx lets “citizen” as well as professional data scientists construct rich analytical business models.  The same wealth of tooling that makes this richness possible also means that modelers face many model-design decisions.  Citizen data scientists especially may be unaware of the alternatives, or of the subtleties that determine which alternatives best fit a given business problem.  One way to tackle this complexity effectively is to apply data-science design patterns.

Many disciplines contribute to data science.  As a result, there are often several words for the same data-science idea.  For example, a model’s raw input data may be called (among other things) input variables, source variables, independent variables, attributes, or dimensions.  We’ll stick with input variables.  This is the data you explore (and perhaps collect), before you change it in any way, and before you decide which parts of it matter for a specific modeling problem.  Usually the input data appears in a table.  Each row (other than the heading row, if any) represents instances of a group of things you want to model (often called the population).  Each column (other than the columns identifying the population members) contains an input variable.

(Yes, it would be odd really to include IQ in an EMR.  You’ll see below that it’s a good example of an irrelevant variable, which is why it’s part of this example.)  In future posts we’ll explore design patterns that can help you decide what data sources and datasets are likely to contain legitimate input variables for a given problem.

Quite often you have more input variables than are useful in making a single type of prediction.  For example, a model predicting a person's percent body fat might only need height, weight, age, and gender; adding the other variables (IQ, say) to the model might not improve its predictions.  Choosing a good set of input variables is surprisingly tricky, for several reasons.  Here are four of the most important:

There are design patterns that can guide you in deciding when and how to address these issues, in part by choosing a good set of input variables.  It’s important to recognize now that your decisions about input variables, variable transformations, and induction algorithms are related.  Failure to make these decisions together often amounts to an antipattern we’ll review later.

You may have noticed that we did not include an algorithm for choosing a model’s induction algorithm, even though we mention above that variable selection is related to that choice.  Until recently the choice of induction algorithm has usually been manual.  Model-selection (and model-combination) algorithms are however an area of active research.  If you know enough about data science to be familiar with these developments, you probably don’t need to read this blog series. 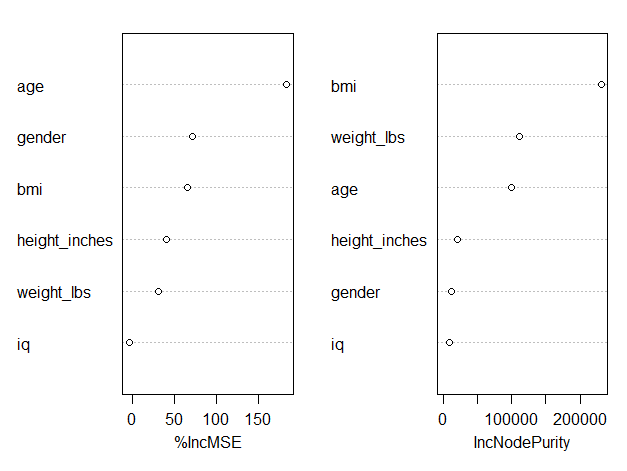 Note the differing estimates of variable importance—in this case generated by a single algorithm.  (Note too the IQ doesn’t matter by either measure!)

There are many DSDPs within these general patterns.  Future posts will explore some of the most useful transformation patterns.

Transformations generally have one of the following motivations:

Of course, here as elsewhere, when we describe a DSDP, we’ll always tell you what motivates the pattern, so you know when the pattern applies.

In our next post we’ll explain a model’s functional form.  (Every model has one; some just hide it better than others!)