Siemens was founded in 1847 in Berlin, Germany. They have a total of 380,000 employees around the world. In this use case, discover how Siemens automated their data preparation and load process with Alteryx for their entire operating company smart infrastructure. They saved significant time in preparing tons of data for productivity reporting. With Alteryx,  literate and non-IT professionals can get faster reports. On top of that, Siemens was able to implement a fully-integrated process for a large and complex corporate financial data model in a code-free, fast, and agile way.

Siemens operates in 85 countries, so consolidating financial data from the entire company is complex and it involves everyone in the finance departments. They integrate financial data with external market data, productivity data and detailed data on customers or products. The finance department calculates a lot of KPIs, growth rates and margins aggregated through a regional hierarchy through a business segmentation. And all of that, was done in spreadsheets. You can imagine that they are not small spreadsheets!

What you often see in finance organizations are spreadsheet templates, then Excel spreadsheets with a lot of formulas that normally comes with a lot of model risk embedded. For example, there is a complex formula calculating some key KPIs which then go to a C level person, and that person makes any decision upon an error in that formula. Also, if the analytical question changes just a bit, often times the controller has to go back to the computer, do the whole analysis again on the spreadsheet, and get back with the answer. It normally takes a lot of time and effort, and it’s a nightmare.

All their Alteryx workflows are hosted on Alteryx Server and can be scheduled to run whenever they desire. And that's fully integrated. That means data is extracted directly from the sources and run through the workflow and then directly goes to Tableau Server.

Siemens is now using Alteryx mainly on data preparation. They create their workflow on Alteryx Designer, publish it to Alteryx Server, which is also called Gallery. Once in the Gallery, they schedule that workflow to run every X hours. Data is extracted while the workflow on the Server runs through the workflow and goes directly to Tableau Server. With Alteryx reporting tools, they can control and make sure the processes are running smoothly. For example, they are using an email tool so if anything fails in that workflow, they will get an email with a notification immediately. If there is something wrong, the person in charge can intervene accordingly. This process runs every 2 hours with data volume of around 50 million data rows. 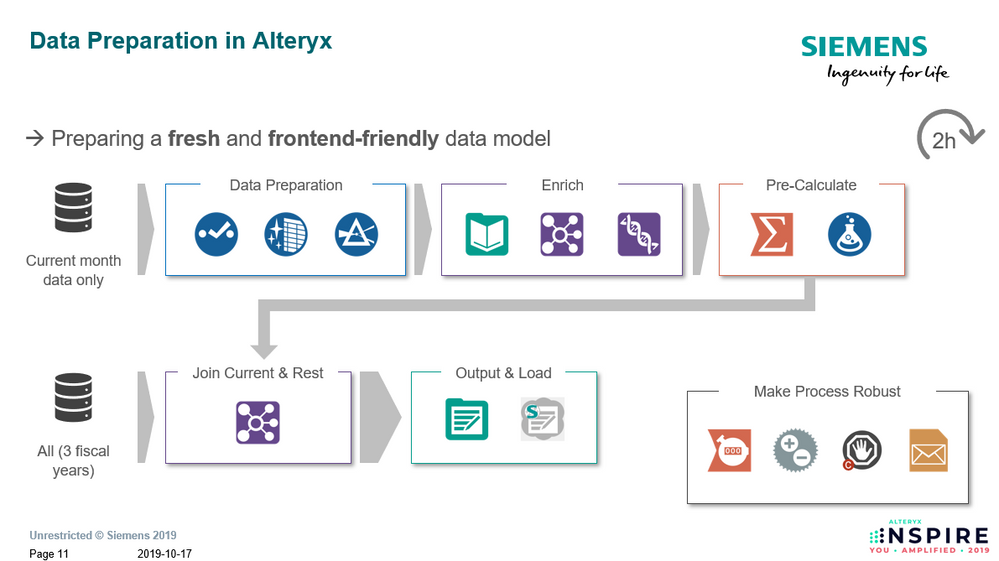 At Siemens Gas and Power, productivity means that you either output more with the same resources or you output the same with less resources. They have a wide tracking tool called PUMA which is used globally for tracking productivity. To implement the productivity tracker they defined the goal, brainstorm the potential impact, and implemented a concrete plan that could show the financial impact. These steps are how they track productivity and it’s important for the reporting. When Tony got into the team in 2016, they used static quarterly PowerPoint reportings where they used ThinkCell based on Excel.

In 2017, they were introduced to Tableau, however, the data preparation part was still done in Excel which brought them to a very manual process. It took Tony up to 4 hours to run through the process because he had to go into the PUMA tool, download Excel files, then run them through a whole number of VBA macros and open Tableau, update data sources and then publish it to the Tableau Server again. It was around 3,000 lines of VBA code, which are hard to maintain, even if he wrote them himself, after a year, you have to change something because the fiscal year changed. It was just a nightmare. It was also really difficult to hand this over to another person. And with manual updates, it was also prone to errors. They found themselves in Excel hell and they really wanted to get out of this. Now with Alteryx, they have an automated update which runs every three hours and it just takes Alteryx five minutes to do that. 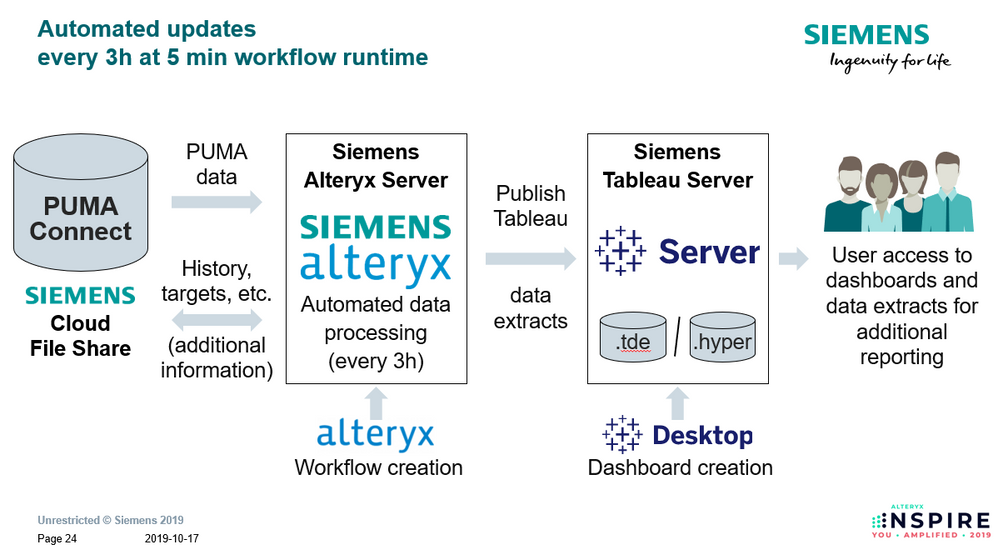 The PUMA system doesn't provide all the information they need. For example, the targets are separate, and the historical data is not part of the output. So, they join some information that is stored in Alteryx database files on the cloud file share. This is a really fast connection and really easy. With the Alteryx workflows and the publish to Tableau Server tool, they publish directly to the Tableau servers faster. And since the PUMA system is used in Siemens by their 380,000 employees, they can easily scale this solution to the whole company by sharing the workflows at Alteryx Server with other users.

The combination of Alteryx and Tableau allows Siemens to see results super-fast. They can answer complex question very quickly and of course, reduce many manual efforts. They have fewer people downloading data and running it through the spreadsheet. Now those people are actually doing analysis which then translates into better insights.

Alteryx and Tableau together are helping them define business requirements. They don’t have to assign the requirement to some technical export anymore as they can implement themselves. It helps them to avoid the disconnection between the business and the technical expert. Right now, they can implement the end-to-end business solution by themselves in just a few weeks instead of months. Alteryx’s self-service capabilities allow teams to move very fast in analytics projects and have full control over process and updates.

It's also a platform to exchange ideas on productivity actions because it's now transparent for everyone in the business and the Alteryx workflows are super easier to maintain. Siemens has most of their data in ERP systems, so the data connection capability of Alteryx Server is crucial. The SAP HANA connector allows teams to easily access all SAP data which hosts all operational information that is used for business intelligence. The Siemens internal Alteryx community is also showing significant growth and it’s helping build data literacy in the organization.