Cutting edge technologies, such as tax engines, are critical for tax compliance and essential to the running of smooth business operations as they assign the right tax treatment to the transactions of a business the world over.

Sergio Avalos, from PwC in the UK, used Alteryx to leverage his client’s tax engine implementation, using it for the mass testing of the engine’s configuration by fully automating the creation of 3,500 test scenarios to validate the tax codes being assigned to the transactions.

The workflow he created automatically also created output files such as a PDF report and output files for visualization, which updated a heatmap dashboard, highlighting all the countries results, good or bad based on the performance of the engine - saving the client over 10,000 hours of testing they would have otherwise needed to incur to get this level of comfort over their implementation.

With the new trend of digitalization of the tax authorities, in which real-time reporting and e-invoicing has already been adopted in many countries across the globe, tax determination is more important than ever before. Cutting edge technologies such as tax engines are critical for compliance and a smooth business operation, but successful implementation and ongoing maintenance is key to their continued value to a business.

In tax engine implementations, the most critical aspect is to test the setup of the system in order to determine that the correct tax determination is being returned. In order to do so, implementers and inhouse tax teams create manual invoices in the ERP system and then call the tax engine for tax validation (account payables) or for tax calculation (account receivables). This is a huge and time-consuming manual effort in which it takes on average three minutes per invoice to test each transaction. For these types of projects, in which it is common to see hundreds of legal entities and business scenarios, deriving thousands of tax codes, it is a mission impossible to test the entire setup of the system. It is because of this heavy administrative burden that during implementation projects it is common practice to have test rounds (often called “User Acceptance Testing” instances), in which a really small subset of these critically important scenarios are tested.

The problem with not being able to test the entire setup of the system is that it creates cascading issues in the customization and knock on costs to next steps of the implementation. The untested scenarios result in the business constantly having issues that have to be addressed thus extensive troubleshooting is undertaken, this means the teams need to continue configuring the system, while potentially creating setup on top of mistakes. This often causes delays, frustration and mounting costs during the adoption of these types of technologies.

In addition to these issues, every time that there is a major regulatory change such as Brexit, or a new country, legal entity, product, rule or scenario that needs to be added to the tax engine, a new round of testing is required to confirm that the system is working properly before moving the configuration to the production environment. In that sense, the relevance, and cost of effective testing is well beyond implementation, it is also a critical aspect of maintenance and updates.

Seeing the issue for his client’s, the natural question for Sergio was then: How can I try to address all this with Analytic Process Automation (APA)? What if I connect Alteryx to the tax engine and leverage the testing phase with it?

I used Alteryx to automatically create all the test scenarios, to call the tax engine, to validate whether the response from the tax engine matched the expected tax code or not, to create an automated PDF report with overall and per country performance, and to create output files for visualization tools such as Tableau.

I started by extracting all the tax codes that were setup in the tax engine, which for the particular project I was working on were more than 7.000, for an implementation of more than 40 countries with account payables and accounts receivables. From the spreadsheet with all the tax codes, and other input files, I was able to create the entire logic in Alteryx. 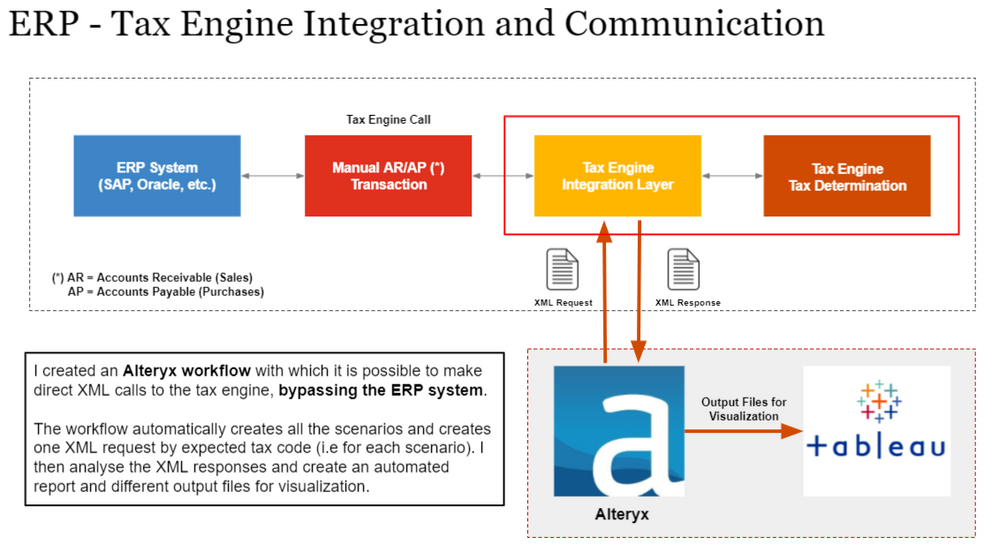 With different tools I was able to read the XML response, pick up the tax code and with the logic I could determine whether the tax code sent from the tax engine to Alteryx matched or not the expected tax code (i.e. the one that should have been triggered based on the information that I sent in each particular scenario/XML request). If it matched, it was a pass, otherwise it was a fail.  In addition, I created a one page automated report with an overall performance overview, performance by country (i.e number of scenarios with pass/fail and success rate per country), reason of failure, and several output files for visualization, with which the user can quickly have an idea of the sanity of the tax engine.

With these files I was able to create a dashboard in Tableau with a world map, highlighting the countries with a heatmap based on performance. I then also allowed the user to extract and read the XML requests and responses, to analyze the information related to each scenario, and to troubleshoot where the errors were. 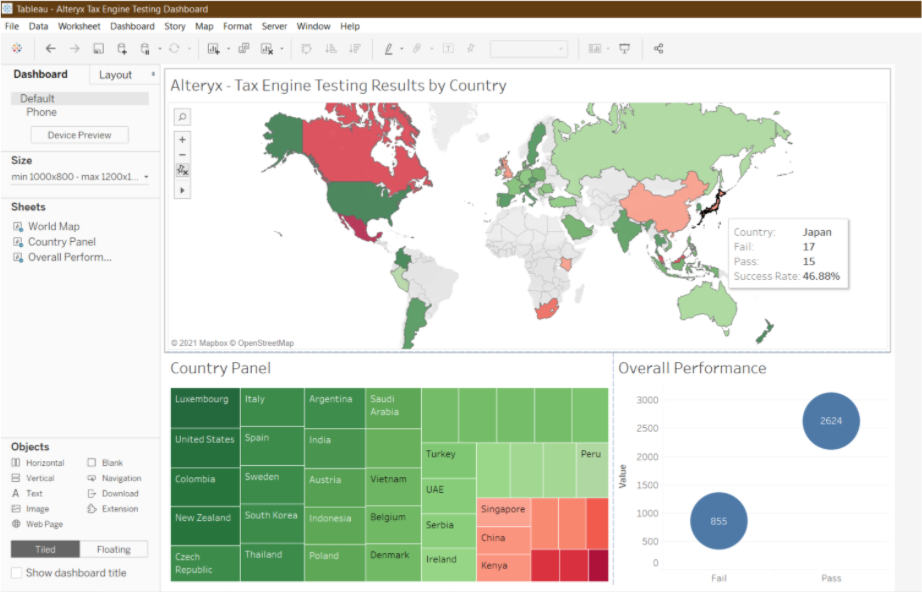 Tableau Dashboard with heat map based on performance

This automation is a breakthrough and a game changer in tax engine testing. Just to provide you with an idea, it took eight minutes for Alteryx to run the workflow, create 3.500 scenarios, call the tax engine, receive the XML response, read the response, perform the analysis, create the report and create all the output files. Without the workflow and considering that it takes on average three minutes to create an invoice in the ERP system in order to analyze one single scenario, the impact of the solution allowed us to reduce the effort from 10.500 minutes to eight minutes. This means a reduction of 99.92%. If we consider that testing is required many times during an implementation project, and also in maintenance and updates, the impact is amplified exponentially. For a single project, you can easily save thousands of hours.

This groundbreaking solution is now being used for all the PwC led tax engine implementations, maintenance and updates, and goes beyond a single tax engine. The solution is ERP agnostic (I am bypassing the ERP system by making direct calls from Alteryx to the tax engine) and it can easily be adapted to be used for different tax engines in the market.

This all translates into a tremendous amount of hours saved, a vastly improved level of comfort and assurance for businesses and a better use of manual resources. It is a complete and revolutionary change to the approach for this kind of project.

What before was impossible, to test the entire setup of a tax engine, now is possible thanks to Alteryx.

Awesome work . I really like the concept which is used.

I wonder if PWC uses Tableau in all use cases or if they similarly plugin Alteryx workflows into PowerBI or other visualization platforms per request of the client?

It's wonderful to see Alteryx in action.