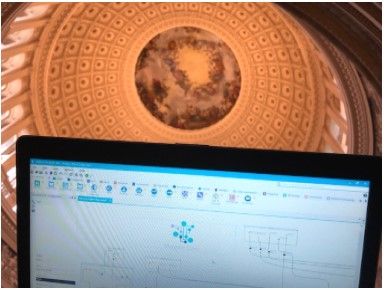 #WorkFlowWithAViewAs an Alteryx ACE, besides the colorful Polo shirts, we share a private room in the Alteryx Community.  It was there that the Health & Human Services (HHS) code-a-thon was announced.  Alteryx was looking to sponsor a team of ACEs to represent and to help to find solutions for the growing opioid epidemic.  We would travel to Washington D.C. and show them our stuff!

Leading up to the event

There were a couple of hurdles ahead of me:  Would I be picked as a team member?  Would our team be picked by HHS to participate?  Would my grandson be born in time for me to go? And finally, could I leave my client(s) to participate?  One by one, these hurdles fell into place and I was on my way to join @patrick_mcauliffe, @JohnJPS and @andrewdatakim.

Ahead of the code-a-thon we met a few times to discuss strategy and how we might attack the data.  Using Patrick’s knowledge of drugs (it’s not what you might think, he’s a licensed pharmacist) and drug theft, we were going to go into the usage track to help identify at-risk groups. At the last-minute HHS asked for volunteers to switch tracks to the Treatment track.  We volunteered not knowing that Dr. Dan Putler (@DrDan) was leading an Alteryx team as our competitor.

Patrick and I travelled together from Grand Rapids, Michigan.  We arrived early in the morning the day before the event.  Having time on our hands we did what most people would do in DC, we answered community posts and took pictures of stately Alteryx workflows.

We walked to the Capitol, sharing our pictures on twitter along the way!

Later, we met up with the rest of the Alteryx folks.

So ended our boondoggle. 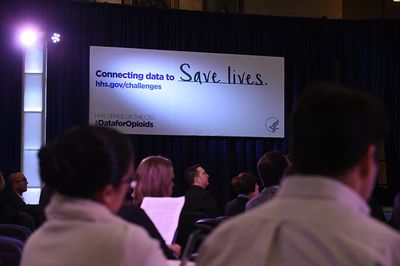 The HHS Opioid SymposiumIt was a sold-out event.  We were asked to attend four hours of content prior to the code-a-thon from a viewing room on the 8th floor.  Instead, as ticket-holders we sat with the audience and I live-tweeted with each presenter.  #DataForOpioids was happening and we were there to take part.  The gravity of the subject weighed heavily on the audience and the statistics became more personal as we were educated not only in counts and measures, but in tears as loved ones were dying.

The Government was humble and asking for our help.  This wasn’t a zero-sum game with a single-winner.  Thousands were dying and we could all win with the prevention of tragic loss of life.  I don’t mean to be dramatic, but this is how we felt.

The bell rang and we had 24 hours to view data (data that we had to sign contracts to see and promise to delete) and look for patterns that could save lives.  We were off and running workflows.

Deaths occur everywhere.  There were no places of sanctuary.

Don’t be fooled to think that opioid addiction and death can be avoided by age, income or geography.  While the likelihood of death from opioid use spikes in certain geographies and while those who have been incarcerated have significant risk of dying, the map of the US is marked with death.

We then looked at where treatment is available.  That’s where telling differences in geography exist.  There are 18 congressional districts found within 8 States where no treatment centers are located.  While we didn’t have measures on how effective each of the treatment centers were or how many people were treated each year we saw 0 to 22 treatment centers per district with an average of 4.5.   Zero seemed to be clearly the wrong number.  Within those districts with no treatment centers, we saw thousands of deaths.  We pointed fingers and named names.  We associated each district with the elected representative and attached contact information as metadata to the polygons.  Where things were brightest, we hoped to demonstrate hope.  Where things were darkest we wanted to bring compassion and help.

The team looked at literally every data set available.  We had the capacity to blend data from all sources.  No other team demonstrated that ability.  We went down several dead-ends, but did so quickly.  We were unprepared for the tide of available data.  Data from diverse sources and with varying levels of summarization.  Data has many shapes, sizes and colors.

We said our goodbyes and headed home.  We were exhausted, some more than others (kudos to Andrew for staying up all night!).  I quickly shared my initial thoughts with the community and thought about the contents of this blog.  When I spoke about the event at the Detroit users group I felt a tear forming and took a breath.  I was touched by the event.  We were all affected and are ready to continue our efforts.

As the signs read, “Connecting data to Save Lives.”  That’s what we were doing.  Alteryx for Good can mean joining with others for a local need or taking on national or global projects.  It can focus on the use of Alteryx and data or it can take shape as packing meals for needy families.  AFG opens the door to giving and rewards me with the opportunity to share with others.  I’m closer to others because of AFG and less focused on myself.

When I got home I shared time with my son and granddaughter who were visiting from Portland, Oregon.  I then headed to Chicago to see my newest grandson.  My dogs were elated to see me and my work was eagerly waiting for me.  Many posts to community were answered by both expected sources and new members.  Life had continued without me for those few days in DC and we came out stronger.  Even after the demands of the event, we came home ready to give more.  We had flexed our physical and mental beings and are now better prepared to give in all aspects of our lives.