@Alekh - I am finding the same problem with the challenge tracker I have been using.  Pages come back from the download tool with missing data, even when isolated to its own workflow.  Currently, page 5 of my recent posts (where I pull attachment data) doesn't come through, but I can look at the page on Chrome with developer tools and it looks fine.

I've attached the latest version of the tracker that I use, this is still working.

It's been tweaked a little by @ddiesel to be a batch macro to feed in  multiple usernames.

@mceleavey - I have the download of if a reply to a Weekly Challenge has been made working.  Mine looks at the actual Weekly Challenge pages for the threads instead of the Weekly Challenge index, but it works fine.  The issue I am having is with the completion requirement to have a spoiler or an attachment to the reply to the challenge, specifically webscraping the recent posts page for a user to see if Weekly Challenge replies include an attachment.  This exercise is to continue honing the skills I learned in the webscraping training at #Inspire19 as I think my workflow is valid and I am trying to debug this error.  Once I link my update workflow together I will post it for others to help evaluate.

Ok, I had time today to work on an update. The previous version of my challenge tracker stopped working because the download tool suddenly became unreliable when downloading a user's post history.

I was browsing through my settings a few days ago and stumbled upon this page which has a JSON file at the bottom of the page with a user's entire post history. It's almost perfect. It contains whether a message has a spoiler/attachment/image all in one place which makes it considerably easier than what I was doing before and allows me to filter out plain responses that (to my knowledge) shouldn't be included as solved. However, It's missing what message/thread the post was in response to. It does say it in the subject matter but there were unique instances from before where someone may edit the subject matter. So to know what each post was in response to, I linked it with the restapi url for a user's post history and joined them together. The JSON also doesn't mention the userid for the restapi url so I still had to keep the iterative macro that found a user's userid.

The biggest change I made was the inclusion of another app which lets a user select among their unsolved challenges based on level of difficulty and subjects. This would be useful for those trying to find specific challenges to help them improve.

This brings the total runtime to 6-7 seconds which is also a massive improvement. All the workflow needs is the JSON file and the username. I was initially going to use python/curl to download the JSON automatically using an inputted username/password but I didn't think it'd be consistently reliable if used by a large range of people. I even tried doing it manually through the download tool using multiple post requests but got stuck when having to manually rehash/encrypt the passwords with the HMAC/salt/password without the assistance of python.

@LordNeilLord this is nice! I guess for the all time view the fewest tools used isn't really relevant as I guess the count of 1 is people who have done maybe one weekly challenge which uses one tool? Could you do it on top 10 count of unique tools used?

Here's the stats for challenge 178: 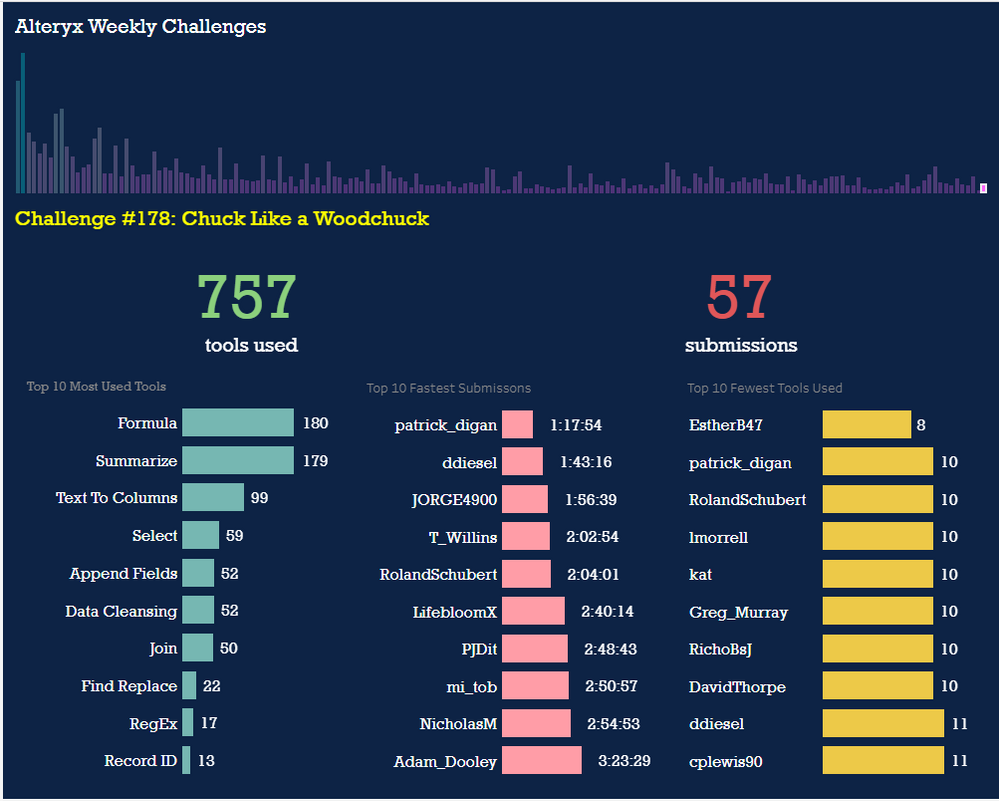 Just like @mceleavey and @Alekh I've been working on a weekly challenge of sorts....

In this app you can enter your username and a file location on your computer and it will download all of the start files for challenges that you haven't yet done. In addition it also has a CSV showing you the submission dates for all of your challenges 🙂

If you want to download all of the challenges, just leave the username blank.

You can get the app here: 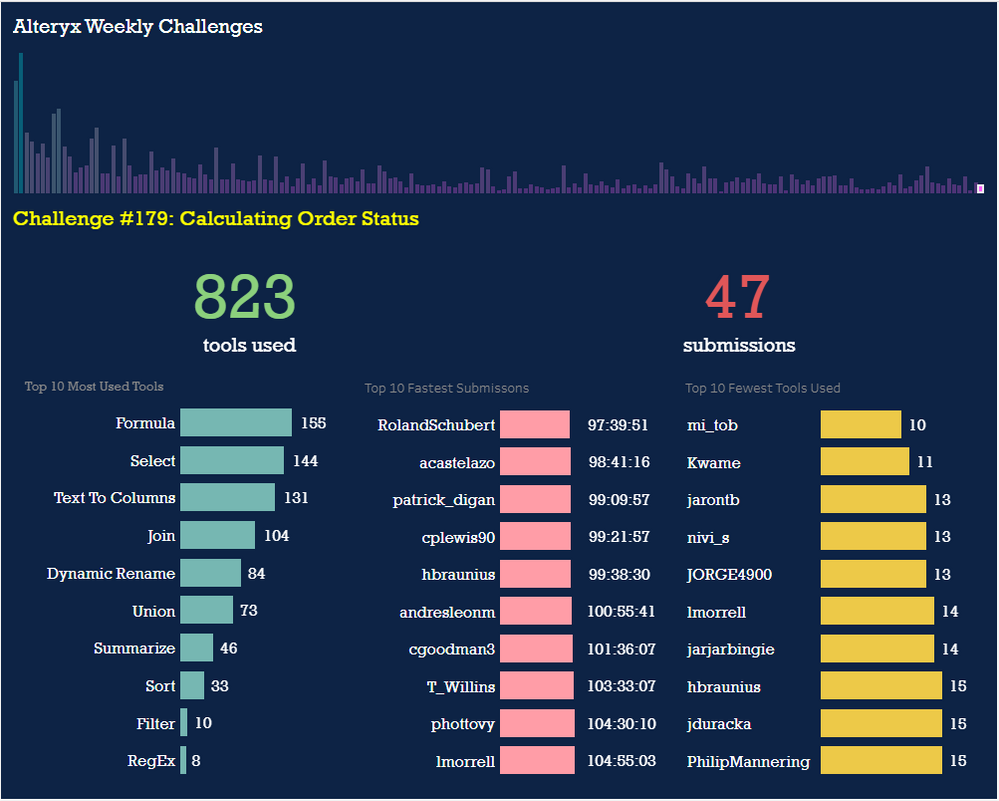 A bit late this week but here are the stats for last week! 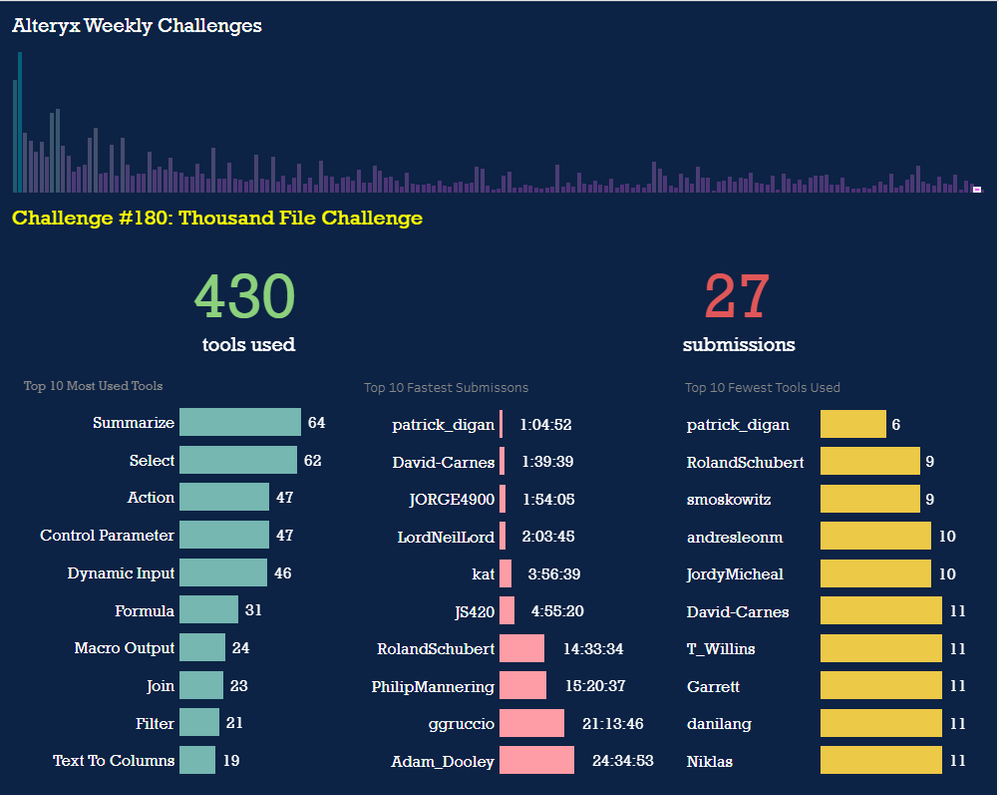 Congrats to @patrick_digan for being the quickest and using the fewest tools!

@LordNeilLord These stats are pretty cool!