Video games have become a ubiquitous part of culture over the past few decades. What started as giant consoles became miniaturized for use at home. As popularity increased and technology advanced, more titles were offered by various companies. Whether you wanted to be a frog hopping across the street, stack odd shapes falling from the sky, or defeat the dreaded space invaders, there was a game for you.

Over time, many companies innovated with different categories of games which expanded or create new genres. These games were made available for a variety of platforms - the hardware running the games.

This week's challenge is to parse the provided video game dataset into columns.

Regex to the rescue....again. Solution attached.

And with three tools I'm not going to pretend that this is pretty... or efficient... but it works!

I don't play video games like I used to but this has made me nostalgic for some Mario Kart 64!

Some tricky regex in here. These challenges are excellent practice for regular expressions.

I posted a video of my solution here: https://youtu.be/I80eCfDph2Y 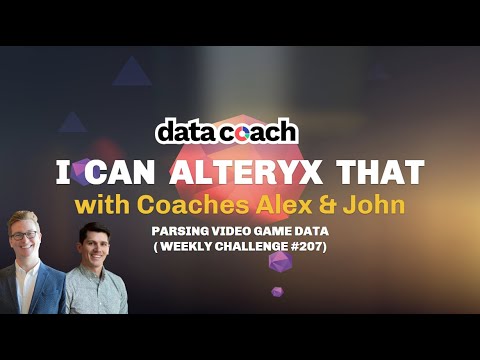 Managed to solve without RegEx ...

Great RegEx practice for this challenge: Used Regex and tried to use minimal number of components Attempted to use only 1 RegEx tool to parse a significant amount of the data.