Learn more
I AGREE
We've recently made an accessibility improvement to the community and therefore posts without any content are no longer allowed. Please use the spoiler feature or add a short message in the message body in order to submit your weekly challenge.
We are aware of an issue with the Search bar. Please use Advanced search for the time being while we troubleshoot. Thanks for your patience as we work on improving the community!
community Data Science Portal Alteryx.com
alteryx Community
Sign Up Sign In
Search
Turn on suggestions
Auto-suggest helps you quickly narrow down your search results by suggesting possible matches as you type.
Showing results for
Search instead for
Did you mean:
Close

Challenge #101: The Search for Powder

After a few good snowstorms here in Colorado, snow aficionados have an important question on their minds: where's the freshest powder on the slopes?  Well, at least that's the question on @ChristineB's mind!  This week, we're using Alteryx to figure out the best place to ski (or snowboard, if you're into that sort of thing) in Colorado.

The National Water and Climate Center manages a network of sensors, SNOTEL, that collect data all about snow.  The SNOTEL sensors collect historical data (condensed into daily data) on variables such as temperature, snow water equivalent values, and precipitation increments.   We'll use the variable Precipitation Increment (in) as our measurement of recent snowfall.  Using the past seven days worth of data, in conjunction with the shapefiles for Colorado's ski resorts, we'll identify the sensor that has recorded the highest amount of precipitation accumulation and the closest ski resort to that sensor.

Download the SNOTEL data from each sensor in Colorado using the following link: https://wcc.sc.egov.usda.gov/reportGenerator/view_csv/customSingleStationReport/daily/303:CO:SNTL%7C.... Each sensor's data must be downloaded separately. A list of the sensors site number (i.e., 303 in the above link, which is provided in the Input URL for Data from SNOTEL) is provided in the input SNOTEL Sensor Sites. To access the SNOTEL site for each sensor download, see this site: https://wcc.sc.egov.usda.gov/nwcc/tabget?state=CO. That will give you an idea as to how the data is accessed through the SNOTEL platform.

NOTE: Because data is dynamic, the final solution will change depending on when the data is downloaded. This solution is correct as of 1/23/18.

I've got my snowboard ready!

@patrick_digan your workflow reminded me that having the Cache Datset macro installed is a really good idea for this Challenge!

I didn't know about the handy-dandy Cache Dataset macro, but I did temporarily get around the problem of run-time while developing the workflow by filtering to only the first 5 records until it was working... Another small tweak I made was to make sure my 7 days of data didn't include today's data, since I noticed the 1/23/2018 data didn't have any precipitation numbers recorded yet (the day is still young...).

Hitting the slopes sounds fun - but I think I would be falling down quite a bit!

Great exercise!  The value for today shows as NULL so I went back 8 days to get a full 7 days of data.

One of the (many) nice things about Alteryx is it's ability to get the same solution whilst using different tools.  I've been using RegEx a lot lately, so I reached for that tool to build my URLs.  The previous three submissions  came at if from a   way  simpler direction.  Anyway, as of 1PM  EST, 24 January 2018, Wolf Creek  is were you want to be.

Forgot to mention, in the event of a tie, the  one with the lower average temperature wins. 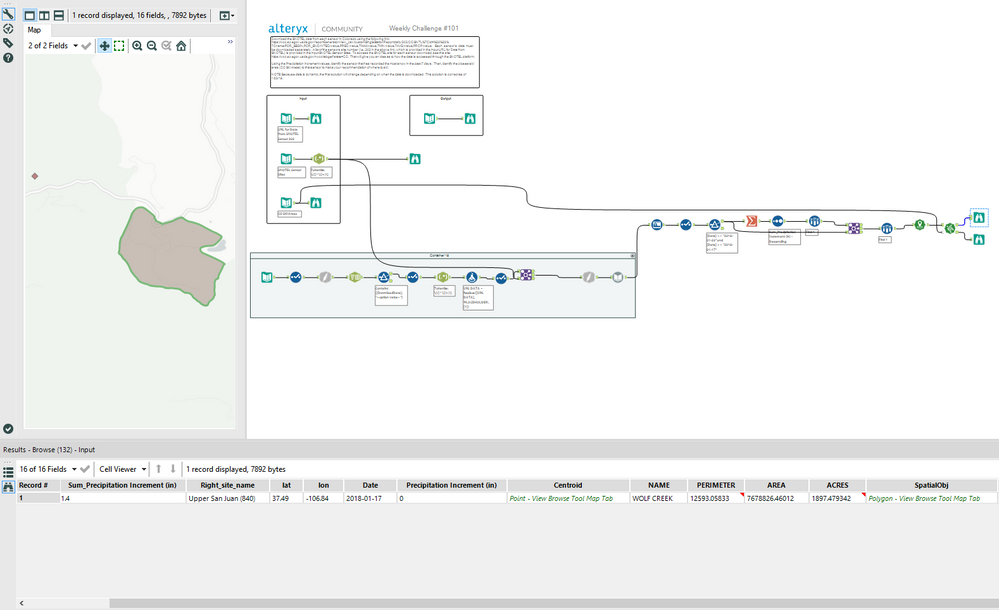 At the time Steamboat Ski Area had 2.3 inches of snow in the last seven days...