Think Like a Champion: Kat & Nicole, Ready to Answer your Grand Prix Questions!

We are @kat and @NicoleJohnson! Back in 2018, we took the Grand Prix by storm and made it the year for women solvers, taking the Grand Prix Champion title home at both Inspire Europe and Inspire North America!! We are excited to answer any questions you have today around our Grand Prix experiences: how we prepared for the race, what the competition was like, our favorite tools to use, best songs on our playlists that got us pumped up... whatever you want to know!!

And if you’re interested in competing in the Alteryx Grand Prix (you should!!), check out this blog post about registering for Grand Prix 2021! 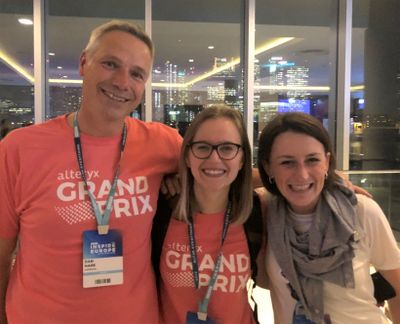 Solving at speed when under time pressures can really scare people. During our user groups we did fun challenges in front of people to help new alteryx users get over the solving whilst people watch. What tips do you have to help people over those fears of people are watching me do it moments.

Also how did you celebrate afterwards? What really brought it home for you both?

All right folks - this was SO MUCH FUN. @kat and I loved reliving the moment with you all, and we are excited to see some more faces on that (virtual) Grand Prix stage this year - so go sign up!! Here is the link for registration info  one more time - you have until tomorrow to sign up! Just go for it - you will not regret it!!

We're off to go do some more Alteryx wizardry and such, so might be a bit slower to respond... but feel free to keep the enthusiasm & the conversation going! Would love to hear stories from others who have competed, or your own plans for how you are going to prepare for the prelims and the big race itself.

Thanks for all the Grand Prix love - we couldn't have done it without you, Alteryx Community!!

@kat and @NicoleJohnson , I was the thorn next to two roses !

@Samanthaj_hughes - I LOVE the idea of "practicing" at user groups, that is an excellent strategy! This will definitely come in handy while YOU compete this year - I am so so so glad you signed up!! Now I just have to try to keep up with you haha...

As far as getting over the fear of people watching you solve, here's what you should keep in mind: the problems you are given in the Grand Prix are ALWAYS going to be solvable. Someone told me that before my race, and it really resonated. Think about it: it would be a pretty lame show if there were a bunch of people on stage staring blankly at a screen/getting the wrong answers for an hour. So to begin with, you have to go into it believing that it is solvable... and then you have to believe that YOU can solve it.

There is certainly an element of speed that is helpful, but accuracy is key too, and not making silly mistakes... so do what you gotta do to block everyone else out, and focus on doing what you know how to do. Also, adrenaline can really make you do incredible, superhuman things. So like @kat said earlier - prelims were almost harder. The excitement of the Grand Prix on the day of is unlike anything else - and more than scary or nerve-wracking, it was really just FUN!

And in the end, it's totally worth it even if it is a little scary - the post-Grand Prix celebration in Anaheim was LEGENDARY. I think I shook hands with like 500 people, got a few random job offers, took pictures with strangers, signed someone's nametag... and I can still vividly picture Dean Stoecker yelling and leaping up on stage when they finally announced the photo-finish results. It was insanity 🙂

Also, getting to have that enormous trophy on my desk at work for a year was awesome. You could see it from across the office!

My best advice is don't compete a few hours after you get off of a plane on barely any sleep. (very delayed flight + very rushed tasks to be done at the venue = very poor performance)

Seriously though, take deep breaths, think about the problem before you jump in, and then go as quickly as you're able. It's a ton of fun regardless of anything that happens when you're on the stage.

@estherb47, very good advice and I don't blame you. I myself can't function without a good night's sleep... and I am not talking about a "brain race". But I agree, at the end, the fun always wins! 🙌