If you were wondering about the guy doing the rap session with Seth Greenberg, he is Baba Brinkman.

Baba is from British Columbia, Canada.  His mother is Joyce Murray, a Member of Parliament in the Justin Trudeau government. He is married to the cognitive neuroscientist and television host Dr. Heather Berlin, who has hosted science shows on PBS with Neil deGrasse Tyson and Bill Nye the Science Guy.

Early in his life Baba was a tree planter, having planted more than 1,000,000 trees.  He later studied human evolution and primatology with the orangutan researcher Biruté Galdikas and wrote his thesis comparing modern Hip hop freestyle battling with The Canterbury Tales by Geoffrey Chaucer.

He now writes and stars in shows on Off Broadway. 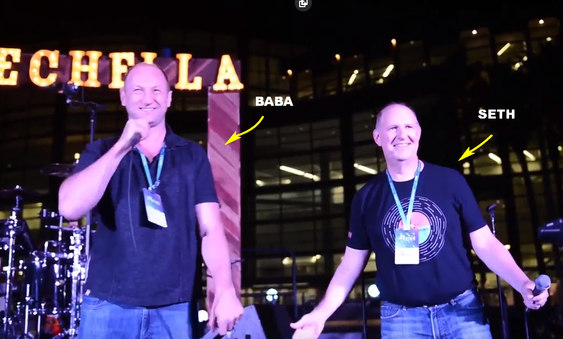 That's one impressive family. Thanks for sharing @derekbelyea!

If anyone has video of Baba free-styling with @SethG on stage, please post it to this thread. It was dope.

You can see more of Baba's "Real Seth Greenberg" antics during his "Rap up" of Inspire Day 1 here: