How are you creating stability in a time of turbulence?

Last week Alteryx CEO & Founder @dstoecker published a great Forbes piece about the opportunity we, the global analytics community, have to solve complex business and societal challenges — especially during times of stress.

“In the context of a global pandemic, the rules of the game have changed and businesses are suddenly asked to produce the same output with broken operations, limited resources and less clarity on what our world will look like in the next week, let alone the next month, quarter or year. In turbulent times, good information, good data and the capacity to derive good decisions with analytics are more critical than ever.”

Read the article in its entirety on Forbes.

Right now, the power to solve new challenges, both big and small, is at your fingertips. Whether you’ve been tasked to reevaluate flight schedules, optimize hospital capacities, or simply want to maximize your personal ‘social distancing’ strategy (& avoid this situation) — we’d love to hear from you!

How are you using your analytics skills to create stability, either for your business, industry, or in your personal life?

Please reply to this thread to share your thoughts. We look forward to the discussion!

Tagging in a few ACEs (and @NickJ & @ShaanM) to get the conversation going:

Thanks for starting this off Leah - I always feel that those who work in the analytics space operate under the mantra of 'Situation Normal - Everything Must Change' since our roles of generating and communicating insight often lead to both innovative and disruptive transformation: sometimes profound, yet sometimes painful to enact.

However, from my view in the UK we're seeing an unprecedented change to our fundamental culture almost in slow-motion as other countries are already days-to-weeks ahead of us on the dreaded curve. This is not so much a 'black swan' event, but rather a 'black bull'...obvious, noisy and visible from the horizon.

As you shared with your link, the UK has been slow to enact a lockdown policy and this has led to some pretty unpleasant scenes at supermarkets where shelves are stripped bare, the vulnerable are left with nothing and the distance between queueing shoppers leaves a lot to be desired.

I started thinking about the concept of ‘rationing’ – which most people usually think of as coming from the supply side. As an example, during wartime, people were restricted by the range of products that they could buy in any given week, based on a ticketing system or ration book. However, what’s also possible is to consider demand-side rationing – actively changing or transforming consumer behaviour to ensure that we limit the size of populations that could be crowding into supermarkets at any given time.

There’s plenty of precedent for this in other countries, particularly China where cars are often ‘rationed’ to specific days of the week, based on the last digit of a license plate. If your plate ends in a ‘7’ you don’t get to travel into cities on a Tuesday, and so on.

The hypothesis here goes something like this: If your UK postcode is SW2A 1AA, then I look at the 1 digit and put you in the odd group. If your postcode is SW2A 6PJ, then that 6 digit means that you’re in the evens group.

Odds group get to visit major supermarkets on certain days/times of the week; Evens groups get the other slots. That way, 50% of a potential consumer-base is restricted at any given time based on the customer’s home address.

The outcome? Supermarkets get a smaller, more controllable demand and less congestion. A simple address/ID check is applied in-store to make sure people are complying (I'm sure there's no such thing as 'simple' in the context of the current upheaval, but when France locks down its population and requires a signed letter of intent that can be inspected by police, it doesn't seem so burdensome).

So, I used Alteryx to download a list of Postcode sectors for the UK, and blended this with total residents to understand populations for each code. My first experiment was to see how balanced each postcode area was if we split the postcode sector first digit into odds and evens. Alteryx 20.1's holistic data profiling gave me some nice clear results.

Overall – this actually wasn’t too bad at all (on average), definitely a normal distribution centred around a 50:50 split, but there were some more extreme outliers (the TD postcode – the Galashiels area of Scotland south of Edinburgh) had a 70:30 split based on odd/even digits, meaning that we would still be concentrating too many people into one group for shopping on specific days. 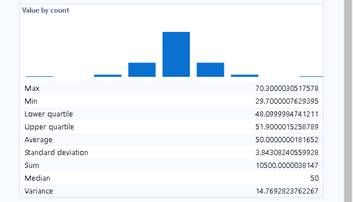 I also took a look at whether I could fix those imbalances using the Prescriptive advanced analytics capabilities of Alteryx. I'm switching gears from descriptive analytics to trying to use Alteryx to help guide me towards the prescriptive answer that I need.

Would such a split help supermarkets control the flow of essential visitors into their stores? Does this make shopping for all the population "fairer" during a crisis? Would this kind of analysis and breakdown work in other countries with different postal code systems? Would a population accept such an imposition? The implications, the ethics of analytics enacted on a population need careful consideration and conversations about data ethics are (generally) long overdue.

Really interesting to read what @NickJ  has been doing (and thanks for sharing with the detail of 'how' included), particularly how the prescriptive tools can help quickly solve some of the more complex (and genuine) problems that are arising.

And thanks for starting the thread @LeahK – I’d love to also use it as a platform to find out if there are any ways I/we can help from an analytics point of view. I’m still on the lookout for ways I can try help in this way: I know they’re out there, the challenge (as ever, in my opinion with this kind of thing) is finding and connecting to the right people to ensure we can add valuable/practical solutions/insight to those able to implement findings. Anyone got any thought on this?

In the meantime, I’ve also been using some of the prescriptive tools, albeit sadly not for a use case which is going to benefit anyone in any need: I was simulating the end of mine and my friends’ head to head sports season to try bring some normality to our group chat. I am keen to see ways this kind of solution (particularly in Alteryx) can be used to simulate things more useful, like how the virus might spread… if anyone has anything to share on this?

Happy to quickly share the case below as I found it an interesting experiment in using and learning the simulation tool, but I would reiterate that I’m only doing so because it might be a start point to start thinking of how simulations can continue to be used (by people WAY more qualified than me) to bring really useful value to the pandemic – if anyone has any ideas of where we can do similar things to actually help, please do share!...

The UK has now stopped all sports matches to protect players, fans, and staff; this includes football which in turn means many of the head-to-head draft leagues are in turn suspended. Our league was quite close before the football got cancelled, with 10 of us aiming to make the end of year playoffs by finishing in the top 4. It seemed unfair to just give it to the current top 4: some were arguing they were on a good run; others arguing they’d had bad luck earlier in the season and were due ‘better luck’… so with a quick bit of webscraping using the Python tool, I could log into our league and extract each of my friends’ weekly scores from the previous year. I then used the Simulation Sampling tool to simulate thousands (~10,000 per person) possible results for future weeks for each player, which would be reflective of each of their previous scoring: 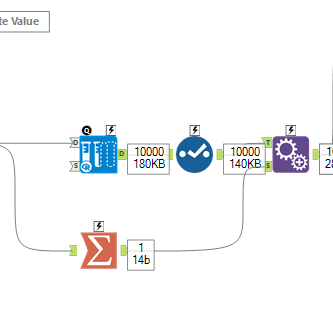 This dataset, alongside an iterative macro, allowed me to play out the rest of the season to see where people would likely finish. Of course, people still might have been ‘unlucky’ in this single season ending (I always seemed to play people having a ‘good week’ this year), so this macro meant I could quickly simulate the season as many times as I wanted.

10,000 end of season simulations (in less than 10 minutes) later, I could see what the final standings might be, as well as how likely each variation might be:

Anyway, if anyone has any thoughts (or better still, data or connections!) based on this to start solving proper and useful problems, please do share below.

Hope everyone is keeping safe and well

Nice to see Alteryx is helping your mates to stay sane Andy!

This is great @andyuttley. I'm just reflecting on how something like this could have been leveraged to save a March Madness contest a few of our Solutions Engineers had put a lot of work into.  The whole thing was dependent on the actual results of the March Madness tournament, which like football in the UK, was cancelled. Side note... I thought the premier league was simply postponed? It would be such a shame for Liverpool to miss out on the title.

And @NickJ -- your perspective on how governments might be able to approach a "rationing" strategy is fascinating. I'm really hoping to hear from customers in the public sector on how they are or are planning to address these challenges.

This whole conversation really got me thinking about what now seem like endless opportunities to solve practical problems, things that I literally have spent no time thinking about until now... and that really only boil up to the surface during times of crisis.

I am eagerly waiting to hear what others are thinking about!

Wow - thanks for opening the discussion on this item.

One of the key things that come to mind is something that @NickJ  mentioned in his post. The move to predictive analytics.  As we begin to see many of these various businesses come back from this moment, a strategy to go-forward will be a central theme in the minds of many of our organizational leaders.

Analytics - both prescriptive and descriptive will play a central role in those conversations.  On key thought for me is something that was brought to light in a post @LDuane made about data literacy.

I work with high school/college students in my community and see the need to aid the future generations in development a mindset around data literacy, data awareness, and data-driven decision making.

Because, to move the various organizations and the world at large forward, there will be an increase demand to move forward with data-driven strategies.

Thanks @LeahK for opening up this conversation.  I can also imagine that Alteryx For Good platform can be leveraged to empower organizations around the world to move forward from via strategic and analytical focused conversations.

LOVE being a part of this community and looking forward to seeing the power of the Alteryx Community in the effort to help move the world forward.