Use this group to build a community of Alteryx Users in the Denver, CO area. It is open to all who are already Alteryx users or want to explore the capabilities of Alteryx Advanced Analytics Platform. Ask questions, share ideas and best practices related to Alteryx analytics platform.

We are pleased to announce the upcoming Q3 User Group meeting is taking place on Wednesday, September 18th 2019 at the Alteryx Broomfield office! Alteryx will be hosting in their building and providing pizza and beer! 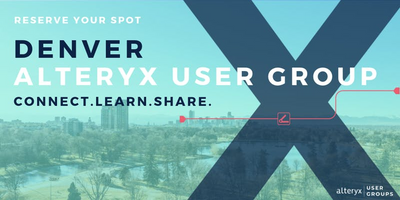 This meeting will be filled with networking among local Alteryx users, tips and tricks and a panel discussion with Alteryx ACEs by Heather Harris and Jesse Clark!

Jesse Clark - Known as the first person to obtain the Alteryx Expert Certification, Jesse's superpower isn't that he can solve the impossible, but that he assists others in doing the same!

Hope to see you there!

Awesome, thanks @CSand ! Looking forward to meeting you and the group as well!!!