How can leaders encourage data scientists to experiment? Best selling author John K. Thompson joins us to share tips, including the importance of having a psychological understanding of what drives data scientists. 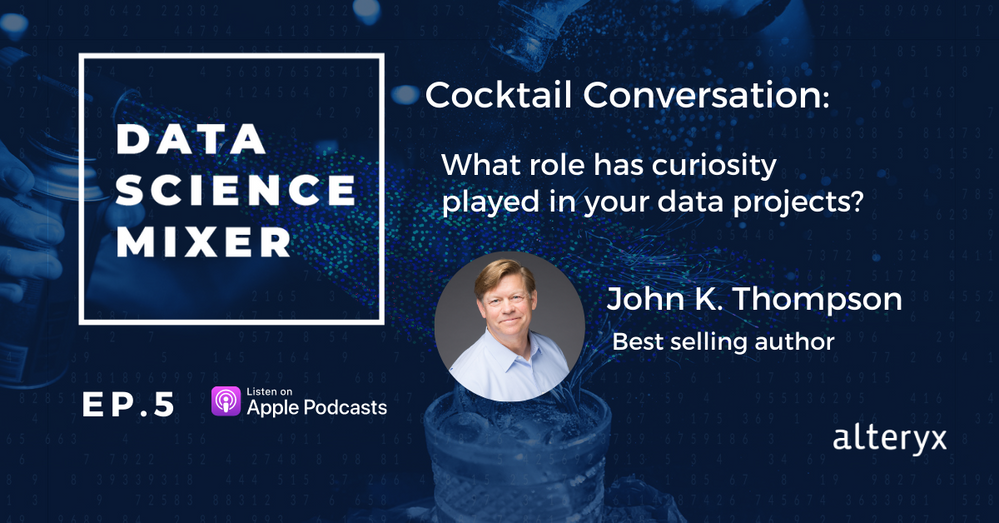 What role has curiosity played in your data projects? Has it helped you ask a creative or unusual question at the right moment? Has curiosity helped you advance your career?

We're giving away two copies of John's book, Building Analytics Teams, so be sure to leave a comment by 4/20/21 to enter!

I’ll definitely add this to my running podcast list. Building analytic teams is part of my day job!

Love his philosophy of being flexible with schedule and deadlines. A lot of the challenge is keeping enough room in your workload to allow for that flexibility. So often, the team is not large enough, and the demands are so high, that there is no extra bandwidth to think creatively and tinker. That also means no time to learn new technologies, techniques, software, etc. It is what I like to call "the tyranny of the urgent."

It is because of this that we began setting aside a block of time to do our own thing - whatever we wanted. Could be reading a book, watching videos, experimenting with a feature of software, building a dream project, or whatever. This is similar to what Google called "20% time." We started out with just 4 hours per week. We figured not much gets done on Friday afternoon anyway, so we put it there. We called it "Data Science Friday," and even created a logo we hijacked from NPR's Science Friday. It wasn't long before we realized so much good usable productive stuff was coming out of it that 4 hours per week wasn't enough, so we dedicated the entire day on Friday every week to Data Science Friday.

@blyons, great points. I love the concept of Data Science Friday (and, as an NPR fan, especially the Science Friday connection!). Fantastic that it's been such a successful initiative for you.

Did you discover anything in particular on one of your Fridays (a book, video, etc.) that you're recommend to others as a source of inspiration?

@SusanCS, thanks for asking. Here are just a few examples by different team members over the years.

@blyons, what a fun logo! Thanks so much for sharing these. (I especially love the 2 months vs. 15 minutes comparison!) That's a terrific list of things folks tackled. Such a great opportunity to learn and to explore possibilities that might not immediately fit into your everyday work, but that pay off in new ways of thinking and unexpected applications.

What a great podcast! I enjoyed the flexible schedule and the concept of Project vs Program.

@KevinHarrison I thought that was a cool point as well! Especially as a reminder of the importance of being clear with LOB leaders and setting clear expectations.

So glad you enjoyed it!

@KevinHarrison, @cgoodman3, and @blyons thank you so much for chiming in on this Cocktail Conversation!

As you may have heard at the end of the episode, we had two of John Thompson's books to give away to folks who responded to this thread. Instead of picking which two would get a copy of his book, I've ordered another copy so all three of you can enjoy!

I'll DM each of you to get addresses 🚚📬

I’m looking forward to reading this.

(plus I am obsessed with Schitts Creek gifs after @ElizabethB‘s certification post got me interested in Schitts Creek!)

Shamefully I haven't given in to the Schitts Creek craze! But with an endorsement from @cgoodman3 I think I'll need to give it another shot 😊