News, events, thought leadership and more.
Register for the upcoming Live Community Q&A Session - and don't forget to submit your questions for @DeanS regarding the future role of analytics here.
Options
Showing articles with label Qlik. Show all articles

Building a Flexible, Thriving Analytics Ecosystem with Alteryx and Qlik

At Adventist Health System, the Alteryx and Qlik analytics stack, with its depth and breadth, helps empower users with the flexibility to achieve new limits, reduce mundane work, and take deep dives into new realms with data. Read their story and then register for our May 17th webinar to learn even more!

Join Alteryx at Qlik Qonnections May 15-18, 2017. Learn how Alteryx and Qlik accelerate data preparation and speed up the delivery of advanced analytics to business users in a self-service, searchable environment.

A Tighter Integration Between Alteryx and Qlik

Seamlessly transition data from Qlik to Alteryx using the new QVX Read feature. Eliminate having to re-format your .qvx data into an Alteryx-readable format. Work with the same single .qvx file in both products, thus making it easy to transition between Alteryx and Qlik.

Today marks the launch of the Qlik® Visualize Your World Roadshow, starting in Dallas, TX.

Qlik Honors Alteryx with Technology Partner of the Year

We at Alteryx are proud to have been named Technology Partner of the Year by Qlik Software (NASDAQ: QLIK) at their 10th annual Global Partner Summit Qonnections . Qonnections has been an exciting event to participate in as a sponsor and as speakers. Find out which sessions Alteryx will be presenting.

Many North Americans have never played rugby and some have never seen a rugby match. I was lucky enough to play rugby as a child in Canada and continued to play well into my twenties. I still spend many of my Saturday mornings watching games. So when Accenture contacted us about using Alteryx In a project for a rugby tournament about 18 months ago, needless to say, I was excited!

Even if you aren't a rugby fan, you can't help but be impressed with the near-real-time data analytics work that Alteryx partner Accenture UK has done for the RBS 6 Nations Rugby Championship. For those not in the know, the 6 Nations is a 100-year-old tournament is one of most famous annual competitions, featuring the national teams of England, France, Ireland, Italy, Scotland, and Wales, won narrowly this year by Ireland. Accenture is the Official Technology Partner of RBS 6 Nations, a partnership that began in 2012.

Accenture employs "an integrated digital approach that combines analytics, mobility, and social media. To deliver unique insights into game-changing moments throughout the tournament, Accenture's analytics experts processed more than 1.9 million rows of data during every match. The analysis and up-to-the minute statistics were available to mobile device users throughout the tournament, providing fans with new information, a new perspective, and a new way of seeing things."

So how has Alteryx fit in? Tom Welgemoed, analytics delivery manager for Accenture UK, explained that Accenture replaced a previous tool with Alteryx because "Alteryx can run data blending and analytic workflows 10 times faster" and they never looked back. Using Alteryx for both live processing and post-match data, Accenture developed algorithms that analyzed and scored each player's and team's overall performance throughout the game. Then, through the mobile app, fans could see up-to-the-minute "positional battles" and team "momentum tracker." That's where the speed of Alteryx really shined.

Built-in predictive analytics capabilities in Alteryx allowed Accenture to generate live and pre-match predictions based on past events and trends. These analytics also fed visualizations, powered by Tableau, which were pushed out live on Twitter during the game, as well as the the mobile app, which presented dashboards and near-real-time analysis using QlikView. To develop their ideas for both game data visualizations, Tom and his team worked closely with experts from the rugby world, including coaches and players. 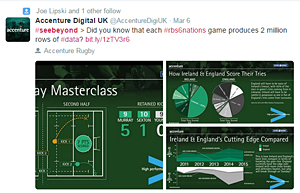 Then, after each match, Accenture also published defining moments, vital statistics, and the impact of certain events for media and enthusiastic fans.

Many of the team at Alteryx and thousands of fans around the world followed through Twitter and Accenture's Official 6 Nations mobile app. We can't wait to see what else Tom and his team have up their sleeves for next year's tournament!

We are putting together a more in-depth case study on Accenture's work with 6 Nations and we're thrilled to say Tom will also be speaking at Inspire 2015. Yet another reason to register!

Watch the  video that Accenture created for this project.

Previously, Seann was Director of Business Development at KACE, where he led the company’s most strategic relationships, including Dell and Apple. KACE was subsequently acquired by Dell in 2010, where he went on to lead all aspects of the acquisition integration and expansion of KACE across EMEA. Prior to KACE, Seann held numerous business development and alliance roles at Sophos, a leader in IT security software, where he managed partnerships with the likes of Google, Cisco, Microsoft and Apple.

A Recipe for Success: Self-Service Data Preparation for Qlik®

There's no question that spatial data can add a powerful dimension of context to traditional and big data analytics. It provides the proverbial 'whe

The Power of Predictive Analytics

The power to predict future business conditions and know customers' wants and needs is a huge asset for any business leader. While traditional BI can