Learn how the Special Investigations Unit (SIU) at SCAN Health Plan used Alteryx to identify pharmacies engaged in lidocaine compound schemes, where they are dispensing medication to patients who don’t need it.  Using network analysis, SCAN Health Plan analyzed claims data to understand which members overlapped between pharmacies to identify unexpected connections between pharmacies.  This led to $1.5 million savings in fraud avoidance in the first year.

SCAN Health Plan is a health insurance company based in California that focuses on Medicare Advantage programs. SCAN members are an elderly and a vulnerable population. The Special Investigations Unit (SIU) at SCAN identifies risk and issues that affect their program integrity. SCAN Health Plan felt that they were behind in their ability to leverage data and analytics and wanted to be more competitive.  Their goal was to reduce the amount of time spent on non-repeatable, manual risk activities.

Before Alteryx, The SIU team was having difficulty responding to numerous ad hoc business requests. Without an analytic tool, they were only able to address one issue at a time. This was not an efficient use of time or resources, they needed to find a way to automate these risk investigations.

A large prescription fraud scheme surrounding Lidocaine, a pain cream, became evident in 2015, but had not yet affected SCAN at scale. By early 2017, SCAN members began reporting receiving large quantities of unwanted Lidocaine ointments by mail.

The criminal conspiracy regarding the creams went on for more than two years and involved defrauding numerous health care insurance providers by getting them to pay trumped-up charges for the ingredients of such medications. The perpetrators prepared and sold prescription medications in bulk quantities to meet falsely claimed special patient needs.

SCAN noticed something was wrong when they saw prescriptions claims for $300, $500 or $1,000 dollars which is significantly higher than regular prescription price. The team also began to question whether members really needed this much lidocaine as it was much higher than the average.  To do the analysis, SCAN had historically used Microsoft SQL, but realized that it couldn’t scale to handle this volume of data.

The SIU team at SCAN selected Alteryx to identify pharmacies engaged in the lidocaine compound schemes.  The solution used data prep and blending, the network analysis tool and output to HTML. This output is based on various fields that all measure centrality, the measure of importance.   The analysis of the claims showed many clusters in the middle, with some smaller clusters around the edges. The smaller clusters represent pharmacies with a handful of members with normal activity.   The large center clusters mean that just one pharmacy was associated with 200 members alone, which is a red flag for the SIU team. 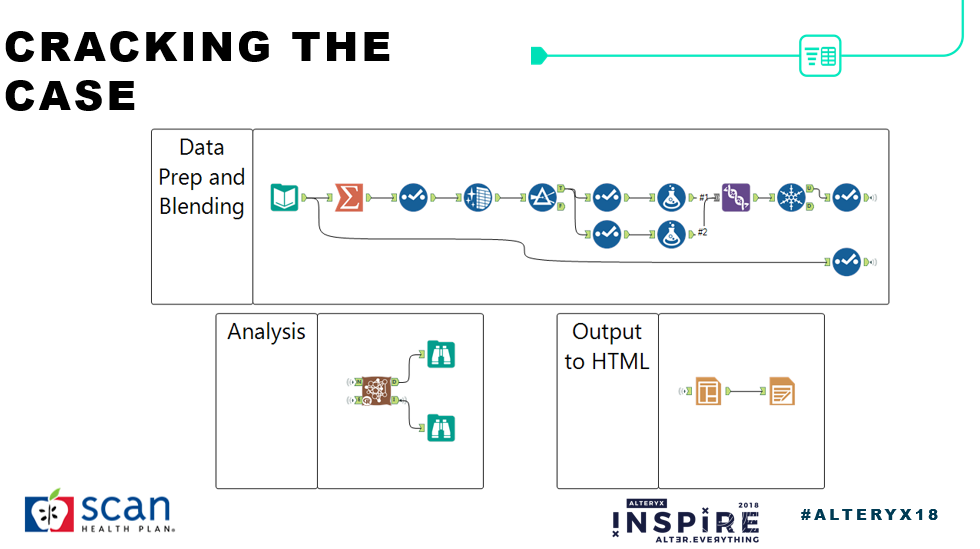 Above is a screen shot of the network analysis. Each red X indicates a pharmacy that the team targeted for an investigation.  Alteryx helped the team to remove fraudulent pharmacies, stopping the distribution of unwanted prescriptions to SCAN members. The solution was deployed in June of 2017, and by the end of the year they were able to stop $1.5 million from going out the door to these predatory pharmacies. The workflow took the SIU team a mere two hours to create. So far in 2018, they have been able to save another million, just for lidocaine claims.

Before Alteryx, SCAN was aware of fraud, but it was anecdotal. Alteryx helped the team to better understand the landscape. The SIU team is no longer investigation on a case-by-case basis. Instead, they can identify situations that appear risky and apply the solution to perform more analysis and locate outliers.

Ultimately, SCAN was able to act and plan more long term while delivering feedback to other business units based on vulnerabilities. The team feels that they just could not have done this complex analysis simply using SQL.

The SIU team was able to prioritize resources in investigations, which is of great importance for this small team with very limited time and resources.  And most importantly, it helped them quickly identify more pharmacies with similar predatory business practices. 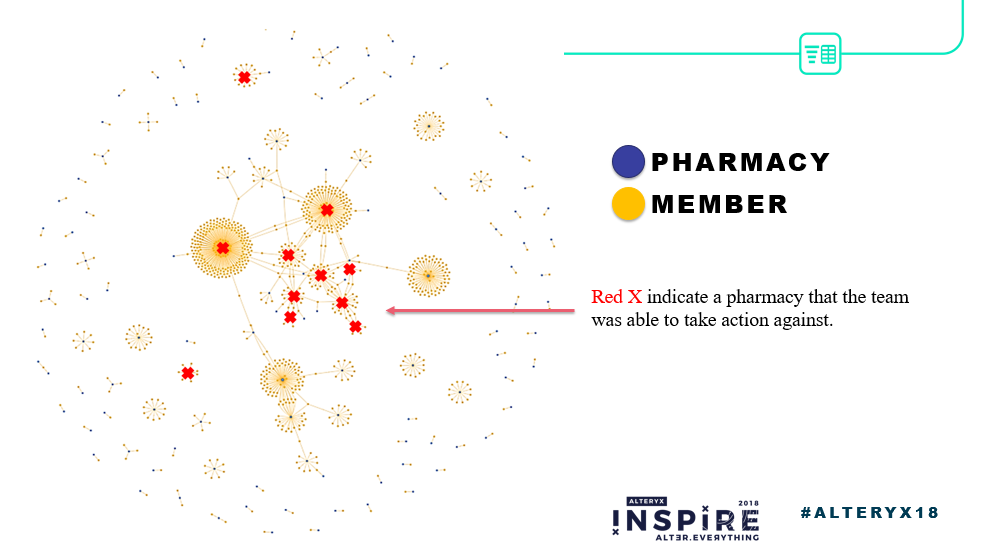 The SIU team is also interested in using spatial analysis in the areas that they serve.  Specifically, they’re trying to get into mapping and drive time. One example is to identify potentially drug seeking members who are going to multiple locations outside of their normal service and assign case managers to investigate. Additionally, spatial could be applied for ambulance rides, to make sure SCAN members are being taken to the closest facilities and getting their services rendered in a quickly and timely manner.