Fuel consumption expense is a major challenge for the airline industry. According to the International Air Transport Association, fuel represented 27% of the total operating costs for major airlines in 2015. For this reason, most airlines attempt to improve their operational efficiency in order to stay competitive and increase revenue. One way to improve operational efficiency is to increase the accuracy of fuel consumption forecasting.

Currently, Southwest Airlines offers services in 97 destinations with an average of 3,500 flights a day. Not having enough fuel at an airport is extremely costly and may result in disrupting flights. Conversely, ordering more fuel than what an airport needs results in high inventory and storage costs. As such, the objective of this project was to develop proper forecasting models and methods for each of these 97 airports in order to increase the accuracy and speed of fuel consumption by using historical monthly consumption data.

Data utilized in this project were from historical Southwest Airlines monthly fuel consumption reports. Datasets were gathered from each of the 97 airports as well as various Southwest departments, such as finance and network planning. Forecasting was performed on four different categories: scheduled flights consumption, non-scheduled flights consumption, alternate fuel, and tankering fuel. Ultimately, the total consumption for each airport was obtained by aggregating these four categories. Since data were monthly, time series forecasting and statistical models - such as autoregressive integrated moving average (ARIMA), time series linear and non-linear regression, and exponential smoothing - were used to predict future consumptions based on previously observed consumptions. To select the best forecasting model, an algorithm was developed to compare various statistical model accuracies. This selects a statistical model that is best fit for each category and each airport. Ultimately, this model will be used every month by the Southwest Airlines Fuel Department.

In addition to developing a consumption forecast that increases fuel efficiency, a web application was also developed. This web application enables the Fuel Department to browse input data files, upload them, and then run the application in an easy, efficient, and effortless manner. Data visualization tools were also added to provide the Fuel Department with better insights of trends and seasonality. Development of the statistical models has been finalized and will be pushed to production for use by the Southwest Airlines Fuel Department soon. 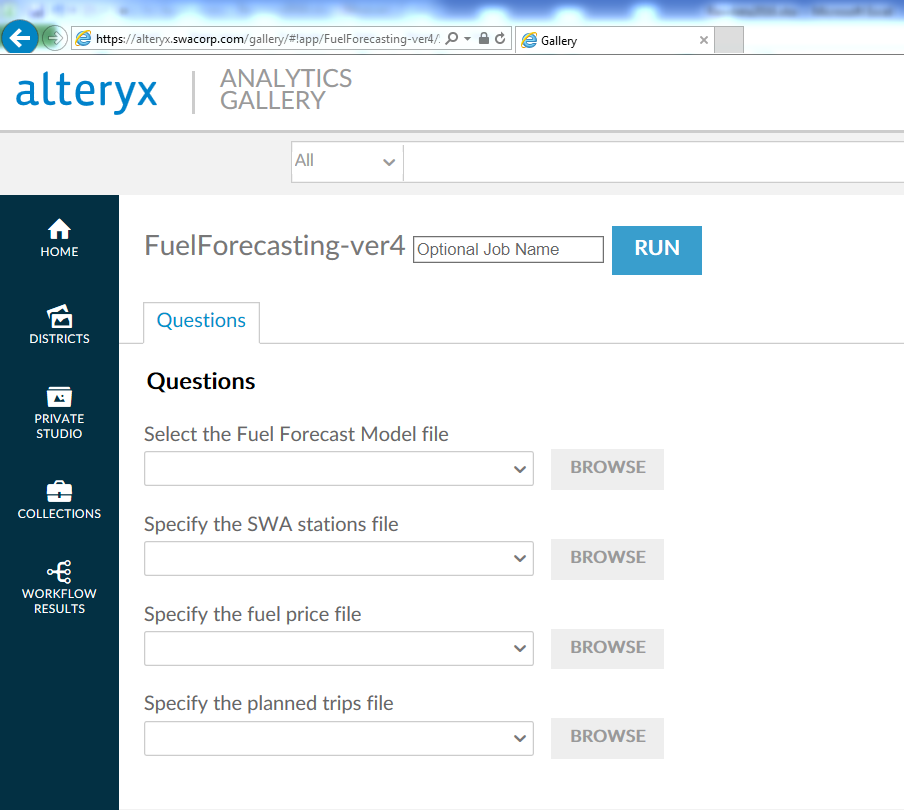 Initially, the forecasting process for all 97 Southwest Airlines airports used to be conducted through approximately 150 Excel spreadsheets. However, this was an extremely difficult, time-consuming, and disorganized process. Normally, consumption forecasts would take up to three days and would have to be performed manually. Furthermore, accuracy was unsatisfactory since Excel's capabilities are inadequate in terms of statistical and mathematical modeling.

For these reasons, a decision was made to use CRAN R and Alteryx for data processing and development of the forecasting models. Alteryx offers many benefits since it allows executing R language script by using R-Tool. Moreover, Alteryx makes data preparations, manipulations, processing, and analysis fast and efficient for large datasets. Multiple data sources and various data types have been used in the design workflow. Nonetheless, Alteryx made it convenient to select and filter input data, as well as join data from multiple tables and file types. In addition, the Fuel Department needed a web application that would allow multiple users to run the consumption forecast without the help of any developers, and Alteryx was a simple solution to the Fuel Department's needs since it developed an interface and published the design workflow to a web application (through the Southwest Airlines' gallery).

In general, the benefits of the consumption forecast include (but are not limited to) the following: