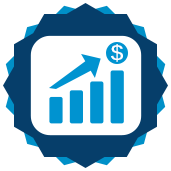 Following our POC with Alteryx, analysts began to socialize the automation benefits and workflows that not only saved an estimated 6,300 hours across 15 projects (realized and projected hours), but that also align with our company mission of making people’s lives easier. Further detail pertaining to the value driven by Alteryx can be seen in the Benefit section below. Using the workflow outlined in the Business Challenge section below as well as other exploratory work in our POC, we were able to see the potential of Alteryx to solve challenges within our analytical organization. As a result of these POC projects, we have launched a series of initiatives outlined in the Solution section below to empower employees across 84.51° to realize the benefits offered by Alteryx.

The original use case for Alteryx within our organization was for geospatial analysis by a small team within our larger analytics organization. After great success in the geospatial space, this team setup a proof of concept for a select number of members of our insights and engineering organizations to investigate the value of the software outside of its geospatial capabilities. One of the projects in our pipeline required automating a PowerPoint deliverable that pulled from a large number of sources located in multiple technologies (i.e. CSV, Excel, SQL Server, Oracle).

The team decided to evaluate Alteryx to tackle this automation task, and the result is an ever-evolving analytic app that leverages a wide array of Alteryx tools as well as custom development called within the workflow. Through this combination, we were able to not only glue together many disparate data sources, but to create a solution that achieved end-to-end automation of a PowerPoint deck in ten minutes, which would previously have taken days for our client leads to complete.

In the process of making this Frankenstein workflow, the team gained exposure to analytic apps, batch and iterative macros, and most importantly, the Run Command tool, which enabled us to call a custom framework developed in-house to populate templated PowerPoint decks with category-specific data without any manual intervention. In the end, it is estimated that this single workflow saves approximately 450 hours annually of repetitive, mindless work; more importantly, though, it exposed our wider analytical organization to all of the power and possibilities that Alteryx offered. Many of the lessons learned in this first workflow would go on to guide future development opportunities and automation that have resulted since. 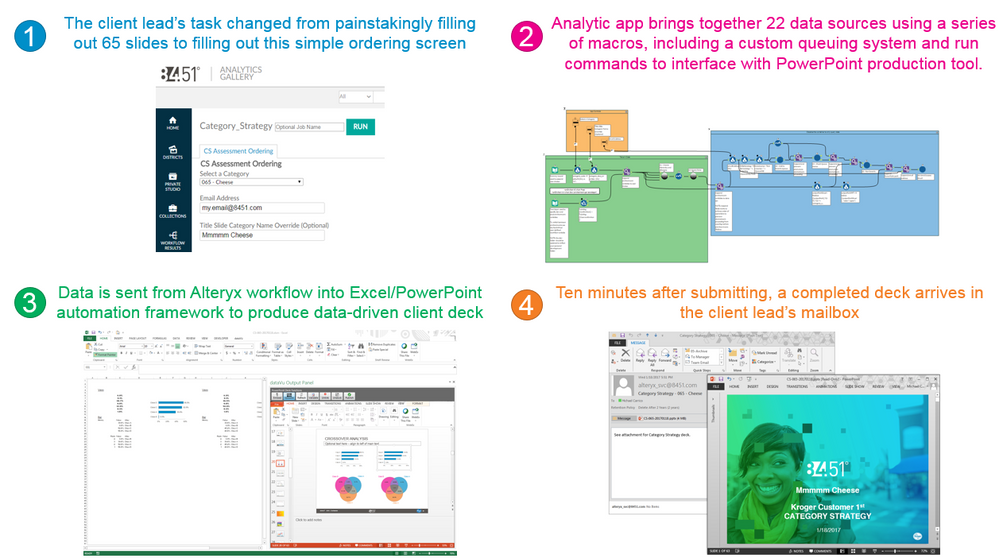 After understanding the power of the tools included in Alteryx as well as the ability to extend them using packaged macros and the Run Command tool, we have continued to find projects well-suited for Alteryx automation. Dreaded data refreshes and endless email exchanges have evolved into scheduled workflows and analytic apps, and our analysts have taken notice. Recognizing this increased interest, the members of our POC began to lay the groundwork for equipping our entire insights organization with the capacity to perform analysis and automation within Alteryx.

Our "A-Team" has since been formed to create Alteryx trainings, standards, a macro library, learning groups, reference guides, video tips, and template workflows to continue spreading the Alteryx love across not only our analytical organization, but our client line and IT groups as well. By supplementing the existing abilities of Alteryx with these company-specific resources, Alteryx has now become a standard starting point for many of our automation tasks, and the success stories that are being shared in company-wide meetings have generated enough buzz that our user base has more than doubled in the last 6 months. In addition to automation, our larger user base is continuing to push the software in other directions such as incorporating new data sources, modeling, and building on the geospatial success that started Alteryx in our organization.

Alteryx has enabled our analysts to think differently about the way that they approach projects. Before Alteryx, several different technologies may have been required to execute various phases of projects. For example, a typical analyst execution plan may have included SQL to pull data from the warehouse, the analyst's programming language of choice to transform/analyze/model that data, and then into Excel/Tableau/PowerPoint for telling the story. This fragmented technology stack caused for inefficiencies in data movement from start to finish, as well as an analytical plan that was not set up for repeatability. Alteryx has facilitated the consolidation of each of these steps into a single workflow that can quickly be flipped from a custom insights project to an analytic app that can either be made available for our client associates to order themselves without analyst intervention or setup on a scheduler to allow periodic refreshes of deliverables.

Members of our insights organization have created analytic apps and workflows that have either saved or are projected to save the organization an estimated 6,300 hours across 15 projects. To put that in perspective, that is over 8.5 months of savings or approximately 3 FTEs over just 15 projects. Many of these hours are recurring so we will continue to realize these savings as these workflows are sustained and enhanced. Furthermore, these automation tasks are not only saving time, but they are enabling members of our analytic and client organizations to work more efficiently now that tasks which previously took days are reduced to hours, and those that took hours are reduced to minutes. Through our training, standardization, and enablement initiatives, we are hoping to scale these benefits from 15 projects spread across 7 analysts to countless projects spread across 150 analysts.