In the last 18 months, Sellafield Ltd. has turbocharged their analytics team with Alteryx. As one of the world’s oldest and most complex nuclear decommissioning plants, they had a dire need for advanced analytics. Using Alteryx, they’ve started predicting the contents of nuclear waste containers using Neural Nets, improving safety by doing sentiment analysis with safety event logs, and helping the national government utilize spatial mapping to visualize all nuclear decommissioning work in the UK over the next 40 years.

Describe the business challenge or problem you needed to solve
Sellafield was created during World War II as an ammunition factory and later converted to a civil nuclear power plant to provide energy for the country. It became the site of the UK’s first nuclear reactor and world’s first commercial station. Now, Sellafield is the UK’s biggest industrial site with over eleven thousand employees covering over six square kilometers.

Given the intricacies of nuclear work, Sellafield Ltd turned to Alteryx to create new analytics and support the decommissioning of the nuclear plant in the safest and most secure way.

In an effort to improve safety, Sellafield was interested in Sentiment Analysis but faced challenges scoring qualitative data for several of their systems. They wanted to focus less on who was saying what and more on the major themes expressed. In Designer, the team created a workflow to better understand the tone of debate for certain topics, taking advantage of R and converting free-text into meaningful groups, which could be addressed by management. Using this information has allowed Sellafield to take actionable steps to significantly improve safety and enhance the overall working environment on the plant.

As a nuclear plant, Sellafield has a host of nuclear waste stores, consisting of rows of metal cans that safely store waste and prevent contamination. The process of transporting and inspecting each metal can is very laborious and dangerous, so they were challenged to find a better way of determining which cans were at risk and needed to be re-packaged. Prior to Alteryx, their analysis model was painstakingly slow to calibrate and very cumbersome.

In one afternoon, the team created a Machine Learning workflow to completely replace the existing solution, while also dramatically improving the results. The new workflow eliminated any code and could be understood by non-PhDs. Alteryx let them effectively train the machine learning models, increasing accuracy by analyzing inspected cans and comparing them to the at-risk cans. As the team continued to refine their data, Alteryx made the process very simple with repeatable workflows. Sellafield has seen big speed gains from their trained models and risk predictions have been “100 times better than random chance.”

As a national leader in the nuclear industry, Sellafield Ltd. was asked by the Nuclear Industry Association to help create maps to show what nuclear decommissioning was going to take place in the next 40 years. The vision was to provide an interactive map that could easily provide visuals on any upcoming projects.

When starting on the project, the team found the data provided was from many different formats and sources, requiring standardization. Alteryx was able to crunch, clean, and spatialize all the data and output to one standard format which could be uploaded to ArcGIS. This took the team 2 hours to complete but likely would have taken someone in the government months of work. The result was a beautiful dashboard, which is available online. This data is key for policy makers and vendors who want to strategize based on the upcoming decommission activity. 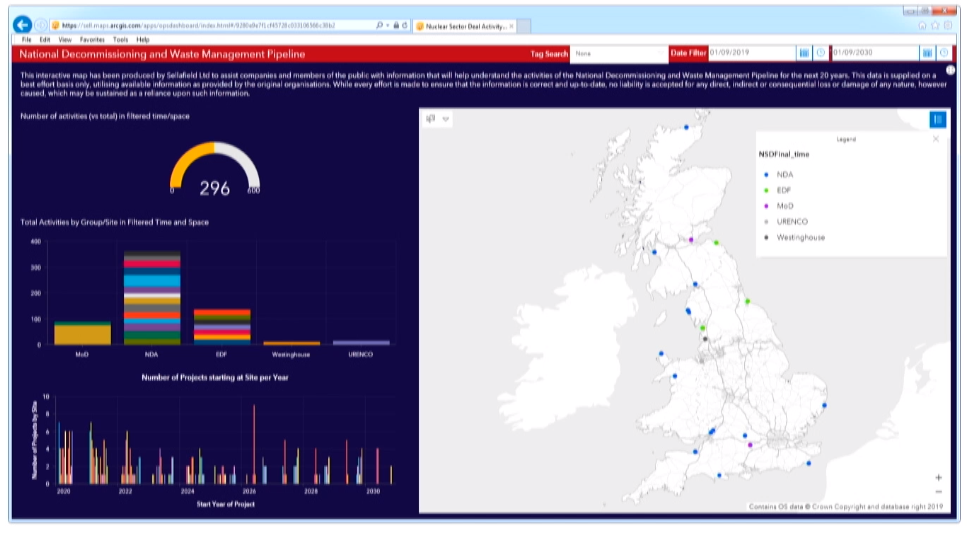 Alteryx has only been in use at Sellafield Ltd. for 18 months, but they have already seen tremendous results. There are many complexities to nuclear work and using advanced analytics, like machine learning and spatial analysis, is making it more safe, effective, and less time consuming. As a direct result of Alteryx, Sellafield has seen improved safety at their plant, shaved off months of effort, and increased their operational efficiencies. The company continues to create new use cases with Alteryx and plans to expand platform usage in the future.