After hurricanes Irma and Maria, Atkins, a contractor to the US Federal Emergency Management Agency (FEMA) used Alteryx to blend over a dozen GIS and tabular data sets to predict the extent of structural damage. The model was updated and revised daily to improve the quality of predictions, saving thousands of hours of field work and expanding recovery and reconstruction efforts in Puerto Rico and the U.S. Virgin Islands.

Following hurricanes Irma and Maria, FEMA needed to inspect all impacted buildings within the Special Flood Hazard Area to determine if they were more than fifty percent damaged. Historically, this has been a very labor-intensive process that required a team of two to three people spend an hour at each damaged structure to conduct inspections. The sheer size of the disaster made this an impossible task.  It would take several years to get through all the buildings using the traditional process. 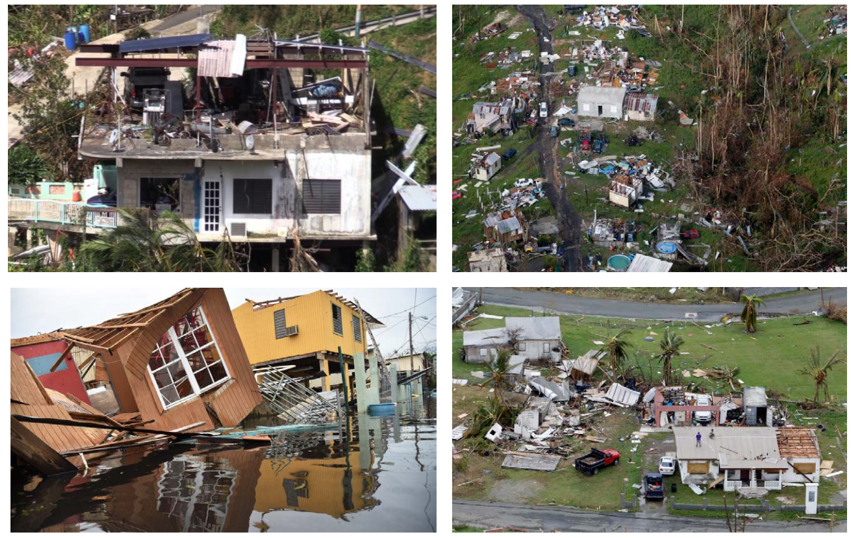 The strategy was to use Alteryx to estimate the structural damage that had occurred, prioritize areas that still needed some sort of human inspection, and ultimately reduce the total number of in-person inspections so that the recovery process could begin quickly. Alteryx was used to blend over a dozen data sets and the following variables to predict damage:

Atkins determined that they needed to get three functional groups of teams out to the field quickly.  The first team used a geographic information system (GIS) to find the locations of damaged structures.  The second team collected the information on the structures, and the third team built the analytics model in Alteryx.

The data that was feeding the model came from very disparate sources. They accessed data from the European Union, NOAA, the National Weather Service, FEMA, and the Army Corps of Engineers. This data was stored in various formats that required cleansing prior to blending, and creation of indices between the data set.  Alteryx was used for all of these tasks.

Atkins ultimately decided to use the Boosted Regression Decision Tree model in Alteryx.  The Engineering Team loved the output from this model as it showed all the variables and which ones were the most important.  While many variables were obvious, like building type and roof type, others were less expected.  The team could see the relationships between the variables and gather more data if new factors were discovered.

As they got deeper into the analysis, they started to see things that were not quite as intuitive.  For example, they noticed the areas that were oriented northeast and northwest on ridge-lines got a lot more damage. The Atkins engineers knew that there were effects from the mountains. That's a well-known factor in wind engineering, however, it would have been almost impossible to quantify given the time available. The model did a great job of illustrating that information.

Describe the benefits you have achieved
At the end of the day, what did all of this accomplish? This project helped over 100,000 people get on the road to recovery more quickly. It cleared a significant hurtle for them as far as rebuilding their structures and it gave the communities information that they really needed to start reconstruction.
They evaluated about 146,000 structures, of which about 30,000 of needed an on-the-ground inspection. The net result was that only about 21% of the total needed further inspection, which saved tens of millions of dollars in the response effort. It also saved years in terms of the amount of time that it will take to recover in some of those communities. It was all made possible because of what they were able to do with Alteryx.
Related Resources
The entire PowerPoint presentation can be found attached below. Additionally, visit this link to watch the entire recorded session.
Attachments
Labels:
7 Likes
Share
Contributors
Labels