An AD Group was added to the Gallery and specifically assigned a role (i.e. Viewer, Artisan, Curator); however, when a user that belongs to the AD Group signs into Gallery, that user is assigned the role "Default."  Shouldn't the user be assigned the specific role that was given to the AD Group?


The Default role at the user level will assume the AD Group role (if the AD Group is added to the Gallery) and not default to the Users category role. 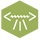 As I understand it a user does not have an assigned role (other than Default) until one is manually set for them by a Curator on the user record in the Gallery. I could be wrong in this but it's the way that the Gallery worked in 2018.3 which is my experience prior to users being re-organised in more recent versions.

In the documentation I think you are confusing a users assigned role with their effective role. It would be good to get some confirmation from an Alteryx insider but this is the way that I believe it works...

If a user signs into the Gallery then their assigned role, until it is specifically updated, will be Default.

If that user is a member of an AD group with an assigned role then that user's effective role will be the role assigned to the group.

Otherwise the user's effective role will be the Gallery default role set on the Configuration page.

Indeed, the effective user's role is taken to be

The above are three different ways of saying the same thing as what's at the bottom of the Help page on User Roles and Permissions in the box labeled "Understand Role Hierarchy."

Please see my proposed idea for a change to the Users page that would assist with this...