Alteryx Server is a cloud-hosted or self-hosted application for publishing, sharing, and executing Alteryx Workflows. In a Server deployment, users can publish Designer Workflows, Macros, and Analytic Apps to a private Server hosted on your company's server infrastructure, or in the cloud. Once published, these workflows can be scheduled or shared with other users to collaborate and view the results.

A follow on to the above testing workflows scenario, but with a focus on governance and control.  Many organizations have found success with an approach where Designer users build Workflows and publish them to a Sandbox environment for review, and then the Sandbox environment has approvers that review the Workflows, and if all standards are met, promote to the Production environment.  As organizations grow and add users to the Alteryx Server environment, this creates a standard publish process to ensure production can scale with the user base to ensure it operates efficiently. 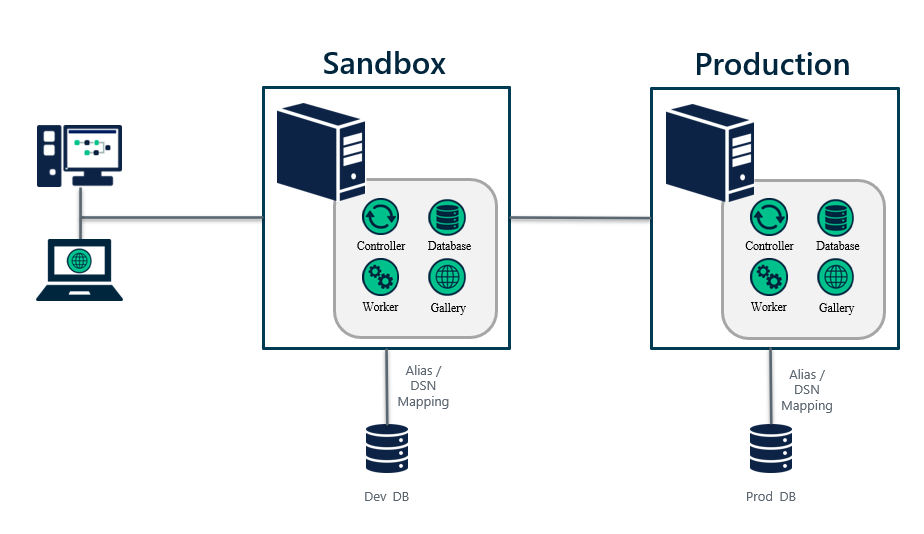 A sandbox environment provides a safe place to test software changes before rolling them into the production environment.  This can include both Alteryx Server version upgrades and patches, as well as Microsoft Windows Server updates.  Additionally, IT might need to reconfigure network or firewall rules to adhere to the latest security standards.  Validating these changes don’t impact the Alteryx workflows in a Sandbox environment will ensure that the same changes when applied to Production won’t impact those business-critical applications.  Finally, Alteryx Server allows connectivity to hundreds of data sources through connectivity leveraging ODBC, OleDB, APIs, etc…  If any data source driver versions or config changes need to be applied, testing these in a Sandbox environment will ensure those data connections are successful before applying to the production environment.

An Alteryx Server environment allows for extensive customization through configuration settings at the Gallery, Worker, Controller, and Persistence layer.  From time to time, an organization may wish to modify these system settings to reconfigure components like MongoDB, authentication, or even logging.  It is recommended to make these changes in a Sandbox environment first to confirm the desired behavior, and ensure no unforeseen issues arise.  Then the settings can be promoted up to the Production environment.

The Alteryx Server Sandbox provides an organization the ability to separate business critical production job execution from developers who are building and testing new applications while also giving IT an environment for testing patches, upgrades, and configuration changes. If you have any questions about the Alteryx Server Sandbox, including how many licenses and seats are recommended for your goals, please reach out to your Alteryx representative.