High availability (HA) is a characteristic of a system intended to maximize uptime and minimize recovery time and data loss from a system failure.
The four primary components within Alteryx Server are the Controller, Worker, Gallery, and Persistence Layer. The Controller serves the role of orchestrator. It manages the job queue and schedules. The Worker executes Alteryx workflows. The Gallery supports a web application, web server, and APIs. The Persistence Layer (MongoDB) stores application data. Implementing Alteryx Server HA implies deploying an architecture that will allow each of these components to continue to function when a system failure occurs.
The techniques used to increase system availability and eliminate a single point of failure for Alteryx Server include replicating nodes (i.e., machines) in an active or passive mode, using third-party technology for Controller node failover, and implementing a distributed Persistence Layer.
While maximizing system availability seems intuitive, deploying system components on multiple redundant nodes comes with increasing costs and administration complexity. Each organization will need to decide the degree of availability for their Alteryx Server environment that is suitable for their needs based on service level agreements (SLAs), and acceptable cost and complexity.
Larger deployments may already consist of horizontally replicated Galley, Worker, and Persistence Layer nodes in order to meet performance and scalability requirements. In this case, adding HA for the Controller may complete the HA architecture. Conversely, in small environments, implementing a single passive node with automated third-party failover and a distributed Persistence Layer may provide the necessary HA capabilities.
This paper presents two examples for implementing high availability for Alteryx Server. The first example shows a larger deployment with replicated nodes. The second example applies to smaller deployments with fewer nodes. Other variations are possible based on customer-specific requirements. The decision to distribute Alteryx Server components on one or multiple nodes based on processing capacity requirements should be determined through a Server Sizing activity. Contact your Alteryx Representative for more information.

Figure 1 shows an example of distributing Alteryx Server components across multiple replicated tiers and data centers. The need for multiple nodes can be determined based on Server Sizing analysis, HA requirements, or a combination of both. The extent to protect from data center outages is a customer decision. 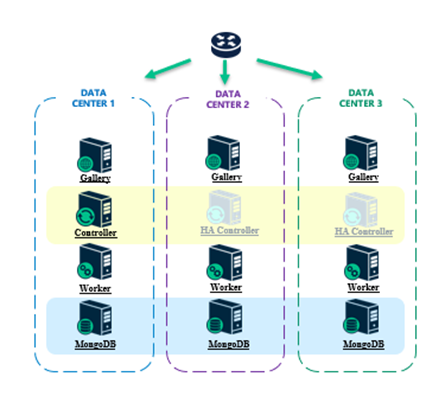 Worker HA is enabled by deploying multiple Worker nodes. These can be in the same or different data center depending on HA requirements. When Worker tags are used, a best practice is to have at least two Workers with each Worker Tag to provide redundancy.

Persistence Layer HA in this example is enabled by deploying a distributed MongoDB with replication using either a user-managed MongoDB or the MongoDB Atlas database service. A user-managed MongoDB instance is installed, configured, and managed on infrastructure remote to Alteryx Server by the customer’s IT team.  Conversely, as a database service, MongoDB Atlas eliminates the need to procure infrastructure and can reduce administration. See the MongoDB Atlas documentation for information on potential benefits and cloud deployment options. 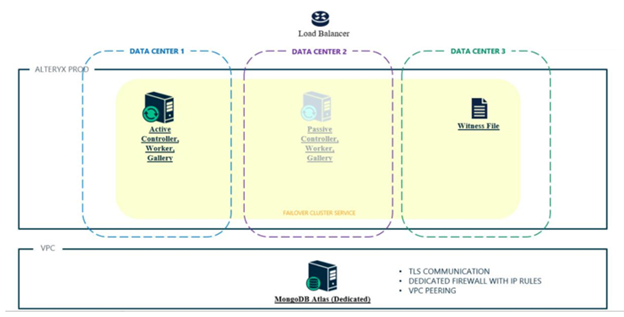 In this example, the HA Controller, Worker, and Gallery components are deployed on a single passive node. As with the previous example, Microsoft Failover Clustering is used to switch to from the primary to standby Controller should the primary Controller become inactive. However, in this example, a witness file as opposed to a second passive Controller node is used. When a witness file is used, the cluster can only survive one Controller node failure, however the infrastructure and Alteryx HA license for a second standby Controller is avoided. See Understanding cluster and pool quorum for more information on the use of a witness file. A third-party load balancer is required to direct traffic to the Gallery machines.

As in the previous example, a user-managed MongoDB or MongoDB Atlas is required to provide database high availability. In smaller deployments, the MongoDB Atlas database service may be preferred because the customer does not need to deploy machines and install software for the database. Also, some administration tasks such as performing backups are provided through MongoDB Atlas.

The Alteryx Server for High Availability license is used in this example to license the passive Controller/Worker/Gallery node. MongoDB Atlas or user-managed MongoDB are licensed from MongoDB, Inc. 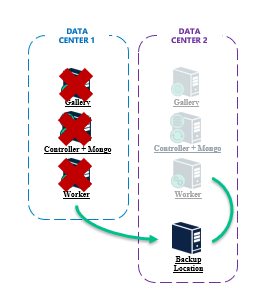