After the Designer installation, the separate Predictive Tools installation is not yet complete. 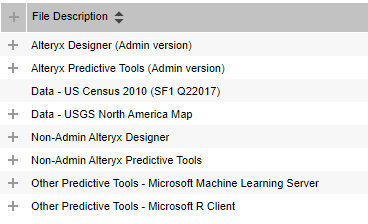 Installation of the incorrect version of the Predictive Tools download occurred.

Be sure to install the version of the Predictive Tools that match Designer, either non-Admin or Admin.

There are additional initialization files beyond those generated by the Predictive Tools installation.

Designer will check three locations for the initialization (.ini) files that contain settings by needed by R based tools that run in Alteryx.

These .ini files include the folder location of plug-ins and tool macros. The correct version of the R libraries and modules is included in the .ini file settings as well. Note that all tools in the Predictive Tool Download need information from the R folders in the initialization settings to run.

When there are custom tools from the Alteryx Public Gallery, or other applications besides those from Alteryx referencing R libraries and modules, there can be initialization settings that misdirect Designer to the wrong folders. For example, an additional .ini file may point to the location used a non-Admin version of Designer even after the version of Designer changes to Admin.

The .ini files installed by the Predictive Tools Download are listed below. Note there are separate lists for the non-Admin and Admin versions of Designer.

Check the folders containing the .ini files listed above to see if additional .ini files exist. If there are more .ini files, open each file and look for folder paths with an R folder such as R-(version_number) or R-library. If such as path exists in the file, then close it, and temporarily move the file to your Desktop. Then, close and re-open Designer and see if the missing tools appear.

If the moved file is still needed (to run a custom tool, for example), edit it with the correct settings matching those found in the default files from the Predictive Tool Download, and then return the file to the original folder.

For example, this is the correct location for the plug-in files used by an Admin version of Designer.

Here a fictitious example file that still has an R folder path for non-Admin version of Designer, even though the workstation has the Admin version. The file should be corrected or removed if obsolete.

How to install the Microsoft R Client Predictive Tools