You deal with paths every day to browse to your data. This topic delves into detail about paths, defining the different types, and how Alteryx manages them.

On occasion, you may see the term pathname or path name. Path, pathname, and path name are synonymous.

The Windows convention is to use a backward slash (\) as the separator in a path.

Another way is to convert paths into Python raw strings using the r directive, as shown below. This instructs Python to ignore backslashes.

An absolute, or full, path begins with a drive letter followed by a colon, such as D:. 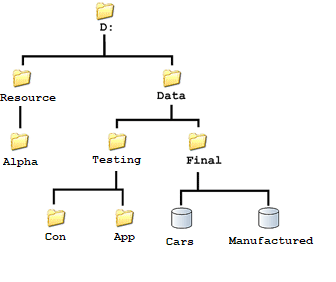 If you wanted to navigate to the Con directory from the current directory (App), you could type the following in the Windows Explorer Address box:

Absolute and relative paths in Alteryx

When working on an Alteryx workflow, you can specify that paths will be stored as relative paths. To set this option, look under the Options menu  > Advanced Options > Workflow Dependencies. Here, you can specify whether to store absolute, relative, or UNC paths. 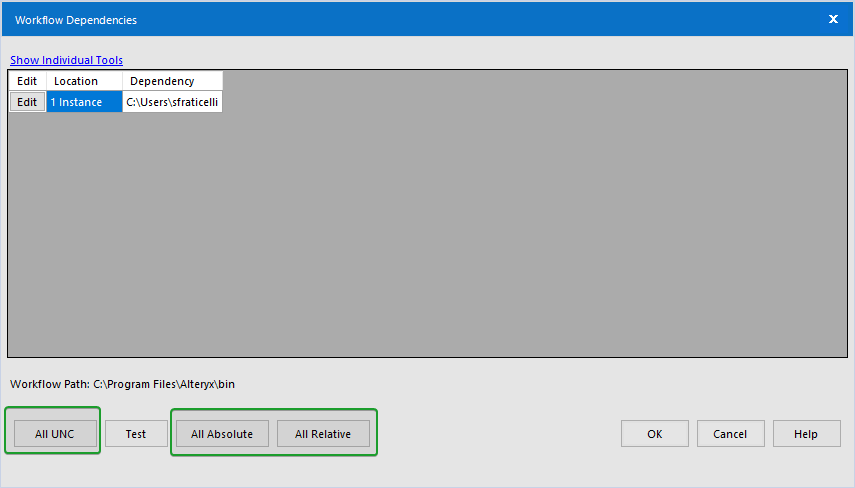 When you save the document with relative paths, the application converts paths into relative paths (using the dot/double-dot notation) relative to the location where you stored the document (the current directory). For example, if your document is stored in

and one of the files you use in your workflow is

setting the "All Relative" options would give the following:

If you click the "All Absolute" button, Alteryx converts the stored relative path from the dot/double-dot notation back into the absolute path representation.

Only paths on the same disk are converted

Relative paths cannot span disk drives. That is, if the workflow is on drive D, you cannot use relative paths to navigate to a directory on drive E. When you store your map document using relative paths, only those paths that are on the same drive are converted.

Why use relative versus absolute paths?

For example, consider the directory structure below. In this example, D:\Tools\Prod\mod.yxmd contains a tool that uses D:\Tools\Storage\output.txt. 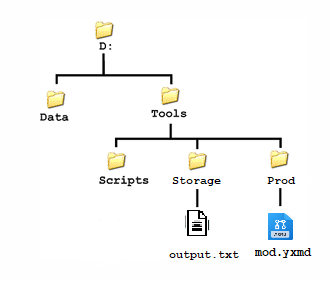 Using absolute paths, if you moved the workflow from D:\Tools\Prod\ to a different disk, such as E:\Final\Prod, ArcGIS will find D:\Tools\Storage\output.txt and everything will work fine. If, however, you use relative paths, Alteryx will not find the file and the workflow will error. You will have to open the workflow and enter the correct path to the file.

On the other hand, if you use relative paths, you can simply copy the folder D:\Tools anywhere on anyone's computer and everything will work. This won't work if you use absolute paths, because the recipient could copy the folder to F:\NewTools and the path D:\Tools\Storage\output.txt won't exist on their computer.

UNC stands for Universal (or Uniform or Unified) Naming Convention and is a syntax for accessing folders and files on a network of computers. The syntax is as shown:

followed by any number of directories and terminated with a directory or file name.

The computer name is always preceded by a double backward slash (\\).

In UNC, the computer name is also known as the hostname.

These are a few rules for UNC paths:

In Alteryx, you can use a UNC path anywhere a path is requested. This is particularly advantageous for shared data on a local area network (LAN). Data can be stored on one computer and everyone with access to the computer can use the data, as long as the computer is not turned off or removed from the network.