This document outlines how to modify a workflow so that it can be opened by a prior version of Alteryx.

If you have a workflow saved from a newer version of Designer than the one you are running, you may have problems opening it to modify or run.  This can also be an issue if you are attempting to publish to Gallery, but your version of Designer is more recent than that of the Server.  The most certain way to handle this is to upgrade to the newer version.  Sometimes, though, that is impractical.*  The following steps are not guaranteed to work seamlessly in all cases because tools change from time to time, and although backward compatibility is intended, you might have to modify your workflow to make it all work correctly.

In the earlier days of Designer (prior to version 11.5), this was a non-starter, but now you have the option to open the workflow anyway, just by clicking OK. 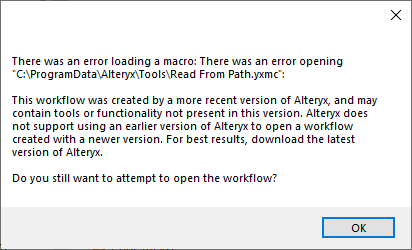 There are a couple of other situations, though, when you have to fall back on manually editing the xml code of the workflow to achieve the same thing.

If you are trying to import a workflow package (with a name such as example.yxzp) that was created in a more recent version, then you are likely to see this error saying that the Import process has ended in failure: 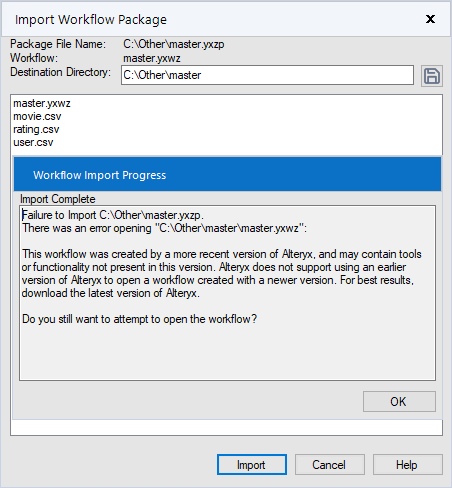 Clicking OK here will just close the pop-up without actually opening the workflow.

To get the package to open, you need to manually edit every workflow in the package.  In this context "workflow" can include files ending in .yxmd, .yxmc, or .yxwz.  The easiest way to do it is to use 7-zip, a third-party program that is wonderfully versatile.  Once you've installed 7-zip, you can follow these steps:

What are the risks of opening a workflow in an earlier version?  Alteryx doesn’t guarantee the serialized tool format and configuration will be consistent from version to version– though it normally is. The universe of tools that exist is continually growing. If Alteryx can’t find the tool, the Designer will add an unknown tool:

This can generally be resolved by finding the missing tool and replacing the unknown with the known. If the unknown tool happens to be macro, use the same process to change the version for the .yxmc file.  After you save it, you can replace your macro.

What are the risks of installing the latest version?  Designer is only compatible with Server if the Server version is the same as or higher than the Designer version.  If you upgrade Designer on your desktop, you risk upgrading past the Server version your company is running.  In that case, you would not be able to successfully save any workflows from Designer to the Gallery.

You can run more than one version on your desktop at the same time if one is an Admin version and the other is a non-Admin version.  This could allow you to publish to Gallery from the older version, even if the newer version does not allow that.  Keep in mind, though, that when some of the embedded features are version-specific, this might be more troublesome than it is worth.  One example would be version 2020.3 or earlier, paired with version 2020.4 or later.

Quite happy for my post to reposted - FWIW I correct it after the first version and I think v10.6 uses a yxmdVer is actual 10.5.

I tried this process in an attempt to run a 11.0 workflow on 10.6 and couldn't get it to work - The "This document was created by a more recent version of this application and cannot be read" error still appeared when I tried to open the altered workflow.

Does this workaround not function with 11.0?

Question: Given this method is available to make a tool backward compatible - which can't Alteryx be backward compatible by default? I understand that in the latest versions there may be a new tool which has been used in the workflow which was not present in previous version and Alteryx could be smart enough to identify that and prompt for the same.

Since the original posting, Alteryx has released a number of new versions of Alteryx Designer.  Thought I would update it a bit by sharing some new information.  The chart below shows which yxmdVer = XX.X value to use.

If you have developed a workflow in v11.5 and someone using v10.6 wants to run it, find v10.6 under Alteryx Version in the chart above and the yxmdVer on the left side is the value you use modify the code (in this case, it would be v10.5).

I have made an "alteryx downgrader" app which basically takes a workflow/macro as input and downgrades it to 10.5. Have fun!