check if the ID exists...

Thanks for your time. I have this scenario where i need to look if an ID exists in the prior month or prior consecutive months or in any month and the months are not consecutive....

I have the dataset something like below.. Inventory Number  which will have rows when there is failure...each inventory number will have multiple records (12 months) if the inventory number is failed in each month then there will be 12 records if it is not failed at all then there is no record at all for that inv number.. what i need to derive is something like MonthlyFailStaus and MonthlyFailStatusDesc so that the records can be grouped into certain buckets

Failed in consecutive 3 months - This inventory number failed in the consecutive months (calendar is Jan to Dec) - say for example it failed in Jan, Feb , March

Failed in consecutive 2 months - this inventory number failed in the consecutive months like Jan, feb  or any month like Oct,Nov  (failed 2 times in 2 months straight)

Failed in more than 3 Consecutive Months:this inventory number failed more than 3 times in the consecutive months like Jan, feb, march and april

any suggestions on the best approach.. i have few diff data sources in alteryx workflow where i use join and union --thanks a lot

I've created a workflow that I think answers your question.

Since we are mostly interested at what months and year each failure happened, I've used a formula tool with a datetrim function to force each start date to the first of the month. 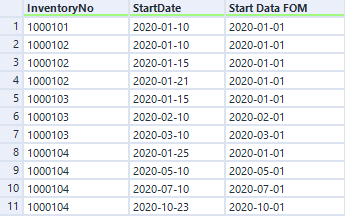 That allowed me to then use a summarize tool to group on the inventory number, group on the new field and count the number of failures occurring for each inventory each month

Then, with a multi-row formula tool, I was allowed to decide whether for a particular inventory, those failures occurred in consecutive months and if yes, then flag them with a "C". If not, flag them with a "N".

Note how the first failure for each Inventory No does not have a flag assigned. That will be important later on. Then again by using a summarise tool, I was able to group on the Inventory No and concatenate the field containing the flag.

Hence, now I know the following:

The final step was to implement this logic inside a formula tool. It's not very delicate, but it get's the job done.

Let me know if that was what you were after and please feel free to ask any questions. Thanks for the challenge.

Thank you so much for your time, let me first try to understand so please give me sometime to look at it and see how it is working... i will get back to you for any questions then we can flag this thread as closed

and we would like to keep the dataset with duplicates the reason is we also have some other columns where the inventory number will have duplicates because of some diff values in a field for ex;

Inv12345 which has 3 consecutive fails and some other columns like status has values like cancelled, in progress etc.

Do you mean something like this as an output? 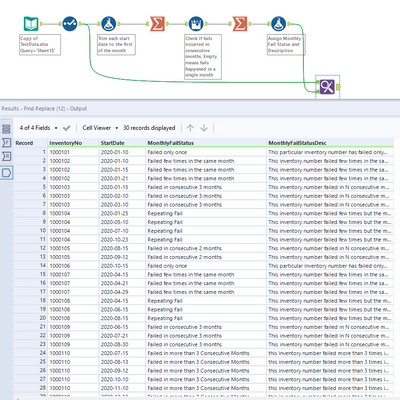 Was that helpful at the end? Did you manage to solve this?

Hi Angelos, thank you so much. It really worked. find and replace tool - never used it. i thought we might have to do some joins