I also think I may be getting tripped up on the caching that happens with some of the INDB browse tools. But before trying to guess what the problem is, I should probably just state the issue and let you guys have a go at it.

I have a workflow that is fairly complex, but ultimately the section I'm working on does an INDB-INNER_JOIN on two populations. I have pared them down to a population of two on each side of the join.

I've been working on this for about 2 hours, so, please excuse my exasperation.

Upstream from the join, I am doing a lot of INDB filters based on the business logic at hand. I then count those, union them, and stream them out. I have a feeling the UNION in-db is not performing correctly.

OK, time for explanations and pictures.

After the first filter, I have an expected 6 records.

After the second filter, my browse tool and my counting methodology are showing 0 records.

This is Incorrect: there are no null email addresses for this population.

Here's the output from the browse on the first tool proving that the email field is not null:

So, further downstream-- we come to our join.

Now, if there were truly 0 records, there would be no data coming in on the left side of this join. But:

Somehow in the 'first 3 records' browse there are 0 records, but after a summary (downstream!), there are the 2 records I'm expecting.

Now I get to the join, and things work (even though upstream, several times, I have seen 0 records) . 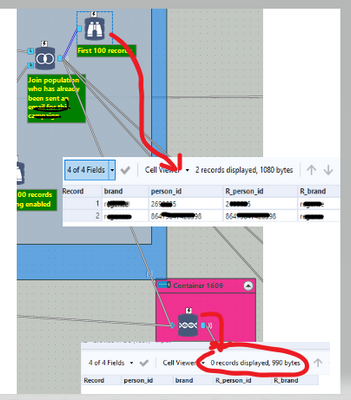 But then, it gets weirder: if I put the output of the join into an INDB Union tool with another, similar output (that has 0 records currently), I end up with 0 records: If I port that same data stream directly to a SELECT, I get 2 records. And if I send it to a data-stream out tool: 0 records. 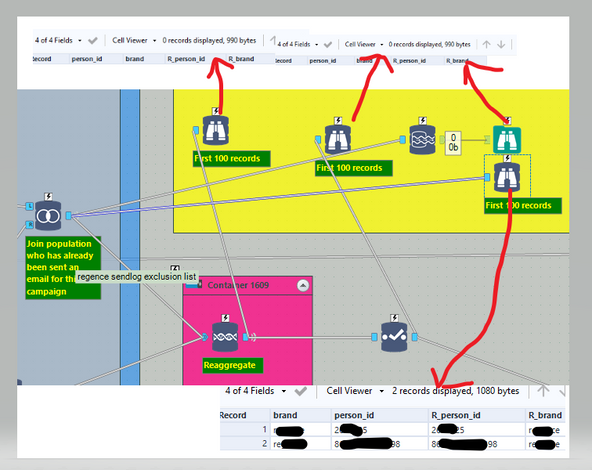 What is happening? The INDB tools seem to be randomly generating output. I feel like the caching behaviour is being super inconsistent. And I keep trying to manage that manually, but I also am finding stuff that has nothign to do with caching acting haphazardly.

I made a few changes, and the browse tools are just completely inconsistent.

I'm trying to disable and clear cache manually and save the file, but I still am not getting consistent results in my count and summary areas of the workflow. The age filter now works in one browse, but on another, it shows 0. The email not-null filter shows 0 in both accounts.