I am searching for inspiration. I received a really strange file with a relationship between one and more companies.

I am a data in this structure:

From this I need to prepare something in this format:

Later it becomes even more complicated. I removed companies to name but it should give an idea: 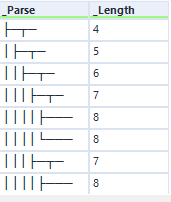 Do you remember there was a similar issue in the community which I could check in order to find some kind of inspiration for this one?

Find the nesting level by counting the number of next level box characters("└","├" and "│") in the line. Then build the entire company hierarchy for each company and extract the immediate parent from current hierarchy

It works for your initial set, but you may have to tweak it for the full data.

I think this is the right course of action 🙂

Definitely, it is very helpful. I will accept your post as a solution, but I want to see if other people have other ideas.

Your solution games me the necessary inspiration to finish my task. Your idea of counting specific signs was brilliant.

Thank you for your help you are awesome! 😀

I have a question as I am quite inexperienced in regex:

Could you explain how this one works?

(.*?)(\<.+)  The pieces between the () are capturing groups and represent the bits you're trying to match in the string.

(.*?) The period matches any character and the * represents 0 or more times.  The ? means stop the first time you hit the next character in the match string. In your case it's the first < in the string. Without the ? the match is what's known as greedy and will match all characters until the last <

Thank you very much for a detailed explanation. It is very helpful!

Apologies to bother you again but I want to create documentation in which I will explain in details how my whole workflow works.

I have one last piece missing. When you will have a moment could you kindly explain to me how the regex below works?

Regex can scan through the string multiple times and can change scan direction at various times to make the entire regex expression match the target string.  This is one of those cases.  The initial ".*\|" matches any sequence of characters up to the last "|" since it doesn't include the "?"(see previous post).  Using the target string above, this would normally match the second "|", but since the engine is trying to match the entire expression, it then starts looking backwards to try and match the next part as well.  The next part is "(.*?\|.*)".  Starting from where the first part finished, and adding back one character at a time, the engine can match "Company B|Company BA" to the second part. The section before this "Company A|"  can also match the first expression so the last position where the target string is matched by the entire regex expression is the second last "|".

The actual effect of this is that the expression will match the second last "|", so if the target has multiple "|" it will always return the text after the second last one

The outer regex_parse, "(.*)\|.*", takes the output of the first, "Company B|Company BA" and matches everything up to but not including the last "|" retuning the parent "Company B"

Thank you for the detailed explanation! It is very helpful!